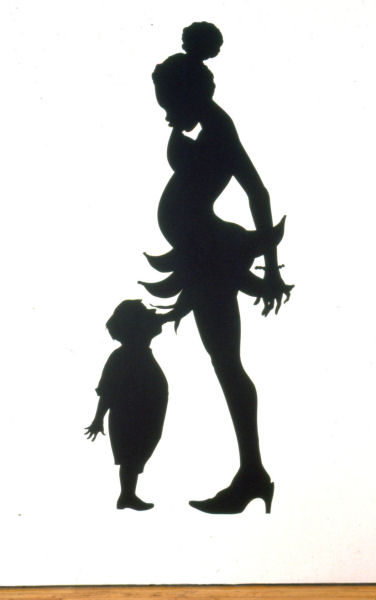 American silhouettist, printmaker, painter, installation artist, and filmmaker. At the age of 13, Walker moved from California to Stone Mountain, GA, when her father, the painter Larry Walker (b 1935), accepted a teaching position at Georgia State University. She received her BFA at the Atlanta College of Art, GA, in 1991 and her MFA at the Rhode Island School of Design, Providence, in 1994. In 2001 she began teaching at Columbia University School of the Arts in New York.

Walker’s work explores issues of race, gender, sexuality, and identity through paper cut-out silhouettes of scenes depicting slavery and plantation life in the antebellum South. Often life-size and spanning an entire wall or room, Walker illustrated racial stereotypes with exaggerated representations of mammies, pickaninnies, and sambos, alongside white southern belles and gentleman engaged in acts of violence, torture, and sex (e.g. Consume, 1998). Using the silhouette, a 19th-century craft created mostly for the middle class, Walker initially seduces viewers with a polite, delicate, and feminine veneer; she compared the technique of silhouettes to the nature of stereotypes themselves, in which the complexities of an individual or situation are reduced and simplified into easily identifiable forms. As all figures are depicted in black or in shadows, racial identity can only be approximated by their profile or actions. As a result, viewers create their own narrative, thus implicating themselves in the creation and perpetuation of these stereotypes. 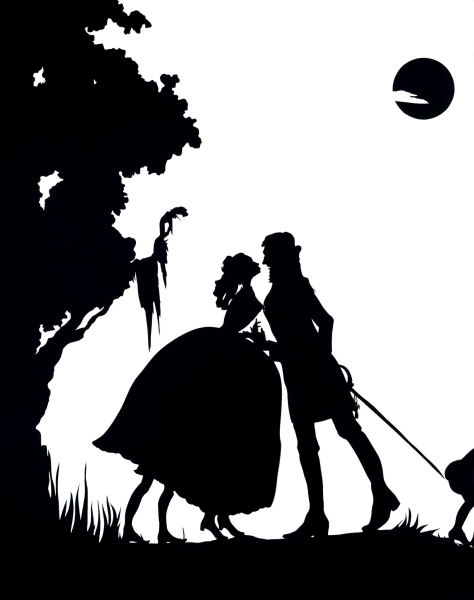 Kara Walker: from Gone: An Historical Romance of the Civil War as it Occurred Between the Dusky Thighs of One Young Negress and Her Heart (image 1), cut paper and adhesive on wall, 3.96 × 15.24 m, 1994; photo courtesy of Sikkema Jenkins & Co.

Walker first rose to fame in an exhibition at The Drawing Center in New York of her work Gone: An Historical Romance of Civil War as it Occurred Between the Dusky Thighs of Young Negress and Her Heart (1994; see fig.), a narrative on a southern plantation influenced by Margaret Mitchell’s novel Gone with the Wind (1936). In this series of vignettes, viewers have described a white gentleman flirting with a lady while pointing a sword at his bastard child who holds the neck of a swan while the Negress slave floats in the water (see fig.), squeezes out babies, or is carried away on the shoulders of her master who buries his head underneath her skirt (see fig.). The Negress, or the “nigger wench,” appears frequently in her works, and much speculation has been made about Walker’s personal identification with this figure. Another prevalent theme is the classical myth of Leda and the swan with its allusion to miscegenation, as seen in the swans that frequent her illustrations. Walker’s influences are plentiful, ranging from Harlequin romance novels, slave narratives, minstrel shows, and Black memorabilia, through to history painting, Andy Warhol and Pop art, Robert Colescott, and Adrian Piper.

In 1997, at the age of 28, Walker was the youngest person to be awarded the prestigious MacArthur Foundation scholarship, an honor that engendered much public criticism. In particular, the artist Betye Saar, well known for arming images of Aunt Jemima with a rifle or other weapon, embarked on a letter-writing campaign condemning Walker for the way she portrayed negative racial stereotypes rather than attacking them. The controversy let to a symposium in 1998 called Change the Joke and Slip the Yoke at Harvard University, accompanied by an exhibition of Walker’s work, about the use and value of stereotypical African American imagery in contemporary art and the collection and exhibition of Black memorabilia.

In the spring of 2002, Walker represented the USA at the 25th São Paulo Biennial with the 26 m cyclorama Slavery! Slavery!, based on the famous grand-scale painting and diorama in the round in Georgia depicting the Battle of Atlanta (see fig.). Continuing this interest in creating a space of illusion where viewers are included in her narratives, Walker began using projected silhouettes and colored lights in her installations, where viewers see their own shadows cast onto the wall, alongside the cut-out figures (e.g. In Insurrection! (Our Tools Were Rudimentary, Yet We Pressed On), 2000). Walker further extended the possibilities of transforming the flat, two-dimensional silhouettes into theatrical performances in works such as Fibbergibbet and Mumbo Jumbo: Kara E. Walker in Two Acts (2004) and films such as Eight Possible Beginnings Or: The Creation of African-America, Parts 1–8, A Moving Picture By: Kara E. Walker (2005; see video still 1, still 2, still 3, still 4, still 5), Walker’s second film, which tells the story of creation using silhouette puppets that act out scenes of plantation work and master–slave sex. 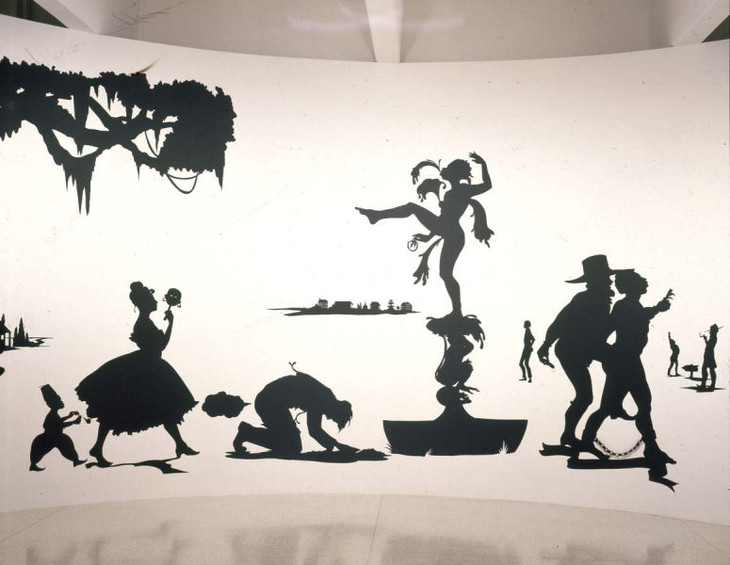 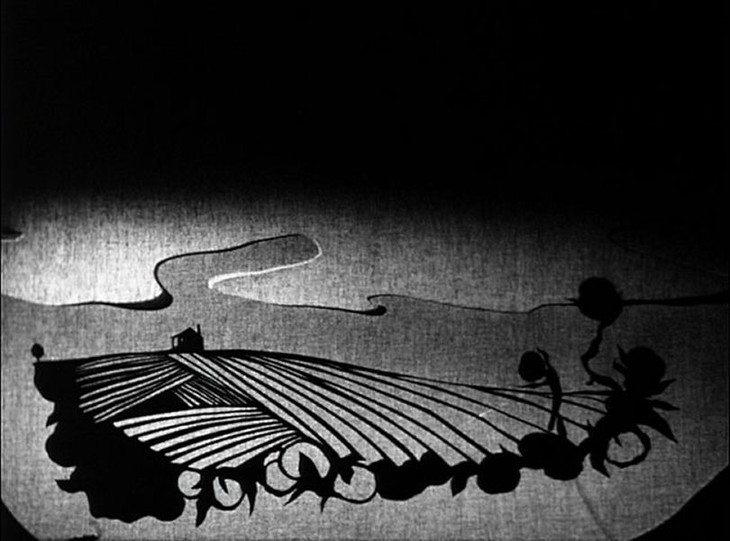 In 2019 Walker unveiled Fons Americanus as part of the Hyundai Commission for the Tate Modern in London. The 13 m tall fountain critically responded to the Victoria Memorial fountain in front of Buckingham Palace, connecting the earlier version and the history it represented to Great Britain’s role in the transatlantic slave trade. Fons Americanus was decorated with maritime imagery and figural scenes referencing the Middle Passage through well-known paintings of J. M. W. Turner and Winslow Homer.

Walker presents viewers with a retelling of the Black experience where fact and fantasy are blurred and distinctions between good and evil, and black and white disappear. Her figures are engaged in a power struggle, full of desire and fear, between domination and submission. Through these images, she exposed the absurdity, insanity, and paranoia of the USA’s obsession with race, which manifests itself, according to Walker, in a need to overcome racism as well as a fear of what may happen if race no longer becomes a primary means of categorizing and understanding society.