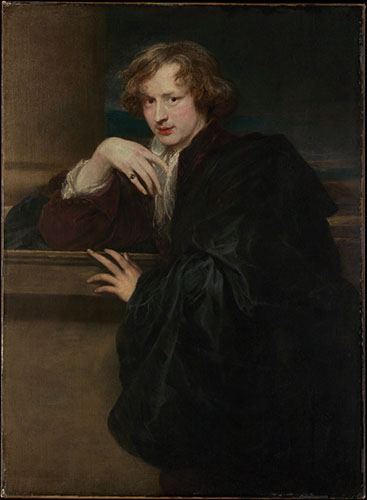 Anthony van Dyck was 11 years old when his father, Franchois van Dyck, a wealthy cloth and silk merchant, found him an apprenticeship with Hendrik van Balen the Elder, with whom he stayed for two years before entering Peter Paul Rubens’s studio. Rubens had just returned from Italy and, struck by Van Dyck’s aptitude, wasted no time in training him in his new style. Rubens considered him to be the best of his pupils, and Van Dyck collaborated on many of his master’s great religious works. Rubens, who promoted his own work through engraved copies, saw to Van Dyck’s training in engraving and etching. His reputation was made so quickly that in early 1618, at the age of 19, he was registered as a master of the Guild of St Luke and, at the same time, had set up an independent workshop in Antwerp with Jan Brueghel the Younger, although he continued to work in Rubens’s studio.

For three years, he continued to work either alone or with Rubens until, in 1620, he travelled to England, where he stayed briefly at the invitation of the Earl of Arundel, painting portraits and working for King James I. Encouraged perhaps by the earl, Van Dyck travelled to Italy in November 1621, staying in Genoa, Rome, and Venice, where he copied works by Michelangelo, Leonardo da Vinci, Raphael, Paolo Veronese, and Giorgione. The biggest single influence on Van Dyck, however, was the work of Titian, which he particularly sought out and studied. His reputation earned him several commissions from Prince Emmanuel Albert of Savoy, viceroy of Sicily, who summoned him to Palermo in 1624. He was received at court and produced works resonant of Titian, although he left Palermo hurriedly at the outbreak of plague and returned to Genoa, painting portraits of the Genoese aristocracy and continuing to study Titian’s technique until his return to Antwerp in September 1627. Van Dyck returned with a well-established reputation, and this period saw a prodigious output of portraits as well as numerous history and religious paintings and some of his best etchings.

Van Dyck’s work and reputation came to the attention of Charles I of England, who must have offered considerable incentives to entice Van Dyck to London early in 1632. Charles I gave him a generous salary and a house in a privileged area, appointed him ‘Principalle Paynter in ordinary to their Majesties’, and, in 1632, knighted him as a mark of honour, so that he eclipsed Daniel Mytens the Elder as court painter. Van Dyck lived ostentatiously, but he earned well, his studio operating a kind of production line of portraits with Van Dyck concentrating on the heads and touching up. His portraits of the English royal family (full-length and equestrian) are among his most successful and most famous, and his wide-ranging portraits of the English aristocracy largely create the contemporary image of Charles’ court. Among his other achievements was the decoration of the Banqueting Hall in Whitehall for Charles I. During his time in England, Van Dyck made frequent trips to the Continent, particularly to Antwerp and Brussels, where he continued to carry out commissions, beginning the cycle of paintings for the town hall in Brussels. On Rubens’s death in 1640, he was appointed dean of the academy of St Luke and may have considered settling permanently in Antwerp. However, he was already troubled by illness by this time and was also drained by his battle to win the competition to decorate the Grande Galerie of the Louvre, which he lost to Nicolas Poussin. Returning to London in 1641, he died, probably of tuberculosis, going into decline just a few days after the birth of his daughter. He left a large estate.

His first works, prior to his trip to Italy in 1621, reveal the influence of Rubens, as depicted in Van Dyck’s St Martin in the church of Saventhem (1621) or in his mythological paintings, such as Drunken Silenus, Jupiter and Antiope, or Studies of Four Negro Heads (1617). In Genoa, he most notably painted the lovely Portrait of Maria de’ Medici, which is one of his best works, as well as numerous group portraits, such as those of the De Wael, Durazzo, and Cattaneo families. In Rome in 1623, he painted the Portrait of Cardinal Bentivoglio. Upon his return to Antwerp in 1627, he concentrated his attentions on portraits of members of high society, whom he painted in rigorous poses and extremely sober compositions. Van Dyck was able to convey the personality of the figures he painted while at the same time suggesting something of the melancholy or Romanesque. He harmonised bright colours, delicate greys, and golden tones, and his subdued shadows made colours all the more vibrant. He sometimes preferred to sacrifice accessories in the interests of emphasising hands and faces. Around 1630, he began designing his series of engraved and etched portraits, The Iconography. Most of these portraits of artists, scholars, statesmen, and bureaucrats were made by professional engravers after Van Dyck’s paintings, but the painter also etched 18 of the plates himself. In England in 1635, he painted one of the most beautiful portraits of Charles I (Louvre), who appears with all his royal self-assurance, having no need for sumptuous clothing, painted in a bold composition in which the horse, servants, and landscape occupy a good part of the painting but do not distract attention from the sovereign’s personality.

Van Dyck helped to create a link between Flemish and Italian painting through his study of works seen in Rome, Genoa, and Venice particularly by Titian and Veronese. He remained uninfluenced by Caravaggio. The vast majority of Van Dyck’s output was portraiture, though he may have wished for more commissions for religious and history painting. In portraiture, his development of the Grand Manner portrait from Titian’s model proved his legacy of the longest standing, influencing artists down to John Singer Sargent. Van Dyck’s imaginative handling of portraiture covered a vast social range, from princes and princesses to prelates, bankers, jewelers, and merchants, young and old, posing them in a vast array of positions, placing them against personalised decors and flanking them with fashionable props and status symbols. A perfect example of this is Portrait of Elena Grimaldi Cattaneo, where a black servant carries a red parasol and the fabrics, costumes, armour, and jewellery are all emphasised, contributing to an expression of the psychology of a figure from a society built on a cult of personal display. Van Dyck’s legacy was the elevation of the genre of portrait painting, which had important repercussions for English art. He played a decisive role in the establishment of a future school of English painting in the 18th century, influencing Thomas Gainsborough, Sir Joshua Reynolds, and Thomas Lawrence.

Bayonne: Raising of the Cross (sketch); Head of St John; Head of a Young Man; Portrait of van Baelen; Henrietta of France and Her Two Children; Portrait of Isabella Clara Eugenia of Austria

Béziers: Portrait of a Man

Budapest: Self-portrait; Venus Crying over the Death of Adonis; Portrait of a Couple; The Trinity; St Eligius; Portrait of Archduke Ferdinand (after Rubens)

Darmstadt: Portrait of a Young Woman

Douai: Lamentation of Christ; Reception of St Placid and St Maur by St Benedict; Portrait of a Man

Dublin: Portrait of Frédéric Marselar; Study for a Painting of St Sebastian

Florence (Palazzo Pitti): Portrait of Cardinal Guido Bentivoglio; Head of the Virgin; Portrait of Charles I of England and Henrietta Maria of France; Rest on the Flight to Egypt

Glasgow: Rest on the Flight to Egypt; Portrait of an Old Man

Lille: Jesus on the Cross; Miracle of St Anthony of Padua in Toulouse; Portrait of a Woman; Portrait of Maria de’ Medici; Adoration of the Shepherds

Montauban: Portrait of a Monk

Nancy: Virgin and Child; Portrait of the Painter Anthony van Opstal; Portrait of Count John of Nassau and His Family

Naples: Jesus on the Cross

Nottingham (Castle Mus. and AG): Portrait of Charles I

Oporto: Portrait of a Man

Rotterdam (Mus. Boijmans Van Beuningen): Portrait of Charles I of England with His Wife Henrietta and Their Two Children

Strasbourg: Portrait of a Lady Dressed in Black; Study of a Head

Termonde (Church of Notre Dame): Adoration of the Shepherds; Christ on the Cross Surrounded by Saints

Toulouse: Christ with Angels; Miracle of the Mule; Achilles Recognised by Ulysses

Turin: Portraits of the Children of Charles I, King of England

Vienna (Kunsthistorisches Mus.): Samson and Delilah; Portrait of Prince Ruprecht of the Palatinate

Windsor Castle: Charles I in Three Poses; Portraits of the Children of Charles I