Wang Qingsong was born in Heilongjiang Province, China and studied at the Sichuan Academy of Art. His photographs have been exhibited worldwide in Canada, China, France, Italy and the USA. Wang recently participated in the 2004 exhibition, Between Past and Future: Chinese Photography and Video from China at the International Center for Photography, New York and the Asia Society, New York. In this interview, he speaks with Oxford Art editor Christine Kuan. 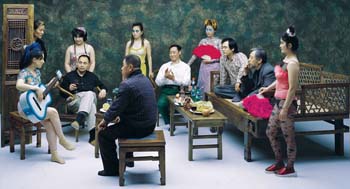 CK: It has been over ten years since Chinese contemporary art made its appearance in the West at the Venice Biennale. How do you feel the West has responded to your work and new Chinese art in general?

WQS: When I first arrived in Beijing in 1993, I heard that many of the best Chinese artists were part of the Biennale but I could hardly believe it because it's like participating in the Olympics. At that time, many people doubted whether interest in Chinese contemporary art in the West would last more than five years, as in the case of new art from Vietnam and the Soviet Union. But the sustained interest in Chinese art can be explained. First, Western curators and critics have been interested in Chinese oil painters for a long while. Second, newer artworks deal consistently with different media like installation, photography and video. And finally, China has been changing dramatically since the mid-1990s so this economic boom has sustained Western interest.

CK: Many of your works, such as Can I Cooperate with You? (2000), deal with impact of the West, modernization and its troubling effects on China. Do you see any positive effects?

WQS: I think that there are good effects, I'm just critiquing the bad effects of Western influence on China. I don't think Western culture or tradition is bad, it's just that it isn't always compatible with the Chinese environment. As the Chinese saying goes, each carrot should have its own pit. There are many Western ideas that are good in Western countries but not suitable for other countries.

CK: You also say that you think of yourself as both a journalist and photographer. What do you think of the statement 'art for art's sake'?

WQS: I think it is very meaningless if an artist only creates art for art's sake. For me, the dramatic changes in China have transformed China into a huge playground or construction site. Whenever I go into the city I feel suffocated by the pollution, social contradictions, and so forth. All of these factors contribute to the fact that artists cannot just make art for art's sake. I think it would be absurd for an artist to ignore what's going on in society.

CK: Many of your works refer to famous images from the West and from the East. For example, Courbet, Ingres and traditional Chinese painting. Do you think new Chinese art will also impact art in the West?

WQS: I think in the long run the expansion of Asian art will definitely have an impact on Western art history. For myself, I refer to other art works, like in The Night Revels of Lao Li (2000) where I made reference to the (10th century), not for the importance or fame of certain works. For intellectuals, the tragic situations of humanity never change and that is what I am critiquing. As for making references to figures and paintings by Courbet and Ingres, I am not interested in those works because they are masterpieces either. I'm more interested in those figures as human beings and inviting those figures into my own work.

CK: You were born in Heilongjiang, grew up in Hubei, and studied in Sichuan before moving to Beijing. Are there significant regional distinctions among these locations that influenced your work?

WQS: I think there are many regional distinctions that I have incorporated into my art. For example, being born in Heilongjiang Province, I remember a lot of Soviet tanks going around when I was three. At that time, China had a confrontation with the Soviet Union. When we moved to Hubei Province, many people were assigned there to work on an oil field that used to be a swamp. In Sichuan, I was in one of the most populous cities in the world and the most important memories were of all the itinerant peasant workers from Chongqing. Then, in 1993, the huge urbanization strive in Beijing also impacted my art. All of these experiences have given me a lot of inspiration.

WQS: At the beginning when I made so-called photoworks in 1996, I didn't really consider my works photoworks. I had refused to admit my works were photos, but that was the time when Chinese photography started to appear along with new media and new photography. In 2000, one critic wrote an article for an exhibition that described my art as photoworks. Then I thought, maybe I am a photographer because my ideas are put into the form of photography, since then I started to move towards photography.

CK: Is your extravagant use of colour in works like Last Supper (1997), Catcher (1998), and Romantique (2003) something carried over from your formal training in painting?

WQS: Well, I don't think my photographs were much influenced by my early training in painting. Chongqing, Sichuan was incredibly polluted and I only saw greys and blacks. Also, the professors taught painting with a lot of dark colours. It was when I first arrived in Beijing and witnessed such dramatic modernization that I felt I really wanted to use lush colours. Also, gaudy colours are an important aspect of my art.

CK: What is the most important aspect of your work? Are there photographers you admire?

WQS: I have the right and I'm capable enough to depict the environment in China because I am familiar with this society and it is close to me. Also, I can do it right and I can do it accurately. I admire some photographers like Andreas Gursky. He took some photographs of garbage, which is similar to something you would see in China every day. I just hope to continue making more and better photographs in the future.

For more information, see the artist's website at www.wangqingsong.com