The Wallace Collection in the United Kingdom is internationally known for the quality of its art works, including Old Master paintings, French eighteenth-century art and decorative art, and princely arms and armour, which were brought together by five generations of a British aristocratic family, the Marquesses of Hertford.

The collection began with the 1st Marquess of Hertford (1719–94), who acquired paintings by Canaletto and commissioned portraits of two of his daughters from Sir Joshua Reynolds. The 2nd Marquess (1743–1822) also collected works by Reynolds, as well as portraits by George Romney and Thomas Gainsborough. The 3rd Marquess of Hertford (1777–1842) was the first major collector of paintings in the family. A marchand-amateur who also bought art for his friend the Prince of Wales, later George IV, his favourite school was Dutch painting. This area remains a strength of the Wallace Collection, which holds three galleries dedicated to these works, including Caspar Netscher’s superb Lace Maker (1662), Rembrandt’s The Good Samaritan (1630), and Sir Anthony Van Dyck’s Paris (c. 1628). He did not, however, overlook Dutch and Italian Old Master paintings and in 1815 secured Titian’s Perseus and Andromeda (c. 1554–1556), the third in the series of mythological Poesie painted for Philip II of Spain in the mid-sixteenth century. 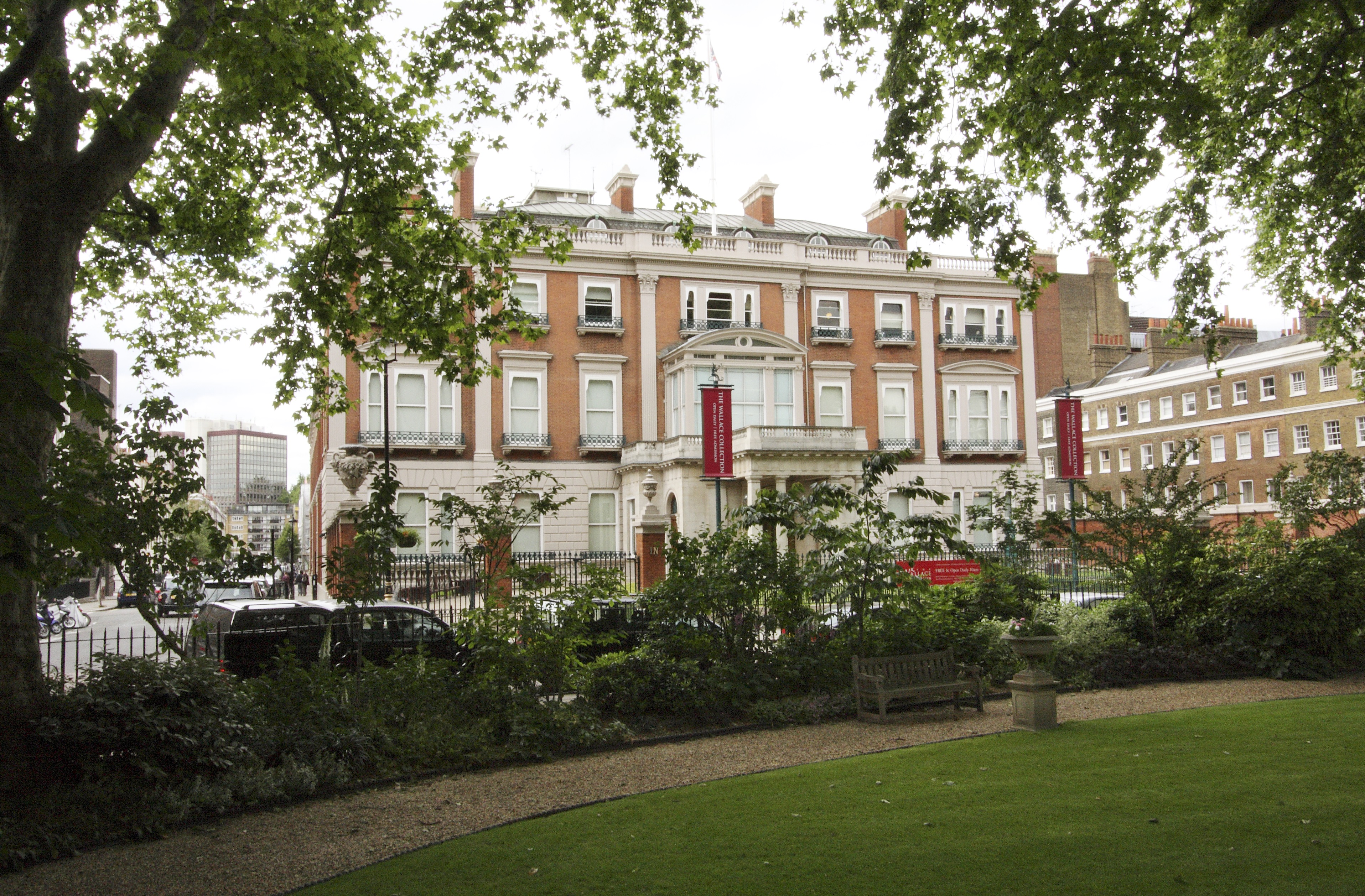 After inheriting from his father in 1870, the 4th Marquess of Hertford (1800–70) continued to build on the strengths of the collection, acquiring paintings by Antoine Watteau and Nicolas Lancret. He had a strong interest in French masters of the eighteenth and nineteenth centuries, and he also sought to acquire Italian paintings, which hitherto had been relatively underrepresented. The 4th Marquess acquired Peeter Jansz Pourbus’s Allegory of True Love (c. 1547) and the entire Northern Italian frescos and drawings of the vicomte Both de Tauzia (1823-1888), including Tadeo Crivelli’s Saint Roche (c. 1480).

The major part of the collection was acquired between 1840 and 1888 by the 4th Marquess and his illegitimate son, Sir Richard Wallace, who built up the world-class collection that exists today. It is displayed in Hertford House, an elegant eighteenth-century mansion in central London which was originally the townhouse of the family, and where paintings, furniture, sculpture and decorative arts are brought together in a way that evokes, but does not try to recreate, the private home that it once was. (Figure 1)

Both the 4th Marquess and Wallace spent most of their adult lives in Paris, and in many ways their taste in art can be seen as more French than British. In 1870 Wallace inherited the collection from his father and shortly afterwards moved to London where he refurbished Hertford House and installed more of the artworks. Over the course of the next decade he also added significant areas to the collection, such as important works of European arms and armour, Renaissance enamels, maiolica and glass, and kunstkammer objects such as boxwood sculpture, Renaissance metalwork and enamels, and jewellery. Two important British paintings, Thomas Lawrence’s Portrait of George IV and Edwin Landseer’s The Arab Tent (c. 1865–1866), one of the most popular of all the paintings in the Wallace Collection, were also bought by Wallace.

In 1897, Lady Wallace (1819-97), née Amélie-Julie-Charlotte Castelnau, widow of Sir Richard, left the collection to the British nation and it opened three years later as the Wallace Collection, a national museum. The Wallace Collection is governed by the Museum and Galleries Act 1992, under which it has charitable status. It is supervised by a Board of Trustees appointed by the Prime Minister who normally serve a three to five-year term of office. The Wallace Collection aims to preserve the collection and Hertford House for future generations to enjoy in accordance with the bequest of Lady Wallace, retaining the essential character of a family house. 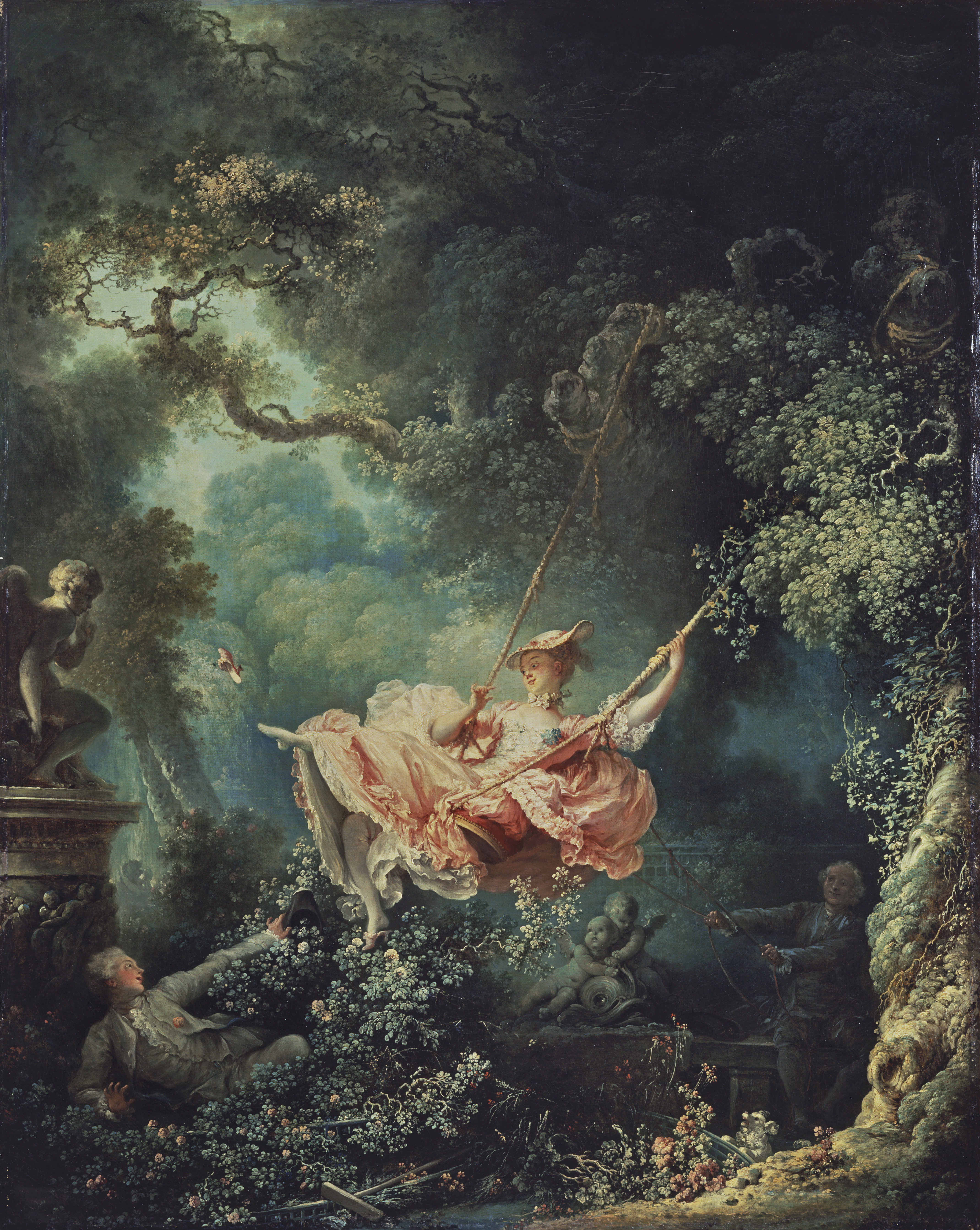 The Wallace Collection is the home of masterpieces of international repute, including Jean-Honoré Fragonard’s The Swing (c. 1767-8; Figure 2), Nicolas Poussin’s A Dance to the Music of Time (c.1634-6; Figure 3), Frans Hals’s The Laughing Cavalier (1624; Figure 4), Peter Paul Rubens’s Rainbow Landscape (c. 1636), Diego Velázquez’s The Lady with a Fan (c. 1640; Figure 5), and Rembrandt’s Titus (c. 1657). The 4th Marquess of Hertford acquired these paintings in the mid-nineteenth century, when his immense wealth made him virtually unrivalled as a collector; he is responsible for more than 600 of the total 775 paintings and drawings in the collection. At a time when other British collectors were less interested, he particularly favoured French masters including Watteau, François Boucher, Fragonard, Alexandre Gabriel Decamps and Jean Louis Meissonier, artists who remain poorly represented in other British national collections. He also acquired a body of work by Richard Parkes Bonington, the young and influential British artist who lived and worked in France in the 1820s. The rest of the collection ranges from the fourteenth to the mid-nineteenth century, and includes remarkable paintings of the Dutch and Flemish Golden Age and important Spanish, Italian, and British paintings: Rembrandt, Rubens, Van Dyck, Jacob van Ruisdael, Bartolomé Esteban Murillo, Velázquez, Titian, Canaletto, Francesco Guardi, Gainsborough, Reynolds, and Lawrence, to name but a few. The 4th Marquess often described his own preference for ‘pleasing’ pictures, and in general shied away from distressing subjects. He held a deep respect for artistic quality, excellent condition, and established provenance. 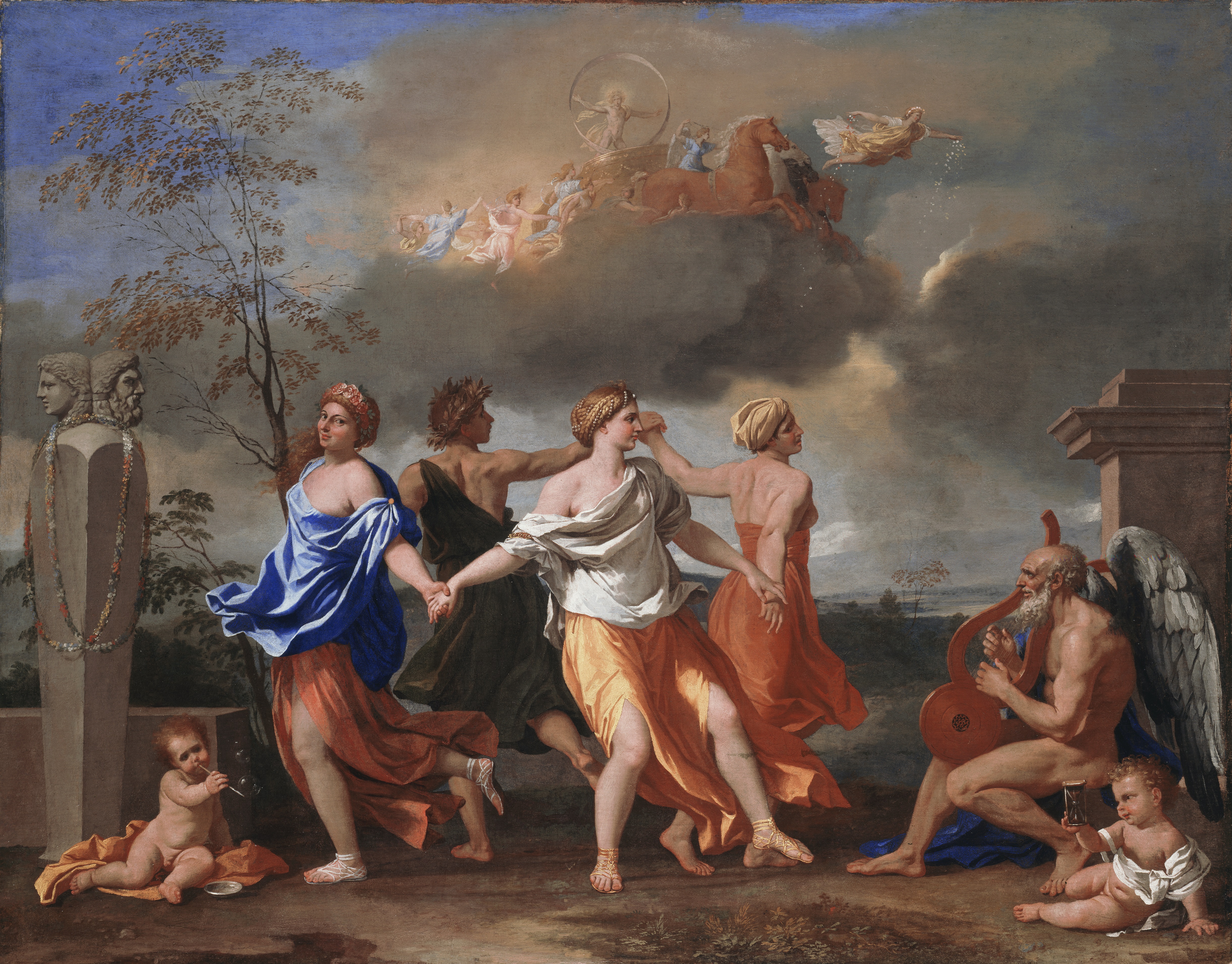 In addition to the paintings there are 334 miniatures in the museum. They may be less celebrated than the paintings but, as with every other element of the Wallace Collection, the miniatures include works of the highest quality, such as those by Jean Petitot, Samuel Cooper, Rosalba Carriera, Peter Adolf Hall, the van Blarenberghes (Louis-Nicolas, Henri Joseph, and Henri-Désiré), Jean-Baptiste Isabey, and Henry Bone. Once again, the collection is marked by its predominantly Anglo-French origins, and it is the French works of the eighteenth and early nineteenth centuries that are most distinctive. 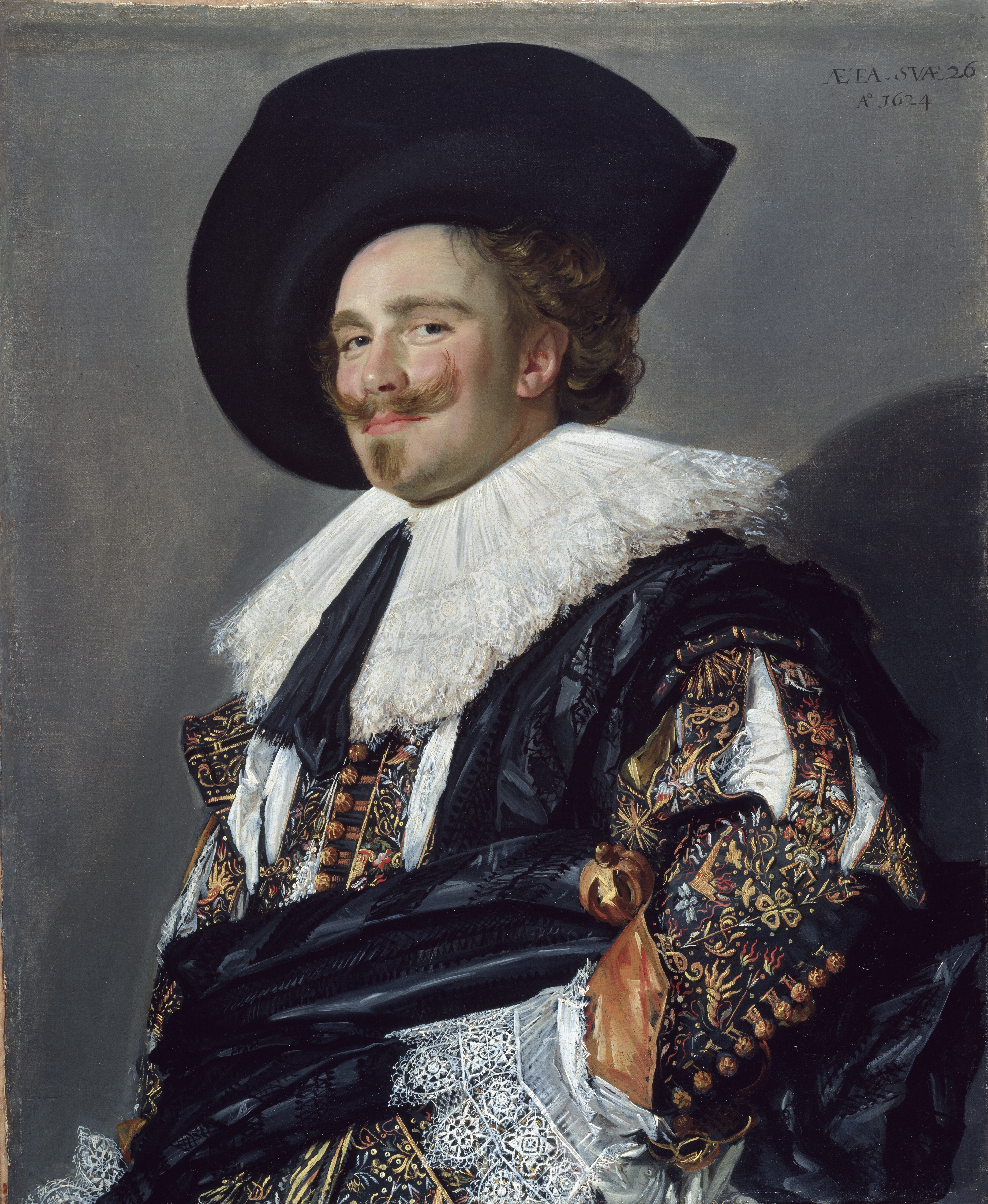 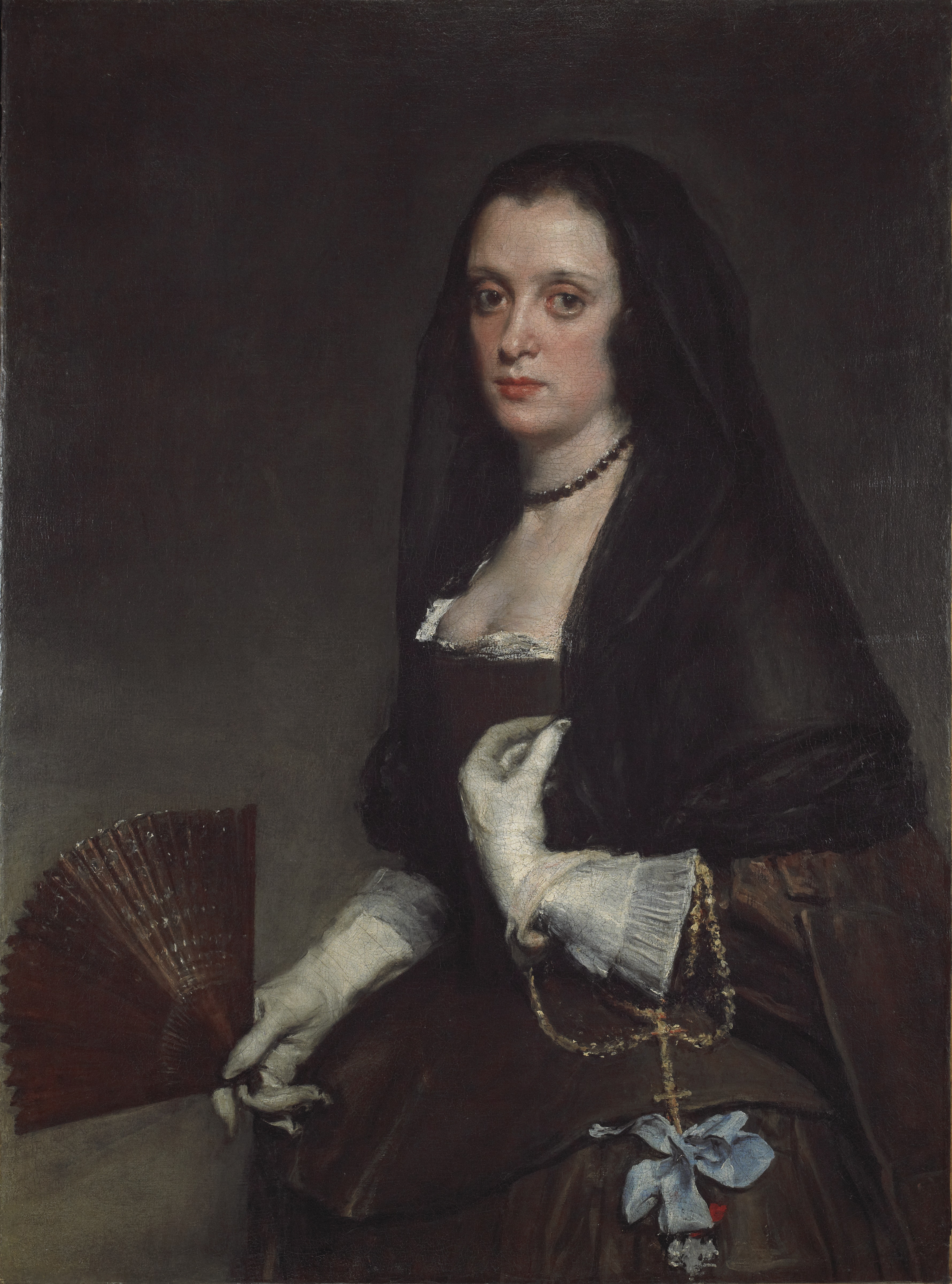 The collection of sculpture is among the most important in the UK, with works dating from between c. 1200 and the end of the nineteenth century, many of international significance. These include the group of French bronzes and the sculptures in bronze by Giambologna and his followers. While the collections may not be comprehensive, they form a remarkable assemblage that includes a number of masterpieces. Of particular note are the marble busts by Jean Antoine Houdon, Madame de Sérilly (1782) and Madame Victoire (1777), two bronze firedogs after Alessandro Algardi from the mid-seventeenth century, Germain Pilon’s Charles IX (c. 1575), Francesco Pomarano’s Hercules (c. 1520), the Head of Christ by Pietro Torrigiani (c. 1516-20), and Barthélemy Prieur’s Acrobat, cast in Paris in c. 1600 and the last work of art to be added to the collection, bought by Wallace in 1888.

Displayed alongside the paintings and sculpture are the collections of French eighteenth-century furniture, porcelain, clocks and gold boxes which are themselves of international importance. 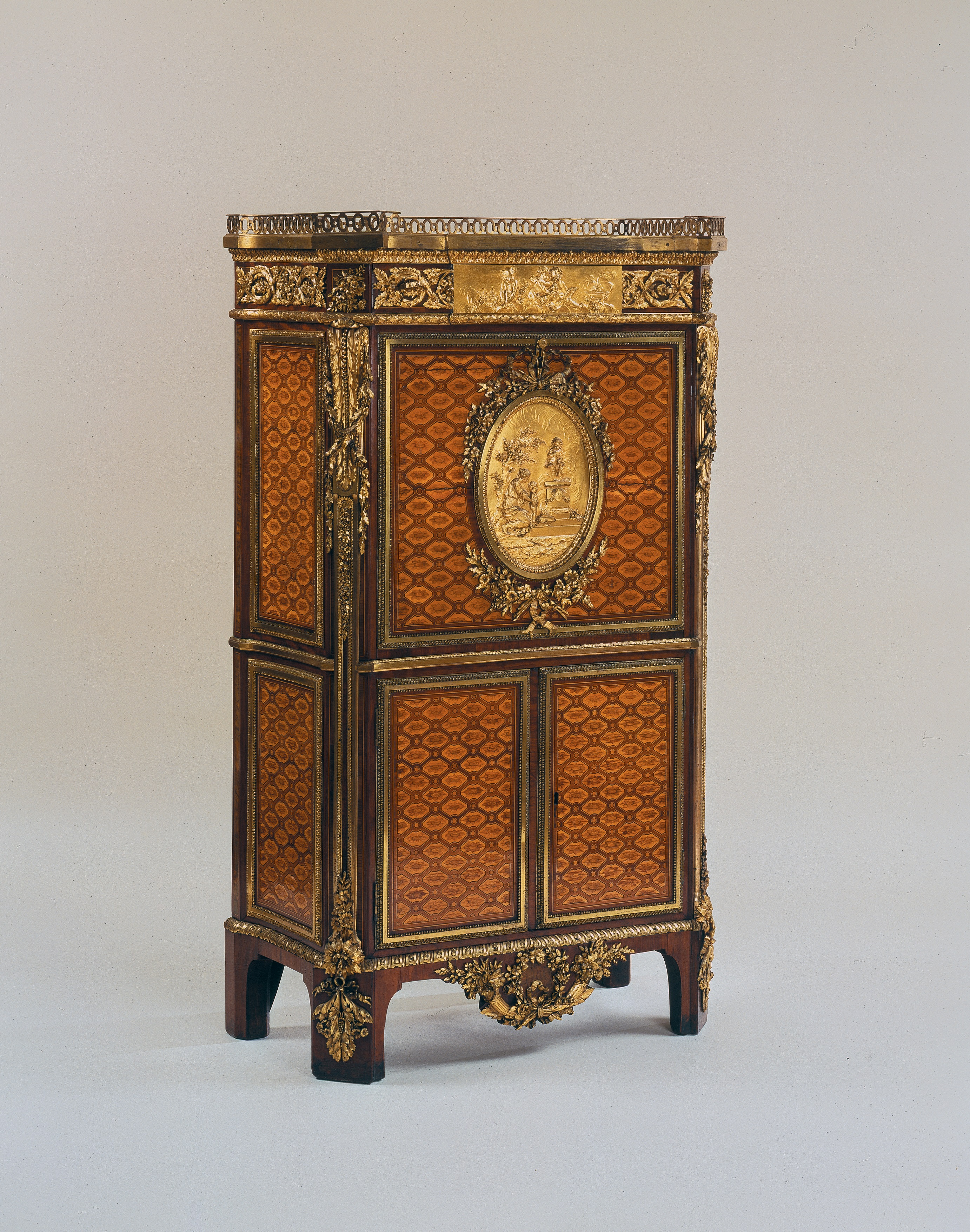 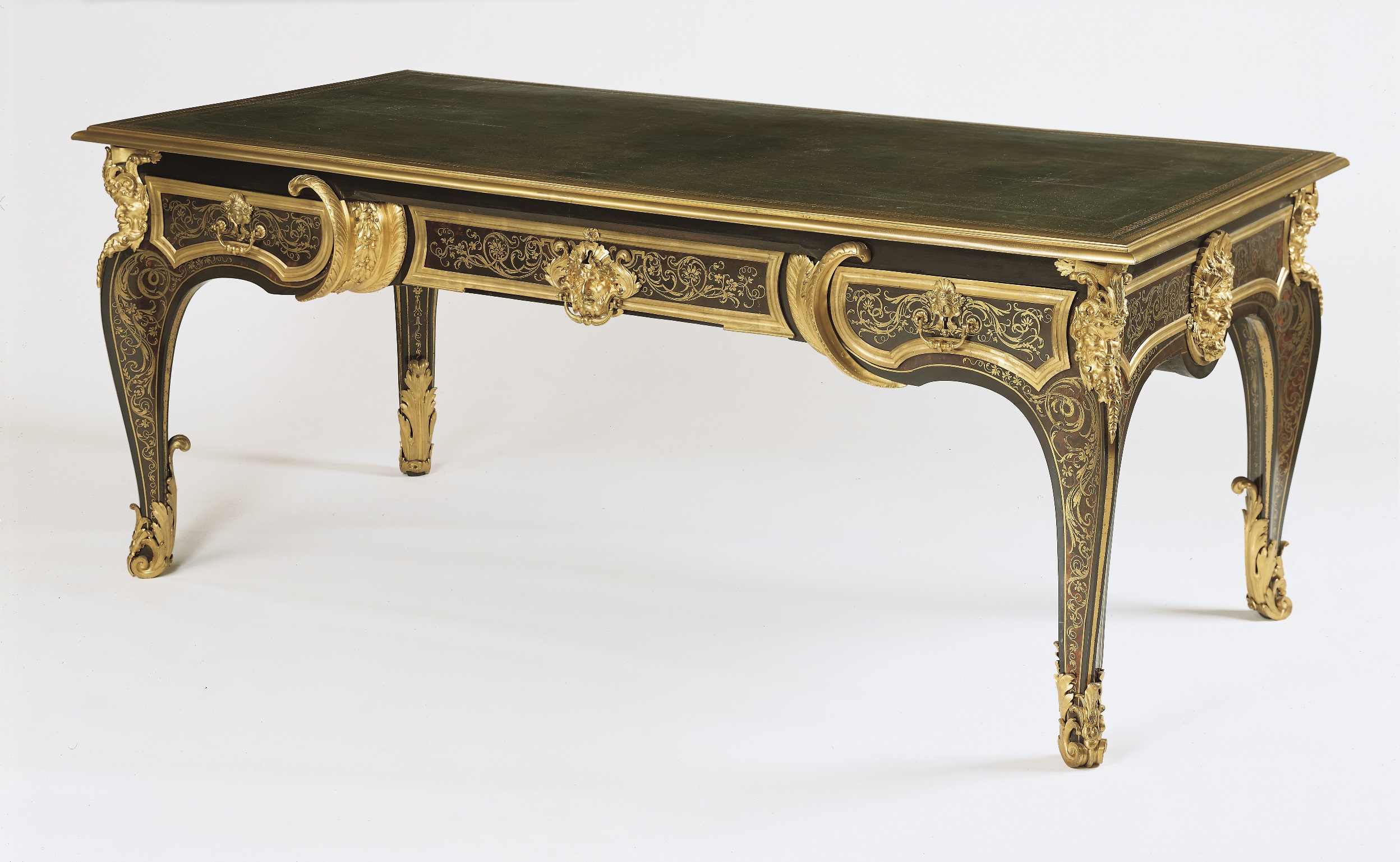 Comprising works by the most celebrated cabinetmakers of the period, including André-Charles Boulle, Jean-François Oeben, Martin Carlin and Jean-Henri Riesener, much of the furniture boasts French royal provenances: five pieces from Marie-Antoinette’s private apartments, a chest-of-drawers from Louis XV’s bedroom at Versailles, chairs from the palace of Fontainebleau, and wall-lights from the Chateau of Saint-Cloud. (Figures 7, 8) The majority of the furniture was acquired by the 4th Marquess of Hertford, and his budget and expertise allowed him to purchase pieces of great quality at a time when the interest in French decorative art of the ancien régime was ballooning. One of his main interests was bronze d’ameublement (clocks, candlesticks, firedogs and other decorative furnishing objects made of gilt bronze), and the collection includes works by the very greatest bronziers of the eighteenth century such as Jacques Caffiéri, Pierre Gouthière, Pierre-Philippe Thomire, and François Rémond. 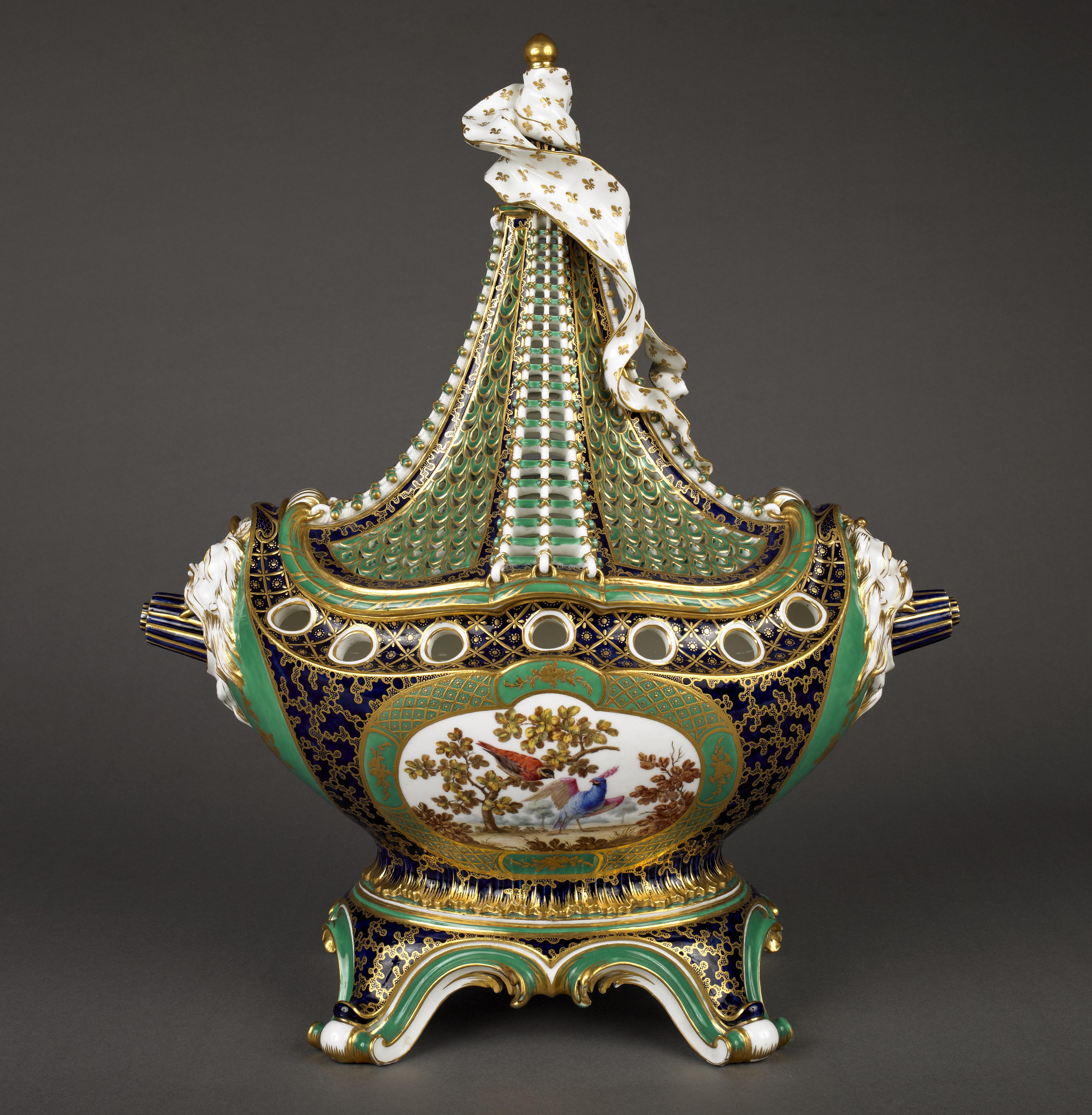 Like many British nineteenth-century connoisseurs, he was attracted to Sèvres porcelain, and the Wallace Collection is home to a stunning collection of beautifully modelled and decorated Sèvres vases and teawares, many of which have royal or aristocratic provenances, augmented by unusual items such as a toilet service, an inkstand, and a perfume burner. (Figure 8) 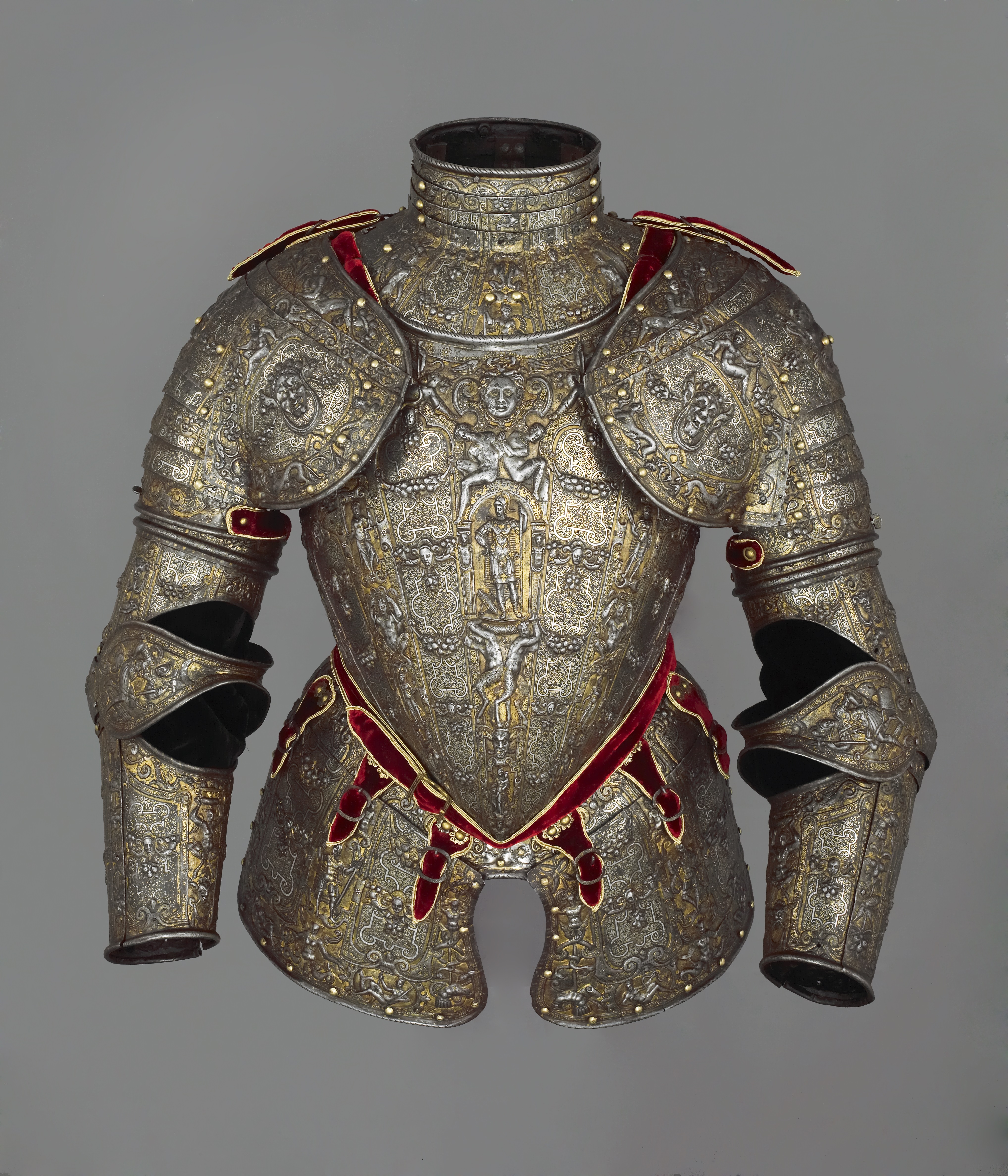 Sir Richard Wallace made a distinctive mark on the collections he had inherited, in particular through his love of the art of the Middle Ages and Renaissance, which was not represented before 1870. Two fortuitous and extraordinary acquisitions transformed his collection, one being much of the great collection of arms and armour assembled by the British antiquarian and connoisseur Sir Samuel Rush Meyrick, and the other being the equally spectacular collection of the Comte de Nieuwerkerke, former Director of Fine Arts under the Emperor Napoleon III. The result was the creation of a collection of arms and armour which, when taken together with the magnificent selection of Ottoman, Middle Eastern, and Asian arms and armour collected by his father, numerically accounts for almost half of all the works of art in the Wallace Collection and, due to the exceptional quality and condition, is justly regarded as one of the most significant in the world. Sir Richard acquired his arms and armour not because of any special interest in war, combat, or technology, but above all as works of art, often of superlative beauty.

This craftsmanship can be seen, for example, in the pieces made in the royal armour workshop at Greenwich for Sir Thomas Sackville, Lord Buckhurst (c. 1587), or the contemporaneous parade armour attributed to Lucio Marliani (1538-1607), called Piccinino, perhaps made for Alfonso II d’Este, Duke of Ferrara. The great armour-making centers in southern Germany such as Augsburg are well represented, including works by Kolman Helmschmid, court armourer to Charles V (1500-1558), German Emperor and King of Spain. The large array of weapons, including sporting guns, rifles, pistols, cross-bows, swords, and rapiers are further testament to the skills and artistry involved in the technologies of war and, as with the decorative art in the collection, often possess royal provenances.