The Romans originated in central Italy, influenced by other local Italian cultures, notably those of Etruria, but from the 5th century they came into contact with the Greeks and from then onwards, the Roman republic absorbed many aspects of first Classical and then Hellenistic art. However it never lost its distinctive character, especially notable in such fields as architecture, portraiture, and historical relief. From about the 1st century BC, the rapid expansion of the Roman Empire brought Graeco-Roman art to many parts of Europe, North Africa and nearer Asia allowing the development of myriad provincial arts, ranging eventually from Northern Britain to the Sahara and from Spain to Arabia.

The architectural legacy of Rome is especially widespread. Beyond the traditional nature of the Roman temple, characterised by its high podium with prominent entrance at one end only, Roman architecture is characterised by its ready adoption of Hellenistic planning and a daring use of new materials, such as brick and especially concrete leading to the stupendous structures such as the great Thermae of Rome and indeed in the provinces, the Pantheon in Rome, and ultimately Justinian’s church of Sancta Sophia in Constantinople.

A key aspect of Roman public art was the commemoration of important individuals, and the later Republic is a period of striking portraits of leading Romans, partly following native veristic traditions of portraiture and partly influenced by Hellenistic interest in physiognomy. Under the Empire, portrait busts of ancestors—as well as of the now all-powerful emperors—graced buildings both public and private. Copies and adaptations of famous Greek sculptures were also numerous in houses, temples, baths, and theatres, and they were designed to provide a frisson of culture to what were brash and sometimes vulgar displays of power and wealth. Under the Empire in particular, reliefs depicting the achievements of the Emperors graced commemorative arches (such as the Arch of Titus) and columns (notably Trajan’s Column), providing a sort of visual counterpart to the literary accounts of historians. These aspects of commemoration can be seen on a miniature scale on the plentiful and beautiful Roman coinage, where many of the best portraits can be seen, as well as a wide range of imagery, both divine and documentary. 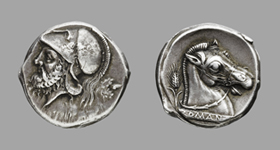 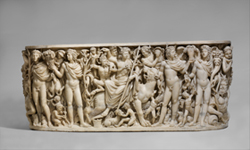 Much of the most distinctive sculpture of the Roman period is found on the peripheries of the Empire where native sculptors worked local limestones and sandstones in what approximated to Metropolitan Roman style. The sculpture produced in the Trier region and elsewhere in Northern Gaul and in the Cotswold region of Britain is lively and uninhibited, characterised by a pleasing fluidity of style which is paralleled by work of a not dissimilar quality produced by sculptors who employed the same soft and malleable stones in the Middle Ages. Similarly rich in texture but more hieratic in form are the funerary and religious sculptures from Palmyra in Syria. Especially distinctive are portraits of women and men clearly wearing native, non-Roman dress. 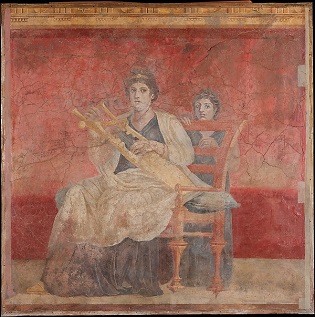 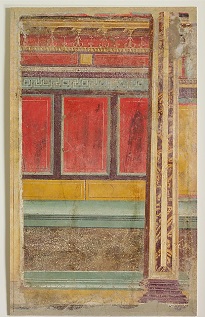 Roman interiors were lavishly painted and stuccoed. For the 1st century BC and 1st century AD, the largest body of evidence comes from the Campanian cities and suburban villas destroyed by the eruption of Mt. Vesuvius in AD 79 (for example, Pompeii and Herculaneum). Four ‘styles’ have been distinguished, the first based on rendering panels of coloured marble in painted imitation, the second opening up the wall to illusionistic mythological or landscape painting, and the later styles adding more decorative and imaginative motifs to emphasise the artifice of the project. In fact the first two styles in particular were taken from the Hellenistic world, as can be shown by comparing Campanian work with paintings from Hellenistic palaces and tombs. Nevertheless, when taken individually, such exquisite works of art as the garden paintings from Livia’s house at Prima Porta outside Rome and the fantasy conceits which ornamented Nero’s Golden House show considerable originality. Moreover, painting continued to develop in the Mediterranean world and in the provinces, where archaeology continues to increase our knowledge of later Roman painting. Paintings from the Roman catacombs (Christian, Jewish and pagan), the Constantinian ceiling paintings from Trier, and the row of Christian praying figures (orantes) from the villa at Lullingstone, Kent in England demonstrate a tendency for figurative paintings to become more formal and anticipatory of Byzantine icons.

Mosaics are often regarded as quintessentially Roman, but they too originated in Greece and especially the Hellenistic world. Many Roman mosaics are geometric in the manner of rugs and carpets, but a vast range of figurative subjects were produced, ranging from mythological and religious scenes to landscape and marine mosaics to scenes of gladiatorial combat and wild beast fights. Different styles and workshops and differences in repertoire are recognisable throughout the Empire. In North Africa for example we find many realistic representations of the Roman arena, while in Greece and Britain such scenes are largely eschewed in favour of mythology. The early 4th century mosaic of the Great Hunt at Piazza Armerina in Sicily is a technically superb mosaic depicting violent conflict between beast and beast and man and man, while the contemporary and equally imposing mosaic at Woodchester, Gloucestershire, England is far more vibrant in terms of design and in the imaginative stylisation of animals which circle peacefully around Orpheus but perhaps lacks the technical finesse of the Sicilian mosaic.

The so-called minor arts were of great importance in the highly acquisitive Roman society. The rich vied with each other in displays of gold jewellery and services of silver plate, which became ever more impressive in the late Roman period. Engraved gems were acquired from the known world, including sapphires and emeralds from India, rock crystal from the Alps, and amber from the Baltic. Hard stones were carved as intaglios to serve as seals or as cameos. Some of these were signed by famous artists such as Dioskourides, who is known to have carved the emperor Augustus’ signet ring. Softer stones such as amber and fluorspar were fashioned into the form of small vessels. 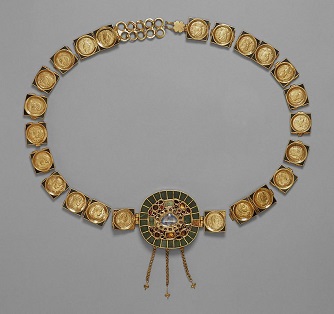 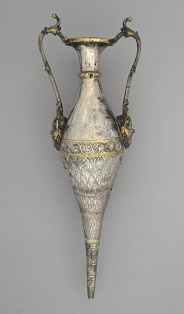 The range of Roman art is vast, and its diversity renders it hard to classify. But its influence on the arts of the Renaissance and the Neo-Classical age and thus of our own time renders it strangely familiar to us in most if not all its aspects.