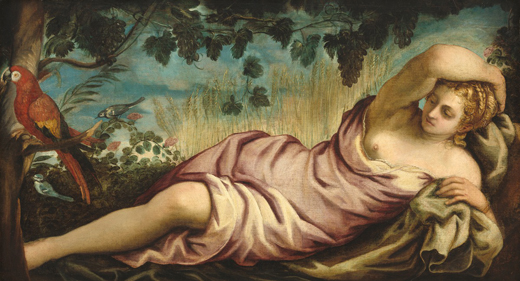 Competition and rivalry are hallmarks of Renaissance history, literature, and art. Renaissance artists strove to achieve the fame and memory of the great artists of antiquity by creating works that would be admired for their religious piety, classical erudition, beauty, and naturalism. Part of this phenomenon were several debates, or paragoni (Italian for “comparisons”) about the visual arts, which played a central role in the formation of artistic theory and practice during the period. In this context, the word paragone most often refers to the debate arguing the merits of painting versus sculpture, but it can also refer to the comparisons of painting and literature and of two rival aesthetic approaches to painting, referred to by the Italian words colore, or sometimes colorito (color), and disegno (design or drawing). During the Renaissance each aesthetic had strong regional associations – disegno with central Italy, especially Florence, and colore with Venice. The disegno/colore paragone therefore also spoke to the period’s civic rivalries and the still-relevant phenomenon of campanilismo, the strong sense of local (as opposed to national) identity among Italians. Although the disegno/colore paragone emerged in the 16th century, its origins can be traced to earlier stylistic preferences and artistic practices among Florentines and Venetians. In turn, these differences have been explained through several historical, cultural, and geographic factors.

Renaissance Venice’s artistic traditions and tastes owed much to its history as a city of the Byzantine Empire. The most prominent monument to this history is San Marco, the grandiose chapel adjoining the palace of Venice’s head of state, the doge. San Marco, which boasted the relics of the Evangelist Mark, was begun c. 1063 and served as the religious center of medieval and Renaissance Venice. The interior walls are covered in glittering gold mosaics, and its exterior is clad in richly colored marble inlay and studded with sculptures taken from the Byzantine capital of Constantinople (now Istanbul) in the 13th century. San Marco embodies the Venetian love of rich color and the effects of reflected or diffused light, which are also present throughout the city, in the watery (and often foggy) environment of its canals. 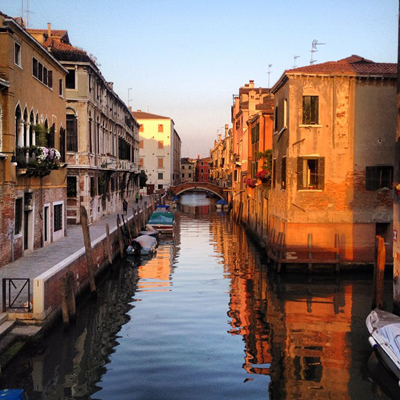 The humid climate of the lagoon city also made fresco painting, common in other parts of Italy, impractical. The plaster deteriorated quickly in the damp air, so when the technique of oil painting became available to them in the late 15th century, Venetian painters readily embraced it. Not only was the new medium more durable, but it allowed painters to fully explore the stylistic possibilities of oils, in particular rich colors and naturalistic effects of light. The medium was also more flexible than fresco and tempera painting, which required careful planning and the production of numerous preparatory drawings. Oil paint dries slowly and can be mixed on the canvas and applied in many layers. As a result, the technique allowed for spontaneous composition of paintings. Some Venetian painters drew very little, and others did so for alternative purposes – to ensure the easy copying of stock poses and figures, as in Giovanni Bellini’s workshop, or to create finished, experimental compositions, as in the albums of Giovanni’s father Jacopo Bellini. 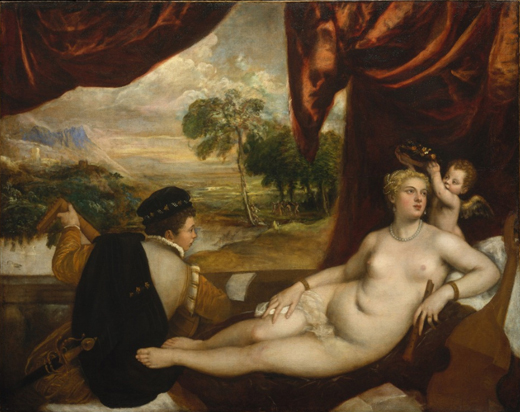 The Bellini family of painters is often credited with making the first Renaissance art in Venice, but the innovations of the painter Giorgione firmly established the hallmarks of the distinctly Venetian style. Giorgione’s career was brief and his output small, but his pupil Titian was to have a long and prolific career, rivaled only by his Florentine counterpart Michelangelo. Titian’s Venus and the Lute Player (above) is typical of his mature style and a stunning example of Venetian colore. Emphasizing the lush, erotic atmosphere, Titian has softened forms through his painterly brushstrokes – especially in the landscape background – and given the interior space a warm glow (note the radiance of Venus’s skin and the sheen of the velvet drapes above). Because of these qualities, as well as its more spontaneous method, Venetian colore was characterized as sensual and natural.

During the Renaissance in Florence, drawing was regarded as the unifying practice of all the arts, embodying the fundamental concept of design (disegno means both “drawing” and “design”). Because of this, Florence had a reputation for producing so-called “universal” artists – those who had mastered painting, sculpture, and architecture, from the 14th-century artist Giotto up to Leonardo da Vinci and Michelangelo in the 16th century. Drawing was a key activity of central Italian artists’ training and practice, and good draftsmanship was regarded as a prerequisite for good painting. By drawing continuously, apprentices learned basic artistic principles (especially the science of anatomy and perspective), and treasured drawings, sometimes collected in pattern books, recorded favorite motifs and poses. Painters produced sketches, studies, and cartoons to aid the execution of finished pictures, especially frescoes. In addition to these practical functions, during the Renaissance period, drawings were increasingly viewed as a manifestation of the artistic process of invenzione – the formulation of the artist’s creative idea. Drawings became valued for showing the inner workings of a great artist’s mind and were collected and preserved by early connoisseurs. Leonardo even exhibited one of his drawings, a cartoon of the Virgin and Child with St Anne, to admiring crowds in Florence in 1501. Some drawings, such as Michelangelo’s sheet of studies for the Lybian Sibyl in the Sistine Chapel, and Leonardo’s studies for a Nativity, show several stages of a process of working out a composition or pose. Because of this deliberate process, and the central importance of the artist’s idea (as opposed to his observation of nature) in the creation of a work, disegno was viewed as an intellectual, rational approach to painting. 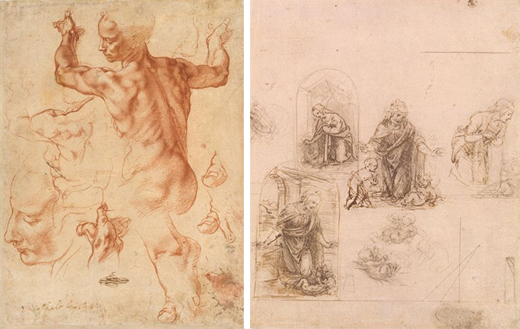 In finished paintings, the guiding principle of disegno is manifested in definition of form and line. Raphael, another of the 16th century’s universal artists, was a master at creating harmonious compositions in which colors, while beautiful, were secondary to clarity of form and flowing lines. In his Pala Colonna (below), this is evident in the crisp, undulating lines of the draperies and the stark shadows cast on the steps of the throne. The icy blues of the landscape background, in contrast with the warmth of that in Titian’s Venus and the Lute Player, reflect the Florentine color palette derived from pigments used in fresco. 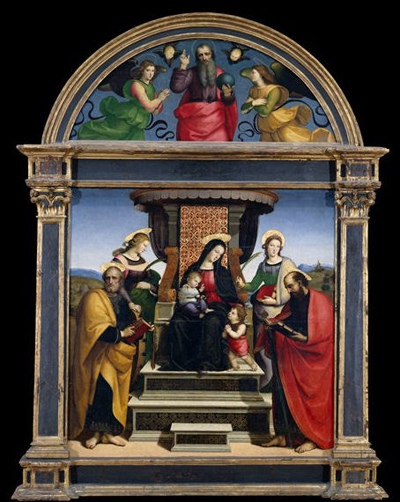 Generally speaking, Renaissance painters throughout Italy wanted to produce naturalistic images and considered painting a liberal art, but Venetian painters strove for naturalism above all, and Florentines focused on painting as an intellectual exercise requiring the artist to manipulate what he observed in the natural world. The stylistic and technical preferences for each group had a theoretical underpinning that was discussed and eventually codified in 16th- and 17th-century writings. On the side of colore were, most notably, the writers Pietro Aretino, his admirer Lodovico Dolce, Paolo Pino, and Marco Boschini. Each of them championed Titian’s colore and criticized Michelangelo’s late, mannered style as represented in his Last Judgment (1536–41) in the Sistine Chapel. Dolce’s L’Aretino (named in honor of Pietro) of 1557 responds to Giorgio Vasari’s Lives of the Artists (1550; second edition 1568), which, in its biographies and discussions of theory in the prefaces, assumes the superiority of Tuscan art, culminating in the careers of Leonardo, Raphael, and Michelangelo. Vasari was followed by such artist-writers as Federico Zuccaro, Giovanni Paolo Lomazzo, and Giovanni Pietro Bellori, who all applied Platonic philosophy to the principle of disegno and particularly admired Raphael. 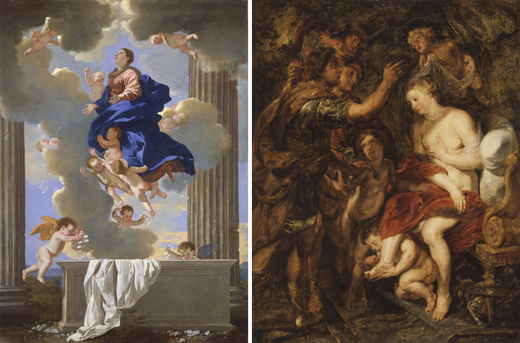 The artists and theorists involved in the paragone had an impact on European painting for many generations. Italian Mannerist painters, like the Florentine Jacopo Pontormo and Venetian Jacopo Tintoretto, exaggerated the styles of artists like Michelangelo and Titian, creating an even greater distinction between the two regional schools of painting. An offshoot of the debate, between classicism and naturalism, continued in Baroque Rome, between the Carracci family of painters, especially Annibale, and Caravaggio. In the 17th century, French painters were classified as Poussinistes – the heirs to the disegno tradition influenced by the stark classicism of Nicolas Poussin – and Rubenistes – the followers of Pieter Paul Rubens, who looked to the Venetian tradition of shimmering, painterly compositions. Through teaching and practice at the artistic academies of Europe, the disegno/colore paragone persisted well into the 19th century.

Heilbrunn Timeline of Art History, Metropolitan Museum of Art, Painting in Oil in the Low Countries and Its Spread to Southern Europe

National Gallery of Art, Giorgione and the High Renaissance in Venice [collection tour]