"Photography appears to be an easy activity," photographer Henri Cartier-Bresson observed. "In fact it is a varied and ambiguous process in which the only common denominator among its practitioners is their instrument." [Henri Cartier-Bresson, "The Mind’s Eye," in The Mind’s Eye: Writing on Photography and Photographers, ed. Michael L. Sand (New York: Aperture, 1976), 15.] Since the medium’s inception in 1839, photographs have been made for myriad purposes and in many disciplines, including anthropology, astronomy, biology, forensics, journalism, travel, pornography, propaganda, psychology, and, last but not least, art. While pursuing these varied disciplines and interests, photographers have also experimented with new techniques afforded by technological advances in photographic equipment and processing.

Focusing on photographs of people, the five lessons that compose this guide invite students to explore topics such as portraiture, identity, and memory. Illuminating the reasons why the two selected photographs were made, the following comparison reveals critical differences in the photographers’ intentions and processes and the reception of the works. 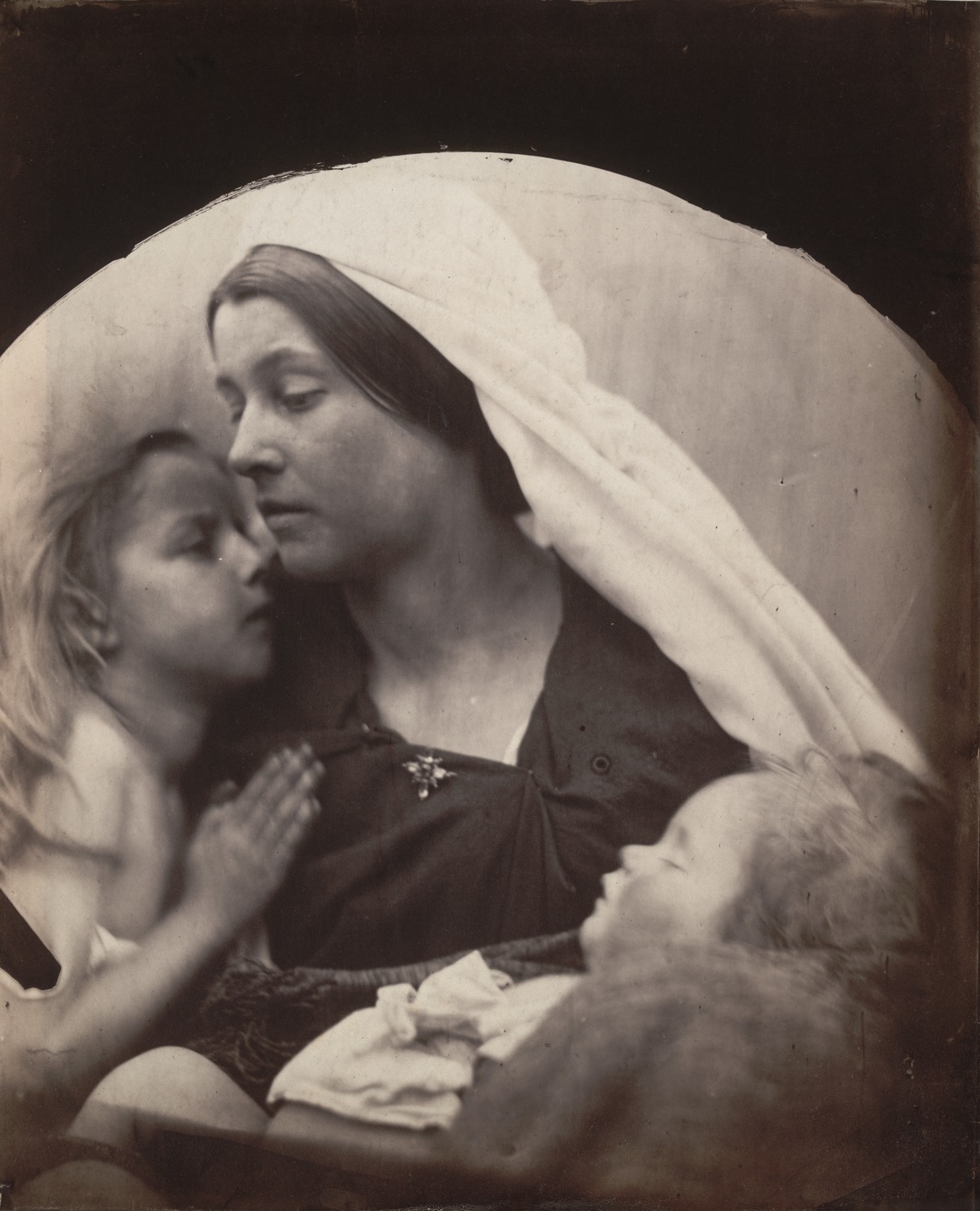 Cameron, a middle-aged mother of a large family, was given a camera in 1864, and she enthusiastically took up photography. Apart from taking portraits of some of the most notable men of the day (many of whom were friends and neighbors), including Charles Darwin, Henry Wadsworth Longfellow, and Alfred Tennyson, Cameron produced photographs such as Madonna with Children, based on artistic, biblical, literary, and romantic themes. Cameron cast friends, family members, and her servants in these allegorical roles, irrespective of their social standing in the rigid Victorian class system. Cameron often draped her subjects in dark cloaks and used anonymous backgrounds, which lent a timeless quality to her portraits.

Experimenting with the wet-collodion process, Cameron embraced the challenges presented by early methods of photography. A plate wet with collodion emulsion (a syrupy solution of nitrocellulose in a mixture of alcohol and ether), is especially vulnerable to streaking, smudges, and spotting from dust. Cameron often allowed such imperfections to emerge, adding a handmade, painterly character to her prints. Cameron also made reference to painting by softening the focus of her lens. "When focusing and coming to something which, to my eye, was very beautiful," she said, "I stopped there instead of screwing the lens to the more definitive focus which all other photographers insist upon." [Julia Margaret Cameron, quoted in Sylvia Wolf, Julia Margaret Cameron’s "Women" (Chicago: The Art Institute of Chicago, 1988), 15.] Ultimately, by pursuing painterly compositions, subjects, and qualities, Cameron hoped to redefine photography. A product of chemical and mechanical means, photography was considered a valuable artistic aid, but not necessarily an art in its own right. This view of photography was especially evident at the 1862 Great Exhibition in London, which Cameron visited, where photographs were exhibited alongside scientific instruments. [Michael Frizot, A New History of Photography (New York: Konemann,1998), 185.] Opposed to this classification, Cameron and her Pictoralist contemporaries believed that, like painting, photography should be granted the status of high art. 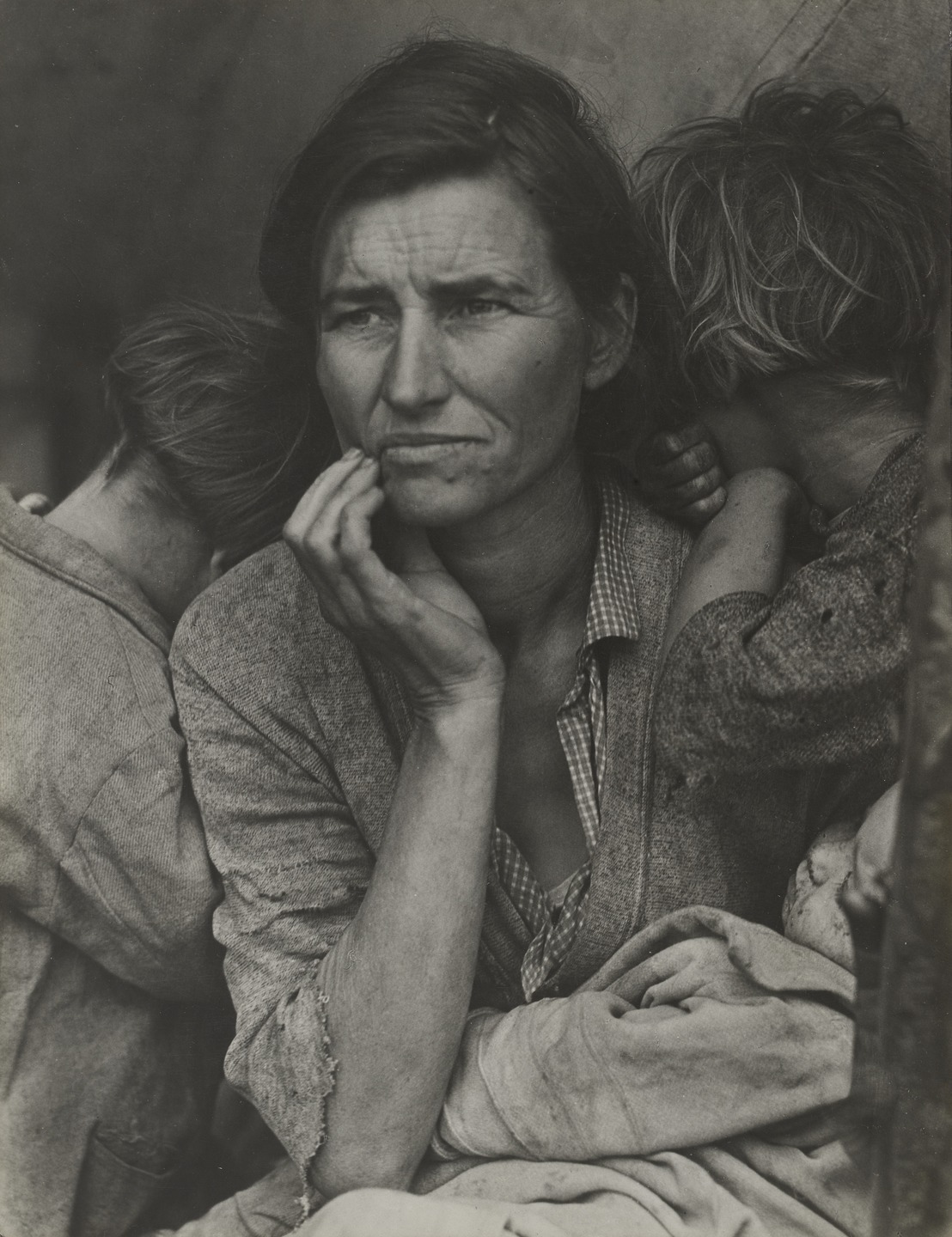 Lange photographed Migrant Mother, Nipomo, California, one of her most iconic photographs, in 1936, while she was employed by the Farm Security Administration (FSA), originally the Resettlement Administration (RA), to document camps of migratory farm laborers escaping dustbowl conditions and battling poverty in California during the Great Depression. Rexford Guy Tugwell, administrator of the RA and later the FSA, noted that their purpose was "not only to bring the resources of government to the assistance of those who were distressed or starved out but to make certain that never again should Americans be exposed to such cruelties…. It seemed important to record the incredible events of those years; and the best way was to photograph them." [Rexford Guy Tugwell, quoted in Dorothea Lange, Dorothea Lange Looks at the American Country Woman (Fort Worth: Amon Carter Museum of Western Art, 1967), 6.] It was a mission Lange closely identified with. Originally a portrait photographer in San Francisco, Lange was moved by the sight of poverty-stricken people standing in breadlines; she photographed them and exhibited the pictures. Lange struggled with the classification of her work as documentary because she felt the term did not reflect the passionate social motivations behind her photographs.

Over twenty-five years later, Lange recalled the experience of taking this photograph:

“I saw and approached the hungry and desperate mother, as if drawn by a magnet. I do not remember how I explained my presence or my camera to her, but I do remember she asked me no questions. I made five exposures, working closer and closer from the same direction.”

Ask your students to bring a photograph of a friend, family member, or even themselves into class. Divide your class into groups of two and ask your students to swap their photographs. Ask each student to come up with a list of at least five questions about their partner’s photograph, then have the partners take turns interviewing one another. As a class, discuss the different types of questions the photographs raised.

FSA Photography: Propaganda or Not?

Commissioned by the federal government, FSA photographs like Migrant Mother, Nipomo, California often present compelling and poignant images of poverty-stricken people and places. Created to help justify and document federal aid, the enormous archive has sometimes been viewed as propagandistic. About this issue Lange stated:

“Everything is propaganda for what you believe in, actually, isn’t it? I don’t see that it could be otherwise. The harder and the more deeply you believe in anything, the more in a sense you’re a propagandist. Conviction, propaganda, faith. I don’t know, I never have been able to come to the conclusion that that’s a bad word.”