Neo-classicism and the French Revolution 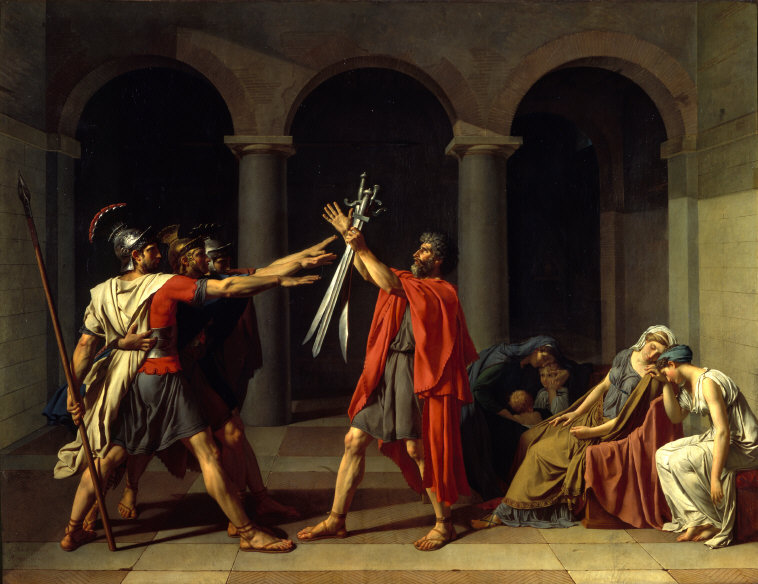 The French Revolution (1789–1799) was flanked by two artistic styles, Rococo and Neo-classicism. Rococo is a decorative style of the early to mid-18th century derived from the French word rocaille meaning shell. Rococo primarily influenced the ornamental arts in Europe, especially in France, southern Germany and Austria, and is marked by asymmetry, naturalism, pastel colors, light-heartedness and delicate shell-like and watery forms. In France the aristocracy built elegant town houses (in French hôtels) that became salons—intimate areas for the exchange of conversations, intellectual gatherings and entertainment. The work of Jean-Antoine Watteau exemplified the French Rococo style in painting with scenes described as fête galantes or elegant outdoor entertainments. François Boucher and Jean-Honoré Fragonard are associated with the spirit of the mature Rococo with their creation of erotic mythological and genre scenes. Other paintings can also be associated with the Rococo age such as the morally instructive genre scenes and still-lifes of Jean-Siméon Chardin.

Leading up to and following the French Revolution, Neo-classicism was the predominant artistic style in France (and in Europe and the USA from about 1750 to 1830). This classical revival of the later 18th century was distinctive for its emphasis on archaeological exactitude, the result of the period's unprecedented level of knowledge of the art and architecture of the ancient world. Factors such as the scientific study of surviving artefacts begun by scholars, the Grand Tour, the systematic excavation of the Roman cities of Herculaneum and Pompeii and the exploration and recording of the monuments of the Greek islands and mainland which were all accompanied by the publication of large-format illustrated books, considerably expanded the repertoire of artistic models available to artists. The heroic phase of Neo-classical painting resulted in Jacques-Louis David’s most pivotal works, Death of Marat and Oath of the Horatii. These works embodied the Enlightenment thought of Diderot, Voltaire, and Rousseau, namely the ideas of basic human rights, modern scientific investigation, rationalism and moral rectitude.