In the years following World War II, the United States enjoyed an unprecedented period of economic and political growth. Many middle class Americans moved to the suburbs, spurred by the availability of inexpensive, mass-produced homes. Elvis Presley led the emergence of rock and roll and television replaced radio as the dominant media outlet.

Many artists and intellectuals had emigrated in the years during and after the war from Europe to the United States, bringing with them their own traditions and ideas. It is in this climate that a group of artists that came to be known as the Abstract Expressionists came of age. These artists, including Jackson Pollock, Willem de Kooning, Barnett Newman, and Mark Rothko, created diverse bodies of work. They explored new ways of painting, reinvigorating and reinventing the medium. They sought to express emotions, individual feelings, and personal experiences in their work. They were considered to signify or embody a distinctly "American" element of space, confidence, and creativity.

Franz Kline, another such artist who worked in New York City in the 1950s, was known for his large paintings with bold lines that exude a sense of movement and energy. 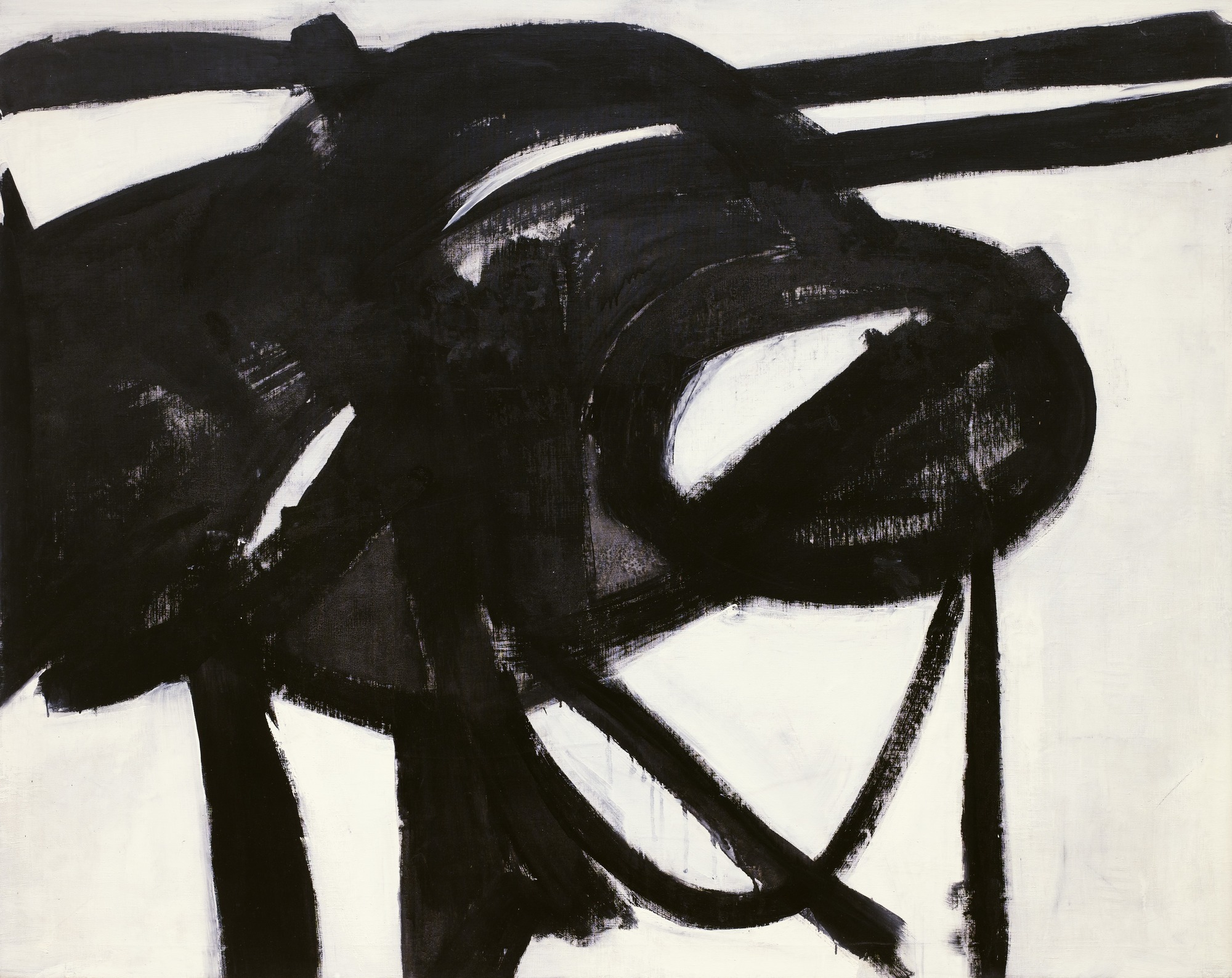 In this painting, Kline used commercial paint and housepainter’s brushes to create thick black lines on a white background. Kline’s painting has been described as looking like tar smeared on slabs of concrete or steel girders twisted around canvas. It is evocative of shapes and structures found in the city, such as bridges, buildings, tunnels, engines, and roads.

It may look like Kline created this painting quickly. Actually, he took a long time to make his work. Before he painted, he often created drawings, which he then projected onto a wall. He got this idea from his friend, the artist Willem de Kooning, whom we will discuss later in this guide. He found that the drawn lines, when magnified, became more forceful and abstract. Thus, many of his painted canvases reproduce a drawing on a much larger scale, combining the improvised and the deliberate, the miniature and the monumental.

Ask students to reflect upon this statement. What do they think it means? Why is the white as important as the black?

The growing political and economic stability in the United States in the 1950s led to experimentation and the rethinking of the social order in the 1960s. This so-called "cultural revolution" promoted antiauthoritarian education, women’s liberation, new career structures, and an increased climate of intellectual and sexual freedom. The Vietnam War incited mass protests and the Civil Rights Movement sought equality for African-Americans.

Artists such as Andy Warhol and Roy Lichtenstein wanted to connect traditions of fine art with the images of popular culture offered through television, advertising, and film. As Warhol stated, "Pop artists did images that anyone walking down the street would recognize in a split second—comics, picnic tables, men’s pants, celebrities, refrigerators, Coke bottles." [Andy Warhol, quoted in Popism (New York: Harper and Row Publishers, 1980), p. 3.] Artists made collages, prints, paintings, sculptures, and drawings. Their subjects were diverse, including representations of celebrities, political events, and consumer products. In contrast to the work done by artists in the 1950s, much of Pop imagery combines the painterly and photographic as well as the handmade and the readymade.

The American artist James Rosenquist was working in this time of turbulence, experimentation, and consumerism. His work responds to popular imagery, advertising, and politics. 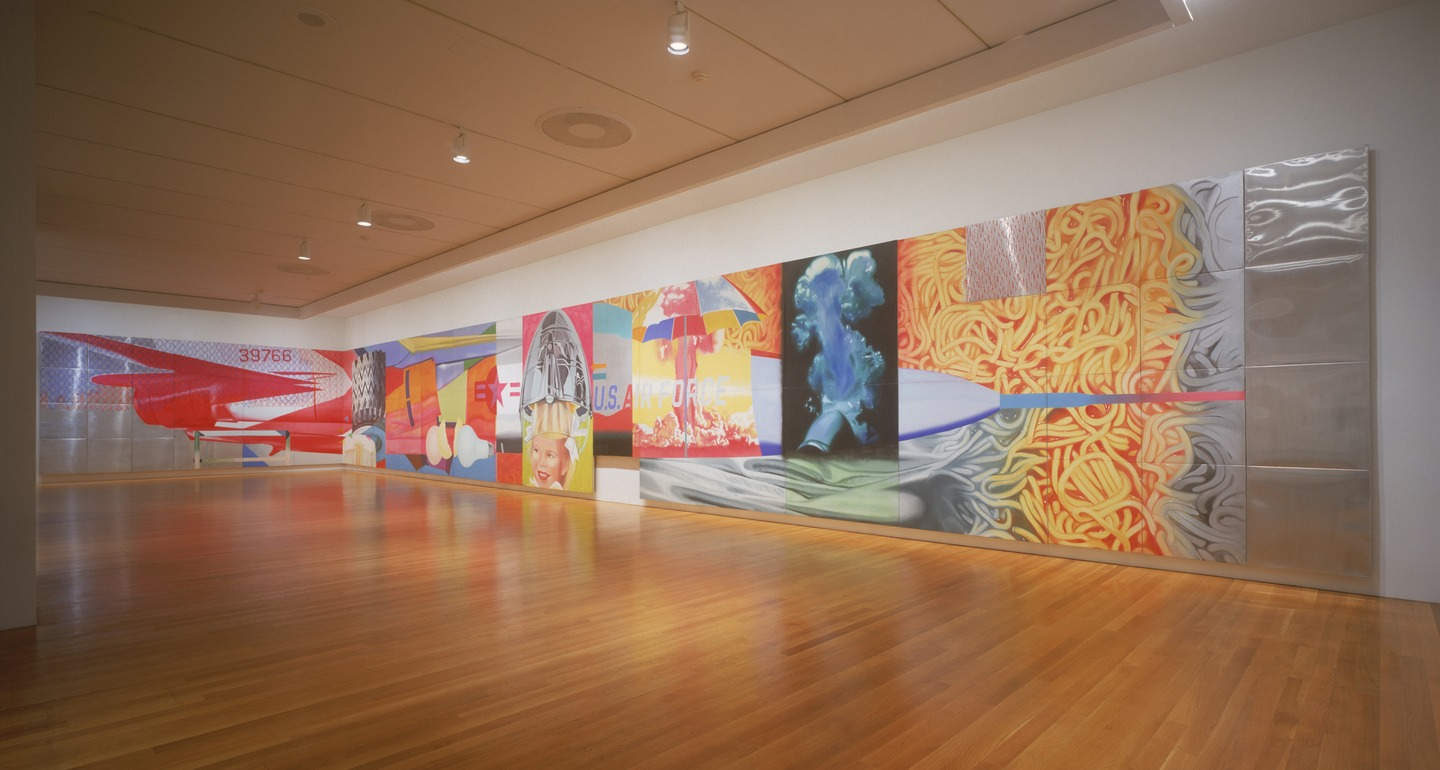 Before he created this painting, Rosenquist worked as a billboard painter in New York City. This work influenced the style, scale, and content of his paintings. He designed F-111 to have twenty-three panels, which wrap around all four walls of a gallery, surrounding the viewer. The entire work measures 10 feet high by 86 feet long.

The years following World War II brought about many changes in American life. The artists included in this guide represent two major trajectories at this time. The first is the idea of freedom, space, and personal expression, as shown by the large, expansive, painterly work of the Abstract Expressionists. The other is a celebration of material culture, commercialism, and the everyday, as represented by Pop artists.

Go to Lesson 1: Revolutions in Painting →