Marie-Claude Beaud is the Director of the Musée d'Art Moderne Grand-Duc Jean (MUDAM), Luxembourg. She headed the completion of the new museum building designed by I. M. Pei (the museum opened July 2006), and navigated the hurdles of integrating the historically important Fort Thüngen with the new structure. Prior to this position, Beaud was Director of the Musée des Arts Décoratifs in Paris, which consisted of several distinct museums,and founded the Fondation Cartier for contemporary art. She talks to Grove Art Online about her experience directing museums and developing collections, as well as the future of art information. [Interview conducted in Chelsea, New York, 10 Feb 2007]

CK: What were the original plans for the new museum building?

MCB: Pei wanted the entrance to go through the old fortress and emerge in the new museum space. It was a very smart design, but this plan had to be abandoned. In the revised plan the entrance did not go through the old fortress but there was still a bridge connecting the two buildings. It was a political game—using a good thing, UNESCO, for personal and political reasons. And in the end, this connection had to be abandoned as well.

CK: Was Pei reluctant to redraw the plan? 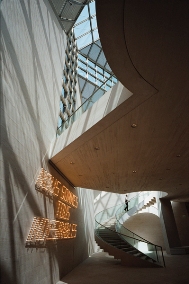 CK: How long did it take to build?

MCB: It began in 1999, but construction was delayed due to lawsuits attached to public offer problems. Normally, a museum of this size should take about three years, but there were four years more of disputes. The museum is situated in a garden designed by French designer Michel Desvignes, and the museum is dedicated to the Grand Duke Jean.

CK: What was your experience in Paris before you moved to MUDAM?

MCB: I was the Director of Musée des Arts Décoratifs, and before that in charge of the American Center in a building just finished by Frank Gehry. After two years we decided to sell thebuilding and shut down the activities on site because we couldn’tfind a way to sustain the Center. It was a tough time; I fired everyone including myself, though I’m still on the board of the American Center Foundation. We are a small group, and we remain dedicated to helping “risky projects”. We help mostly projects in the visual arts and haven’t done much in the performing arts because we don’t have the resources. It’s not just French and American, it’s totally international. For example, we help young curators with travel grants and we’re fostering a new generation of freelance artists and curators. In 1984, I started the Cartier foundation (for contemporary art) outside of Paris and then, with Jean Nouvel as the architect, I supervised the new building in Paris. I think people need to have a shelter, a place where they can not only see art, but also communicate, have kids running around, lovers, babies, and families.

CK: How did you make the decision to move to Luxembourg?

MCB: My predecessor had asked me to come and meet the board. I thought I was not the one they wanted, but I went and they chose me. So that was it. I knew my predecessor, he was a very good director who started a very good collection of contemporary art in Saint-Etienne, France. When I first worked in museums, I started in Grenoble in the 1970s when there were few museums of contemporary art.

CK: Was it an adjustment moving from Paris to run this museum in Luxembourg? Were there significant cultural differences?

MCB: It’s a big difference. Luxembourg is a very small city and country, with about 500,000 inhabitants. It’s like one street in New York. Because I ran major museums in Paris, people asked why I was going to a smaller place. And I said, “Because the project is interesting to me; the situation is interesting to me. It’s a challenge.” Everyone thinks you have to go from the province to the big city. Why? It’s ridiculous. It’s not a formal decision,but I think when people want you it’s easier. I think it’s important to work with new people. Luxembourg was an area where there were always invaders from Belgium, Germany or France. It’s a country that was changed by the discovery of coal and steel and later by a financial system. In comparison to France, it’s a very interesting economy. It’s the story of the world, we are not different.

CK: So running the museum is different from working in Paris or even in a French museum in the provinces.

MCB: Yes, because it’s much more connected to the European community, which is different from Paris. Paris is something outside of everything. But I am not Parisian, so it was not difficult for me to make the transition. In the 1960s, Luxembourg opened the economy, which in the ‘70s and ‘80s attracted a lot of people. Suddenly, a lot of money arrived—it’s the usual way to become nouveau riche. Jacques Santer as Prime Minister, before he became President of the European Community, identified cultural issues and education as key areas for development. As a result, Luxembourg began to renew the theatre, concert hall, rock hall, and national and city museums.

CK: So the new mandate is to focus on cultural programs.

MCB: Yes, Luxembourg was chosen as European capital of culture in 1995. This was very important because Luxembourg’s population is extremely diverse. Now more than 50% of the population are not originally from Luxembourg. There are people from Italy, Portugal, Poland, Romania, Spain, etc. The first wave came with the coal and steel industry, and then with the construction boom. So in terms of culture, there is a lot of energy.

CK: You are also in charge of collection building, how you make decisions in building MUDAM’s collection?

MCB: When I arrived I had a budget of less than a million euros and we started with this. If I want to purchase a Bruce Nauman or Baselitz, it’s too expensive. But if I look for a small piece that captures all the vision of his work, it’s possible. We are not in the commercial art game. We might be able to receive major works through donations from important collectors, but what I wanted was to build a substantial collection based on young international artists. When I arrived, I said to the board, I want a small scientific committee, not an acquisitions committee, but a scientific committee. So I proposed Carmen Giménez from the Guggenheim, Nick Serota from the Tate (who is now replaced by Alfred Pacquement from the Centre Pompidou), Stephan Schmidt-Wulffen, the Rector of the Fine Arts Academy of Vienna, and Paul Reiles, former director of the National Museum in Luxembourg.I chose art experts who also happen to be friends. We discuss the works; we don’t discuss the market or competition. I could bewrong, but with my budget, I don’t think I can make big mistakes. I’m sure I make mistakes, but in the end, museums are full of unknowns, the Louvre, the Metropolitan too. It’s quite easy becausewe are not so rich; we only have 800,000 euros a year, so a lot of commercial galleries are not interested in us.

CK: So you have to make very judicious decisions.

MCB: For example, I just went to a small gallery, and I saw an interesting video. I got all the information and it’s totally affordable. I will see my curators and we’ll discuss the opportunity because we have to be focused. With a small team, we really focus, naturally. Often, we have purchased things that are now very expensive. It’s not a big deal, but it’s nice for our egos.

CK: MUDAM also collects works by artists who are very young. With emerging artists who don’t have a long exhibition history, how do you make those decisions and take those risks?

MCB: Everyone on my team travels, and also looks on the internet. Our team speaks fifteen languages; each person speaks three or four languages: English, French, Luxembourgish, German, Italian, Slovakian, etc. Also, the diaspora of Luxembourgish artists is interesting because Luxembourg is very tiny. They need to work abroad. Nothing is anonymous here. For artists, it’s much worse, not just for their private life, but for their intellectual life. In the next two months we will change the architecture of the galleries to include one dedicated to collectors, and one for discovering young artists on a regular basis.

CK: You mentioned that your curators look on the internet, and that the museum has an e-gallery. How important is online information for artists now?

MCB: For me, the internet changed the problem of geography, which has nothing to do with territories. For us, we are quite an example because we are small. We don’t have Brazil’s weather, India’s size, or China’s philosophy. I think we have to be local; but we have to give the local the international point of view.

CK: Some people say the book is obsolete now, but I don’tt hink it is. Do you think online information is going to cause the death of the book?

MCB: No, it’s two layers. It’s like when people said painting is dead because of photography. Media and technology are just tools. I think art is like any other production, just like Marx said. Some art is very inventive, some useful, some boring; the internet is just a tool. Adaweb (see http://www.adaweb.com/project/), started in 1995 by Benjamin Weil in New York, was a website for artists and for art production. It was the first one to do so and it reached a lot of people and worked with many new ideas. Also,our site www.mudam.lu is maybe the best thing for us. The designer Claude Closky is a very strong artist.

CK: So what is the value of the printed book today?

MCB: A friend of mine, an art historian from Ljubljana,said that libraries in his country are disappearing; he is forced to go to Paris to consult books in libraries for his job. In the library, in the context of materiality, it’s very different. In fact, the spirit of the library is very interesting. You can get quick information online, like the New York Times online, but the library offers a totally different experience. In our museum, I am trying to make a space for artists to create. For our museum catalogue, we chose a very traditional graphic designer in Berlin who doesn’t use computers and draws everything by hand. But he also invited a new media graphic designer to create a special font for MUDAM. Now every exhibition has three parts: the exhibition, the website, and the catalogue.