CK: How did you become interested in working in the areas of collaborative and public art projects?

KS: I was fortunate to become a member, though a slight late-comer, to Collaborative Projects Inc., which was an organization of artists, self-organized artists, in the late 70s and early 80s, where we made various situations and group exhibitions—TV shows or radio shows or we would rent spaces or break into spaces and then leave. I suppose that was when I first worked with other artists. In a certain sense we all did our own work but we did it together. I always liked that model, like the quilting bee, where you get to work collaboratively or in proximity to other people. I also worked a great deal in printshops and foundries, which is a real collaborative effort. I end up with the glory or disaster of it but I am really working with many other people. A lot of the work I choose to do is very process oriented.

CK: You work with printmaking and paper, media that many other artists do not work with. What do those media and processes offer that other media do not allow? 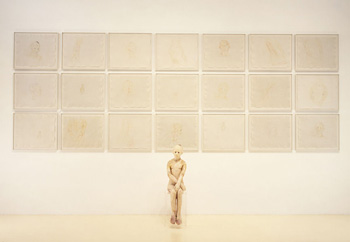 KS: Two things: one, my father the sculptor, Tony Smith, made his models out of paper. My upbringing made me attracted to it and also gave me a familiarity with it. Also, European culture doesn't have a big history with paper as a sculptural medium the way Asia does, so for me it felt like a very free space where you weren't bogged down by the histories. It was a space that wasn't of much high regard, so it also had a freedom in it.

KS: Oh, I still think it's a barrier, but one can still have a playful attitude towards it and try to some extent to disempower and disassemble it. Maybe in one or two generations it won't exist. Those things that are barriers can give you energy as much as they can thwart your ambitions.

CK: The female body is another one of the prominent themes in your work. Why is the body important to your work?

CK: As you know, Grove Art Online is undertaking an effort to expand our coverage of women artists. As we work together to increase the recognition of women, who were some of the artists that influenced you as you were developing?

KS: Frida Kahlo, Lee Bontecou, Eva Hesse, you know, they're probably the main ones, Nancy Spero, Marisol. People that are a generation or two ahead of me. Sonia Delaunay.

CK: In some ways those artists are quite different from each other, say Delaunay and Bontecou for example.

KS: You could also say there were similarities. A lot of these artists were very decoratively oriented. Bontecou worked with natural forms; she was nature-oriented, dealing with animals and plants. Certainly Frida Kahlo too.

KS: I'm 52 and I grew up in the 60s. In a very overt way, India was very present in the cultural imaging of the 60s. Then later China, Japan, Korea and Vietnam. At different times I paid more attention to one over another. It moves around what influences you. Certainly today Asian art is a dominant influence.

KS: Both. Buddhism is influential in people's thinking about art and images. You can look in the big cultures and see it moving around and changing. I'm particularly interested in Guanyin. Representation changes over different time periods or cultures so I look at Egyptian things, Japanese fashion, etc.

CK: Your work is in major museum collections such as the MOMA and the Metropolitan Museum of Art, do you think women are finally receiving the kind of recognition they deserve?

KS: It's very optimistic for younger generations, things have changed radically in the last 50 years and will continue to change. The whole culture's changed; people who have been excluded fight for inclusion and then they are included. Sometimes we can act smug that things are fab here, but you can go somewhere else and there are no women teachers or professors or artists represented culturally, and that can be frustrating. That will all change with the amount of population movement.

CK: One of the essays we have recently added is on feminist artistic collaboration and it's just remarkable how women have impacted the development of post-modern and contemporary art. 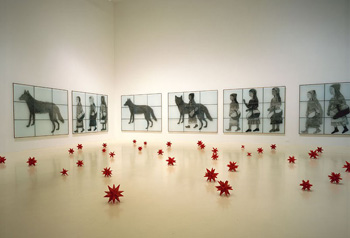 KS: Yes, women very actively changed the paradigm. Often they worked to innovate and make new forms, like Joan Jonas, or like Martha Rosler worked with cultural materials to make new readings. Many women worked with photography, because painting was privileged, and women made tremendous changes in film-making in the 70s and 80s. One can be marginalized, but one can also be incredibly empowered by being out of the centre. Maybe when one gets into the centre you are slightly neutralized and you're just another thing to be knocked off. So there are moments of being in secret that can give you tremendous advantages as an artist.