WC: Why is process so important in your work, and how is it manifested in your sculpture?

JW: Do you mean how have I looked at my early pieces that people associate with 'the process'? Because that meant something very different in 1970 than what it seems to mean at this moment.

WC: Maybe we could go back to what it meant to you when you started working that way.

JW: When I was first making sculpture, I just dove in and made full-scale sculpture right off the bat with no transition from being a painter. As a painter I was very interested in drawing, so when I was working on sculptural shapes I was thinking of them as drawings, you know: a line goes around and around and around and around. Part of how I thought of these early pieces is you just make the form full and fatter and fatter and fatter until you've built a shape, much like we build a house: more bricks, more bricks, more bricks. What I have in mind is not necessarily my first pieces. I'm thinking rather of the pieces at the Modern and the Whitney. I wanted them to equal the presence of, in those cases, logs, and what I felt about those logs, so the piece at the Whitney, 'Bound Logs,' is hardwood and it has a very pressed-out feeling. The one at the Modern, 'Bound Square,' is sort of skinny (even thought they may have the same measurements) and doesn’t push out so much. I wanted the Whitney one to be more muscular, so I was building it up like a body builder, up to that kind of shape. I aimed to both visually and physically build up the sense of energy. I wanted the energy in it to equate with the presence of the wood. I was looking for equals, really.

WC: You were looking for that point where it was finished because it was in equilibrium?

WC: What of your childhood in Newfoundland and New Brunswick has had an impact on the way you work and create?

JW: I had a childhood in the country near the ocean, pretty much on the ocean. But there weren't beaches. There were rugged cliffs and the force of the ocean. The tide came in and the fog came in with it and they were large and dramatic and very visceral. The rocks were covered with seaweed, and it was very slimy and slippery and you could fall in and drown. It had a huge scale. You got to look across the ocean but you didn’t really get to go in very much. It was freezing cold. The sea dogs swam off sea dog rock, and you could swim a little in the summer. It had a very substantive quality. This quality was very present in how it felt, how it looked, how it was. The seaweed wasn't like slippery, shiny satin. It was the Revenge of the Seaweed! If it was slippery, you slipped in. You knew what slippery meant in nature. It was very integrated in the experience of all these natural elements. I suppose I'm very interested not in new, different, decorative material, but in the substance of what you work with, and working with that. Very often what I’ve done is worked it to its bitter edge. I burned one of the early cube pieces and exploded another one. In those pieces there's a parallel to nature in Newfoundland. There was a very distinct boundary between you and falling in the ocean, and that also meant dying. I was dealing with something that I knew. A cube is known, it's knowable, it's a measurement, basically. I wanted to bring the materials that I'd gotten to know together with the unknown. What I used as unknown was the fire or the force of explosives, which I didn't know anything about. It was my own personal unknown. I wanted to make those qualities go into the material so they imbibed it. So we had an event—the explosion, the burning—and there was a lot of unknown in that. The events had consequences, as nature has its consequences. As a child in that kind of nature, you're always dealing with consequences. 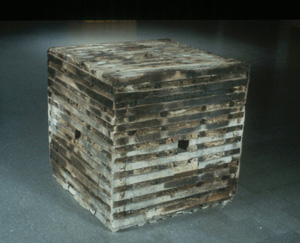 WC: How do you see your relationship to the minimalism of Judd, Andre and Richard Serra?

JW: Richard is my peer, the others are slightly ahead of me. First off, they weren't the first abstractionists. I grew up with my dad building houses. My dad had aspirations to architecture and was an engineer, so the cube shape was very familiar. In Newfoundland, where I'm from, there were underground cellars, there were root cellars, so those were very familiar. By the time I was thirteen we had lived in thirteen houses, and my father had built one house completely, completely rebuilt a second and helped my uncle build another. All Newfies of the male gender were carpenters, it's just part of their trade, so construction was familiar. In my childhood I was as familiar with a plumb and square as I was with oatmeal.

During the time I was a painter, it was assumed that you painted on rectangles or squares. You bought materials at the art supply stop, and you assembled your stretchers into a canvas and you gessoed it and there it was. There wasn't a lot of thought, at least in my early training, beyond that. So I thought about it. I was interested in rope because it is both a fat line and many lines. Those first pieces that I made sculpturally came out of rope and drawing. Then I worked with the frame and later I got to making the cube. The format of cube came from a dream, on a certain level. The other part came from painting, because the three-dimensional version of a square is a cube. Making that leap from one paradigm to another—3D—seemed straightforward but also mysterious. It also managed to line itself up fairly well with this dream I had. I had dreamt of being in my studio and seeing a little spot of light on the wall and being very curious about it because it didn't seem to be coming from the sun outside, and digging until I made a hole through the wall into the next space. So when I built the first cube piece, which was a sheet rock piece, it was really making that possible in a sculptural form. Of course it had six sides, and the sides were of many layers of sheet rock, making the walls very thick. This thickness was visible through small windows, one on each side, into its center—it was about eight inches deep with a twelve or fifteen inch open space on the inside.

I thought that nobody in painting seemed to think much about structure. Now of course, that isn't thoroughly true, it's what I thought at the time. As I mentioned, I was thinking of sculpture a little bit like painting and drawing. It's just that it became thicker. I was very interested in bringing together things that people don't think about. People don’t think about the space around something, and I was interested in claiming some of that space. The pieces at the Whitney and the Modern were very much about that inside space, that open framed center, which you stand in front of. You look left and right at the sculpture, but you're looking straight ahead at the void. It was containing the void and claiming it inside the piece. My interest was where I find the divide. I went to India about 10 years ago and visited temple caves excavated into hills. The solidity of the walls had remarkable presence and they were completely solid, for the walls were the hills. Furthermore, your voice resonated all over the place. Something about the solidity and resonance was in the ballpark of my interest, except rather than resonance in my work it was this wispy little bit of light, open space, opposite of the density of the walls. I came to see the time I put in it as my energy transferring, and when it became embodied it created its own presence. The piece was about energy; it wasn't about a single gesture—the stroke. It was about hanging out and being there and building up on itself. Stewing, sort of.

WC: Do you feel that women are gaining equal recognition for their contribution in visual arts today?

JW: There's a certain amount of visibility, and that visibility is great. If you look at politics, clearly Hillary Clinton has quite a lot of substance as a character, whatever you think of her politics she has a lot of substance. She's simply going to have to be three people. To move mountains. Breaking through established barriers requires that will. That's how it was for women artists in the late 60s and early 70s. More women artists are visible these days but there isn't equality.

WC: The answer is sort of yes and no.

WC: Right, leaving a lot of work behind.

JW: That's where we're at now. At some point, maybe it won't be that way. I think there've been a lot of improvements and there's a long ways to go.

WC: What do you see as the primary sources of inspiration for you in history and in art? Where do you look?

JW: When I was a very young artist, I loved—I never saw them in person then but I loved—the Winged Victory of Samothrace and I loved the Venus of Willendorf. I have actually seen them since then, and I still feel equally connected. In my very first show, I used a photograph of the Winged Victory of Samothrace as my show announcement, expressing the rapport I felt. But the work didn't resemble these embodiments of the female form. It's more like kindred spirits.

When I travel I keep a special inner eye for that, for what resonates with me deeply. I've been intrigued by the pyramids. I really like the silence of them. I've visited the pyramids in South America, the temple caves in India, and seen the huge buddhas in China. At one location next to the large buddha was a very small room with about one thousand buddhas covering every inch of available wall space. You enter this little square room and become completely surrounded by buddhas. You are in Buddha's belly, really. It was deeply moving. I was very interested in China in third grade. I really wanted to go and see the underground houses (I suppose that might have been because of the underground cellars I grew up with) but when I did finally go I didn't get to visit them. I could see them, however, from the train en route to Peking and I loved them. They have a solidity about them, a grounding, which interested me. I think there's an interest among sculptors in being real. Let me tell you a story that might illustrate that a little bit. One fine sunny day with clouds drifting by, so the Indian story goes, a saint sat out under a tree, meditating. Something disturbed his meditation, possibly a cloud, wind or a falling twig, and for this great offense a curse was put on clouds that some would have to leave the sky and walk the earth and so the spirit of cloud became embodied on earth as elephants. I just loved the idea that clouds came to earth and are elephants.