What is Eastern Europe?

The understanding of Eastern Europe as a distinct geographic and cultural region is, to a significant extent, a product of recent history. It can be traced to the division of Europe into the Western and Soviet spheres of influence in the wake of the allied victory over Germany in the Second World War. “Eastern Europe” generally designates those areas that fell within the so-called Eastern Bloc during the period from 1945 to 1989. The Eastern Bloc included communist states closely allied with the Soviet Union, such as East Germany (GDR), Czechoslovakia, Hungary, Poland, Romania, and Bulgaria, as well as countries that eventually broke away from the USSR but maintained communist governments, such as Yugoslavia and Albania. 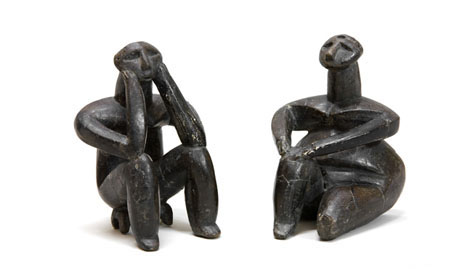 The current understanding of Eastern Europe takes into account events that occurred after the dissolution of the Eastern Bloc. In 1990, East Germany merged with the Federal Republic of Germany. The reunified German state is not considered to be part of Eastern Europe, even though the GDR was a key member of the Eastern Bloc. In 1993, Czechoslovakia peacefully split into the Czech Republic and Slovakia. In the 1990s, the Yugoslav Wars led to the disintegration of Yugoslavia and the formation of the new states of Serbia, Croatia, Slovenia, Macedonia, Montenegro, and Bosnia and Herzegovina. The dissolution of the Soviet Union in 1991 also created a number of new sovereign countries. Those whose borders fall mostly within Europe – the former Baltic republics of Estonia, Latvia, Lithuania, Belarus, Ukraine, as well as Russia itself – are generally included in Eastern Europe.

The notion of Eastern European art can be problematic when applied to works produced before World War II, since the idea of Eastern Europe is based more on the political construct of the Eastern Bloc than the actual geographic location of the countries in question. While some nations certainly fall within the eastern portion of the European continent (the Baltic states and Russia), others belong to central Europe (Poland, the former East Germany, Czech Republic, Slovakia, and Hungary), and the remaining countries (Romania, Bulgaria, Albania, and the post-Yugoslav states) fall within southern Europe and the Balkans.

This geographic spread is responsible for the diversity of cultural traditions and influences apparent in the region. This is particularly true of the pre-modern and the early modern periods, when geographic proximity often determined the direction of influences and the dissemination of particular decorative motifs, architectural styles, techniques, or iconographic traditions. While the areas belonging to central Europe developed close ties with western and northern European cultural centers, those in the southern and eastern areas, traditionally associated with Orthodox Christianity, often looked to the Middle East and the Mediterranean. 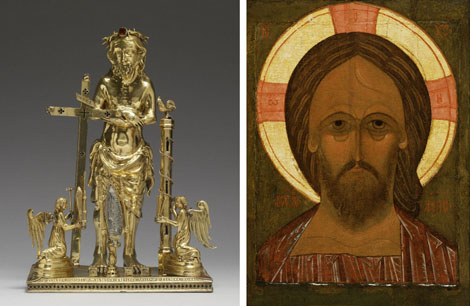 The 16th century to the early 20th century

The dominion of the Hapsburgs over much of central eastern Europe from the 16th century though the end of the First World War also had a profound impact on the development of art in the region. The Hapsburg Monarchy’s patronage and (later) the state policies of the Austro-Hungarian Empire encouraged contacts among artists within the state and promoted both the spread of international trends and the development of distinct national artistic traditions. This was particularly true in the decades framing the end of the 19th and the beginning of the 20th centuries when central European artists began forming exhibition societies and groups dedicated to promotion of modern art (examples include the Mánes Union of Artists and the Group of Plastic Artists). 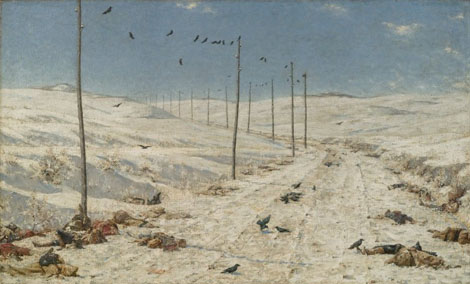 Vasily Vereshchagin, The Road of the War Prisoners, 1878–9, Brooklyn Museum

From the early 19th century through the inter-war years, artists from Eastern Europe frequently traveled to the major European art centers, establishing vibrant art colonies in Rome, Munich, Paris, Berlin, and Zurich (examples include František Kupka and Marc Chagall). They were part of the international modernist avant-garde that emerged in Europe in the early 20th century and many became key members of the School of Paris that formed in the inter-war period.

The shared experience of over four decades of communist rule in the mid-20th century profoundly shaped the cultural landscape of this region, affecting and, in many instances, delaying development of art institutions, discourses, practice, and local markets. Although policies on arts and culture differed depending on the regime (with some highly restrictive and others quite permissive) and the Iron Curtain may not have been as tight a barrier as once believed, it did impede the circulation of information, artworks, artists, and art audiences, not only between Western and Eastern Europe, but also within the region.

As a result, although the development of art in Eastern Europe during the post-war period followed the general trajectory of that in the West, it acquired its own unique character in response to local political, economic, and cultural conditions. Two factors played an especially important role in shaping post-war art in the region. One was the promotion of Socialist Realism as the official state cultural doctrine in the majority of the Eastern European countries during the 1950s and 1960s (for early prototypes, see the work of Aleksandr Gerasimov). The other was an official distrust or even censorship and persecution of independent contemporary art produced and exhibited outside the official channels.

In some ways, the current situation of art and artists from Eastern Europe echoes that of the earlier inter-war period. After the fall of communism and the disintegration of the Eastern Bloc, Eastern European artists began to emerge onto the international art scene. During the 1990s, a period of painful transitions from centrally planned economies to the market system, many artists began to explore the trauma and the legacy of communism, producing works that dealt with various aspects of the postsocialist condition (examples include Il’ya Kabakov’s The Man Who Flew into Space, 1981–8, or Marina Abramovic’s Balkan Baroque, 1997). Today, artists from these regions are fully integrated into the broader European art scene. Many live permanently or semi-permanently abroad while maintaining ties to their home countries, and their works are exhibited and collected by major museums worldwide.