Almost since the birth of the medium, prints have been used to disseminate political and social commentary. In the 16th century, the Protestant Reformation triggered the development of print-based anti-Papal or anti-clerical visual satire by such artists as Hans Holbein the Younger and Lucas Cranach the Elder. Prints disseminating political satire have a long tradition in Britain, dating back to the political and social shifts of the Enlightenment. At the end of the 18th century and the first two decades of the 19th century, James Gillray (1756/7–1815), Thomas Rowlandson (1756–1827), and George Cruikshank (1792–1878) established a tradition of visceral political and social visual satire in Britain that continues to this day.

A number of factors contributed to the flourishing of visual satire in late-18th-century Britain. The reign of King George III (1760–1820) saw the revival of rival political parties – Whig and Tory – after a 45-year hiatus, and revolutions in France and America demonstrated the vulnerabilities of European monarchies. The absence of absolutism in Britain carried with it a relative freedom of the press. Victims of satire were more likely to buy up editions or bribe publishers with a pension than resort to the courts (or worse) to keep unflattering depictions away from the public eye. Technological developments encouraged a switch from verbal to visual satire, and the era witnessed the development of a social context for debate, whether in the coffee-house, club, or on the street. An additional influence was the systematisation of physiognomy in the 1790s by Lavater, who maintained that the mind was revealed by the face and also by gestures. Other important factors include the availability of a ready means of production and distribution in print-shops, new publishers, and, not the least, the appearance of a number of great artists on the scene. 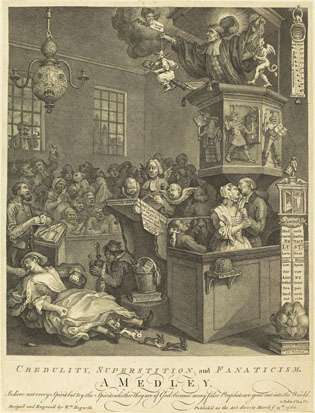 Important precedents can be found in the work of Arthur Pond, Thomas Patch, and James Sayer(s). William Hogarth (1697–1762) was aware of Italian caricature, the exaggeration of human physical features first seen in the work of the Carracci, and theorized a difference between caricature and character (the physical expression of a vice or virtue): his moral paintings, satirising such institutions as arranged marriage, as in Marriage á-la-mode (1743–5), often became prints. George Townshend (1724–1807), a soldier by profession, brought back caricature from his Grand Tour and deployed it mainly against the Duke of Cumberland. But the work of Gillray, Rowlandson, and Cruikshank was more sustained and varied, and stood out in a lively market of crudely executed and hand-coloured prints.

The 18th century: Kings and commoners

After studying briefly at the Royal Academy of Arts under the engraver Francesco Bartolozzi, James Gillray made a living as a commercial engraver before publishing his first political satire in November 1778. All his caricatures were etchings, sometimes with aquatint and/or stipple, and some were also hand-coloured. They were often visible in the window of the print-shop of Miss Hannah Humphrey, with whom he lived. The subjects of his caricatures included George III, satirized as mean Farmer George; the thin Tory prime minister Pitt the Younger and his rival the Whig Fox; and the diminutive but ambitious Napoleon. Gillray also established the character John Bull as the epitome of Englishness – a rotund and unpretentious but honourable country fellow, in contrast to Gillray’s thin, impoverished French Jacobin or debauched English gentleman. While not siding with either the Whig or Tory party, Gillray was involved with the Tory George Canning’s “Anti-Jacobin” publication 17978 and subsequently received a state pension. 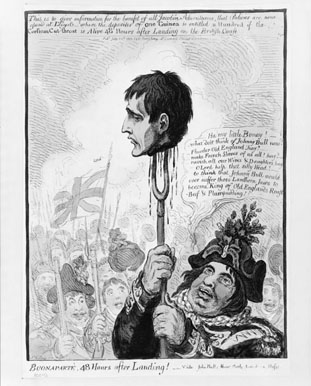 Thomas Rowlandson studied at London’s Royal Academy and in Paris. Nearly bankrupted by a gambling habit, he began to make caricatures, inspired partially by the example of Gillray. He was employed by the publisher Rudolf Ackermann for the Dr Syntax series and also illustrated the literary works of Tobias Smollett, Oliver Goldsmith, and Laurence Sterne. Rowlandson normally worked up his designs with a reed pen, washing with colour before etching the image on copper. Aquatint on his plates was often done by another hand. Rowlandson was more interested in social rather than political satire, and his images of quack doctors are humorously memorable. He also contributed to the popularisation of the John Bull image. 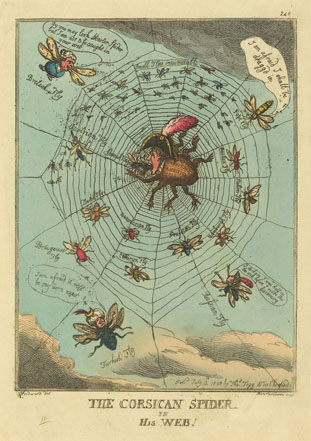 Thomas Rowlandson: The Corsican Spider in His Web, hand-coloured etching, 1808; image courtesy of the National Gallery of Art, Washington, DC

George Cruikshank apprenticed with his father Isaac Cruikshank (1756–1811) and was also influenced by Hogarth and Gillray. He reached maturity in the years of the Napoleonic Wars, which inspired several cartoons featuring the French Emperor’s exploits as “Boney.” In 1820 he took a bribe not to caricature George IV “in any immoral situation” and thereafter devoted more time to social observation and book illustration, notably novels by Charles Dickens. He too contributed to the iconography of John Bull and created mocking stereotypes of the Irish and later the Chinese. Cruikshank’s satirical cartoons, which often include dialogue in speech bubbles or in an accompanying block of text, are evidence of growing literacy rates in Britain. Gillray, Rowlandson, and Cruikshank’s creation of the John Bull figure demonstrate the power of the caricaturist on the public imagination, similar to Thomas Nast’s later Uncle Sam images in the United States.

In the 1830s etching gave way to lithography and wood-engraving, and with this came the decline of the print-shop and its replacement by illustrated magazines and newspapers. As the mass media of their day, these venues for visual satire were more prone to self-censorship as mid-Victorian morality took hold. John Doyle’s (1797–1868) genteel humour and the propriety of John Leech (1817–64) or Sir John Tenniel (1820–1914) in Vanity Fair stand in marked contrast to Gillray’s venom or Rowlandson’s sexual innuendo. The situation in France, where the engine of change was politically driven, provides an interesting contrast. After legal battles resulting in censorship and imprisonment, Honoré Daumier’s lithographic cartoons shifted from political to social satire, while Grandville moved from caricature to book illustration after King Louis-Philippe’s 1835 ban on political cartoons. 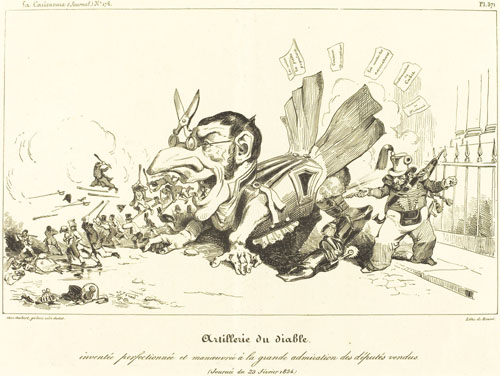 In the 20th century David Low’s work was influential, especially his creation of “types”, which were reminiscent of Gillray and Cruikshank’s “John Bull.” The work of Ronald Searle (1920–2011), Gerald Scarfe (1936–), and Ralph Steadman (1936–) recovered some of the savageness of Gillray and Rowlandson. This complemented an anti-establishment position which can be seen in the cartoons of the magazine Private Eye (founded in 1961) or in the work of Steve Bell for The Guardian newspaper.

Whereas early caricaturists had looked back to the Carracci, later visual satirists referenced Goya’s Disasters of War (Steve Bell) and mainstream artists such as Richard Hamilton could introduce caricature into fine art practice, as in his painting/photomontage, Portrait of Hugh Gaitskell as a Famous Monster of Filmland (1964). In the age of television, Peter Fluck and Roger Law, interestingly both from the print world of illustration, produced three-dimensional caricatures of a quality and savageness reminiscent of Gillray for the ITV series “Spitting Image” (1984–96).

Throughout this history, the enterprise of visual satire was marked by a unifying objective to afflict the comfortable and comfort the afflicted.

Find more images and information through these links, selected by the editors of Oxford Art Online.

Infinite Jest: Caricature and Satire from Leonardo to Levine [exhibition video on YouTube]

National Gallery of Art Image Library [including works by Hogarth, Rowlandson, and Cruikshank]