The following lesson is divided into two parts. The first part features portraits of individuals and the second addresses works depicting more than one person. These images are presented together because in all cases the artists chose not to specify their subjects’ setting nor to include details about their subjects’ occupation or interests. Rather, the artists were deliberately ambiguous about such material concerns, seeking instead to communicate the inner dispositions of their subjects through compositional and medium choices. The self-portraits by Oskar Kokoschka and Käthe Kollwitz, as well as the portrait by Emil Nolde [copyright for image could not be obtained; click here to see image on MoMA’s website] and the double portrait by Kokoschka, are not precise representations of specific people; instead, the artists manipulated their subjects’ appearance to express what cannot be easily observed.

Image Seven, Kokoschka’s double portrait of the art historians Hans Tietze and Erica Tietze-Conrat, reveals a psychological study of the sitters. Kokoschka created portraits for many prominent figures of Viennese society, such as artists, lawyers, scientists, writers, and doctors. Here Kokoschka placed the two figures in an ambiguous setting, inviting the viewer to speculate about their relationship primarily through their facial expressions and hand gestures. As a point of comparison, August Sander’s photograph Farming Generations is a carefully constructed representation of an agrarian family, formally posed for a group portrait. In contrast to Kokoschka’s double portrait, Sander’s methodological photographic process attempts to capture as many physical details as possible about his subject.

“It is a representative example of my work of that period, the student may learn from it to see with his own eyes how the self becomes a constant in a self-portrait that does not vary even after years when age, life, ambitions have changed the persona of the creator. All my self-portraits were painted in the sense of stock-taking, in the view of estimating individuality.” 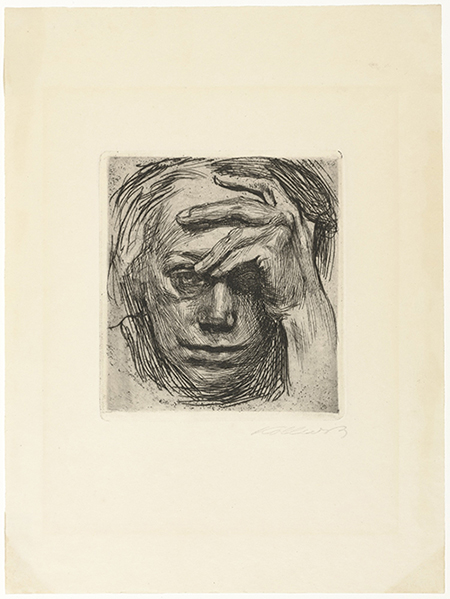 “[Art must be] an understanding between the artist and the people such as there always used to be in the best periods in history. [In] our century, the figurative arts have degenerated to the wretchedness of exhibition galleries.” 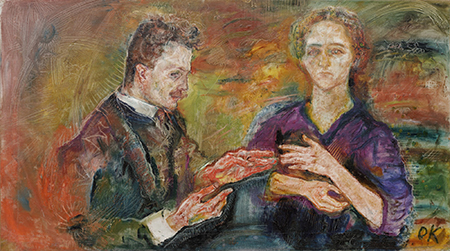 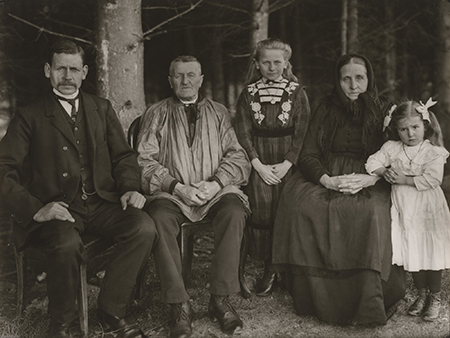 1. Looking at Yourself in the Future (Image Four)

What are gestures and what do they tell us? Gestures often communicate specific feelings or messages. For instance, we wave a hand to say hello. Some gestures can be ambiguous, leading people to interpret them differently.For this activity, divide your students into small groups. Ask each group to create a gesture that communicates the following: happiness, sadness, fear, anger.

During the 1930s, the Nazi party rose to power in Germany. Many artists and intellectuals were affected by the suppression of political, individual, and artistic rights. Some artists, such as Kokoschka, sought asylum outside of Germany, while others, such as Kollwitz, remained in the country for fear of repercussions against family members. Research the impact of political events in Germany during this period on the artists in this guide. As an extension, consider examples of other political events and their impact on other artists.

Ask your students to bring a photograph of themselves taken with family or friends. Students can volunteer to show their picture to the rest of the class for discussion.

5. Faces of Our Time (Image Eight)

Obtain a copy of Sander’s Faces of Our Time or Citizens of the Twentieth Century. Alternatively, you can view Sander’s photographs on the following Web sites:

Choose two or three photographs to compare. List their similarities and differences.

Now that you have spent time looking at a few photographs from one of Sander’s books or from a Web site, what are your thoughts about his work? For instance, do you think that he achieved his goal of creating a record of the people around him during his lifetime?

“This collection of precise and unpretentious photographs is a treasure-trove for lovers of physiognomy and an outstanding opportunity for the study of human types as stamped by profession and social class.”

The purpose of this activity is to enable students to compare the experiences of creating a portrait of a close acquaintance and a self-portrait.

A Portrait of Someone You Know

Create a portrait of someone you know, such as a friend or family member. As you make your portrait, keep track of the decisions you make along the way.

Create a self-portrait. While working, consider the types of materials you choose. Keep track of compositional choices, such as the arrangement of figures or objects in space.