In an art-historical context, the Italian word paragone (“comparison”, pl. paragoni) can refer to any of a number of theoretical discussions that informed the development of artistic theory in 16th-century Italy. These include the comparison between the differing aesthetic qualities of central Italian and Venetian schools of painting (the so-called disegno/colore paragone) and whether painting or literature was the more convincing and descriptive medium. But the term paragone most often refers to debate about the relative merits of painting and sculpture during the Renaissance period. This debate unfolded primarily in Italy but also in the Low Countries (Flanders and the Netherlands) in writings about art and artworks themselves, and informs our understanding of some of the most significant art and artists of the Renaissance. 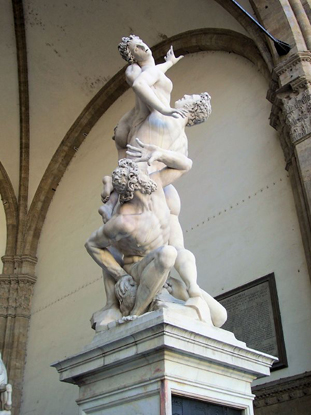 Giambologna: Rape of a Sabine, marble, 1582; photo by Son of Groucho (Flickr), via Wikimedia Commons

The development of the paragoni stems from the fundamental themes of competition and rivalry that color the history of Renaissance art, particularly in Italy. Since the Renaissance involved a “rebirth” of the culture of classical Greece and Rome, Renaissance artists not only admired, but saw themselves in competition with, ancient artists like Apelles and Praxiteles. In doing so they might attempt to improve upon ancient art – either through using the same subject matter or by grappling with a technical challenge presented in an antique work. An example of the latter is Giambologna’s Rape of a Sabine (above), which is composed of three monumental human figures carved from a single block of marble, an amazing feat that ancient writers had attributed to the famous Laocoön group. Renaissance artists naturally also competed with one another, engaging in civic and personal rivalries, like that between the city-states of Siena and Florence, and competitions for commissions, such as the coveted job to create a set of bronze doors for the Florence Baptistery, awarded to Lorenzo Ghiberti after his defeat of Filippo Brunelleschi and others in 1401. Even the most fundamental aesthetic principle of the Renaissance – naturalism, which involved creating idealized versions of the observed physical world – put art in competition with nature.

Painting as mirror of nature

The guiding principle of naturalism and the study of ancient art inform the arguments on either side of the painting/sculpture paragone. Although the various points of each argument were not codified until the mid-16th century by Benedetto Varchi, they had long been rehearsed in various arenas, beginning with the artistic treatises of the mid-15th century. Leon Battista Alberti, in his treatise on painting of 1435 (De Pictura), set forth many of the arguments in favor of painting – that it was the ideal medium for imitating the natural world because it could represent an entire scene as if viewed through a window; that it was a difficult intellectual exercise involving the science of perspective; and that it was best suited for depicting complex narratives, which Alberti considered the noblest type of subject matter. A few decades later, Filarete noted that painting has greater potential for naturalistic representation because of its ability to render color and texture to create the illusion of any material or object. The same themes of the use of color to create illusionistic effects and the intellectual aspects of composing a painting were repeated by Leonardo da Vinci in his extensive notes for a treatise on painting and by Baldassare Castiglione in his Book of the Courtier (begun 1508). That painting required more mental ability than physical effort and technical skill was important in painters’ attempts to elevate their art to the level of a learned, scholarly endeavor. 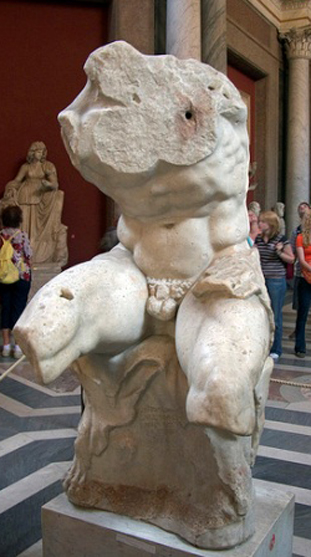 Sculpture and the art of antiquity

Arguments in favor of sculpture appeared with less frequency in Renaissance writings, but instead played out in the strength of the development of the medium itself during the period and its implicit connections to antique art. 15th-century Florentine sculptors largely initiated the stylistic developments of the Renaissance, so much so that in the introduction to his treatise on painting, Alberti acknowledged the extraordinary accomplishments of four sculptors (Brunelleschi, also a famed architect; Ghiberti; Luca della Robbia; and Donatello) and only one painter (Masaccio, who had already been dead for several years). Given the close study Renaissance artists made of works of ancient art, they were well aware that the bulk of what survived consisted of marble and bronze statuary and reliefs. Not only did this situation illustrate the advantage of sculpture’s durability, it also meant that painters depended on ancient sculptures like the Belvedere Torso as models – often for the poses and idealized representations of human figures – to give their own works classical flavor. A more common defense of sculpture was related to its three-dimensionality: painting could never achieve the naturalism of sculpture because it could only approximate depth and volume, while a sculpture existed in volumetric space like the thing it imitated and could be viewed from many different angles. In his contribution to Varchi’s discussion of the paragone, Michelangelo argued that painting was only good insofar as it imitated the three-dimensional qualities of sculpture, a point that his follower Benvenuto Cellini supported with the evidence that Michelangelo himself worked under this principle and was recognized by many as the greatest painter in history. 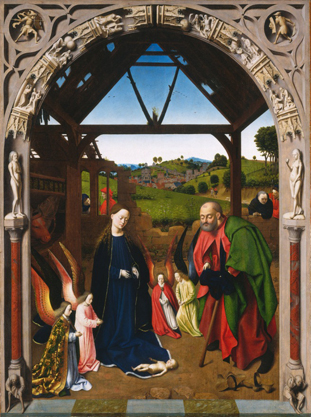 The debate over the merits of painting and sculpture also appears in works of art from the period. These examples often involve paintings which imitate sculpture and sculptures that imitate painting, a strategy of undermining claims about the unique advantages of one art over the other. Sculptors – first and most notably Donatello for his Feast of Herod and marble schiacciato reliefs, and Ghiberti for his Gates of Paradise – employed systems of linear and aerial perspective in narrative scenes, which painters had claimed as essential components of good painting. These reliefs are some of the most admired works of the early Renaissance, and had a great impact on the next generation of sculptors and painters alike. In works like his Nativity (above), Petrus Christus juxtaposed a rich, colorful scene, made possible by the recent adoption of the medium of oil painting among Flemish painters, and a fictive stone arch with grisaille statues and reliefs. Christus contrasts the naturalistic colors and textures that could be represented in painting with the monochrome sculpture, while showing that a painter can also create the effects of sculpture on a flat surface. Titian used a similar device in his Portrait of a Woman (“La Schiavona”), including a fictive stone relief of his subject in profile next to the colorful, vividly rendered portrait. To show that painters could also depict figures from multiple angles, they incorporated reflective surfaces into their compositions (also a virtuoso demonstration of illusionistic skill). According to a 15th-century source, Jan van Eyck composed a magnificent painting (now lost) showing a nude woman emerging from her bath, her back reflected in a mirror on the wall. Titian’s Venus with a Mirror (below) was likely inspired by the written description, and likewise responded to the argument in favor of sculpture that only a figure sculpted in the round could be seen from multiple viewpoints.

Other works emphasized connections with antiquity. In their use of materials – bronze and marble – and revival of types that had survived into the modern era – equestrians and portrait busts, for example – Renaissance sculptors overtly referenced ancient sculpture, thereby illustrating its advantages in creating lasting memorials. Painters such as Sandro Botticelli and Andrea Mantegna recreated antique paintings and drawings using ancient writings, such as Lucian’s description of an allegory of calumny (slander) by the Greek painter Apelles. Such works not only intended to weaken the claim of a special affinity between Renaissance sculpture and the antique, they flaunted the artists’ education and familiarity with ancient texts.

Titian: Venus with a Mirror, oil on canvas, c. 1555; image courtesy of the National Gallery of Art, Washington, DC

The rising status of the visual arts

The debate over the primacy of painting or sculpture greatly contributed to evolving views about the importance of the visual arts and the social status of artists. Learned scholars and patrons engaged in the debates alongside the artists themselves, helping to recast painters and sculptors as intellectuals rather than craftsmen on the level of carpenters and weavers. Not only did this development translate into rising social status for artists – particularly evident in the fame and admiration awarded to Michelangelo, Raphael, Titian, and Leonardo da Vinci – but it also contributed to the establishment of academies of art. Academies, first in Italy and then throughout Europe, institutionalized the theoretical and aesthetic principles that emerged from the paragoni, leaving an impact on Western artistic traditions for centuries.

Heilbrunn Timeline of Art History, Metropolitan Museum of Art, The Rediscovery of Classical Antiquity [essay with images and links to related content]