Through a range of diverse artistic, journalistic, and documentary modes, American women have actively shaped the medium of photography. By the end of the 19th century, evolving social structures in the domestic sphere led more women to pursue higher education and eventually to establish professional lives. Concurrently, simplified photographic processes including dry-plate printing and smaller mechanisms like the George Eastman Company’s 1888 Kodak camera eliminated the need for cumbersome equipment and darkroom processing. Through its signature “Kodak Girl,” the Eastman Company encouraged thousands of women to take up photography between 1890 and 1900, thereby laying the groundwork for a legacy of talented women in art photography and photojournalism. 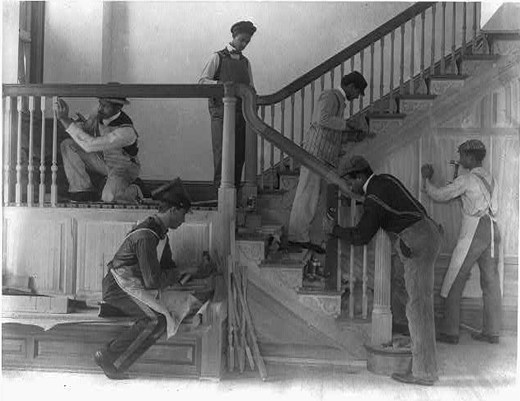 The field for professional women photographers in the United States expanded substantially in the opening years of the 20th century. From fewer than three hundred in the 1890s, nearly 5,000 women photographers were active by 1920. Technical developments including the half tone process helped expand photography to magazine and book illustration and fostered new opportunities for women such as Frances S. and Mary E. Allen of Deerfield, Massachusetts who produced photographs of New England architecture and rural genre scenes for publication. Frances Benjamin Johnston, whose photographs of the White House, elite social events, and celebrity portraits earned her the title “photographer of the American Court,” were featured in Ladies’ Home Journal and Harper’s Weekly, while her carefully composed photographs of educational institutions such as the Hampton Institute in Richmond, Virginia resulted in published albums that mark an important facet in documentary practices. And although she would not publish her work widely, after photographing Staten Island’s well-to-do residents and lavish estates, experienced practitioner Alice Austen turned her camera toward Manhattan’s multitude of immigrants and street vendors with a clear documentary focus.

Despite significant gender-based limitations prevalent at the turn of the 20th century, photography offered many women creative, educational, and professional opportunities. Publications offering practical instruction and facilitating apprenticeships, such as American Amateur Photographer and Outing, encouraged women to take up photography as both an amateur practice and a serious profession. Acknowledging the restraints placed against women’s participation in photographic camera clubs and in pursuing professional training, noted self-starter and staff writer for American Amateur Photographer Catherine Weed Barnes Ward joined other prominent voices in promoting the economic and aesthetic advantages of photography to women. Indicating the extent to which the photography of American women was gaining international momentum, Johnston assembled the work of twenty-eight women from across the United States to be shown at the 1900 International Photographic Congress in Paris coinciding with the Exposition Universelle. The group of 142 photographs was later exhibited in Saint Petersburg and Moscow.

While women were active on a number of photographic fronts, allusions made both by men and women to feminine grace and sensibility often positioned women as uniquely apt portraitists because they could unveil a sitter’s inner character while using aesthetically inclined compositional tactics. Toward the end of the 19th century and into the 1910s, the practice of home portraiture, predominantly featuring mothers and children, was seen as a socially appropriate and fairly profitable vehicle for women photographers. Producing likenesses that reflected middle- and upper-class ideals of individual character, familial affection, and social sophistication, women such as Jane Reece (Dayton), Willamina Parrish (St. Louis), Mathilde Weil (Philadelphia), Elizabeth Buehrmann (New York and Chicago), Mary Bartlett (Chicago), and Gertrude Käsebier (New York) embraced soft-hewn lighting effects and comfortable poses to portray their clients’ inner character. In addition to portraits, American women explored a variety of subjects, as exemplified by Anne Brigman’s spare, enigmatic studies of nude female figures in dramatic landscape settings, Sarah C. Sears’s botanical works, Myra Albert Wiggins’s genre studies in Oregon, and representations of Native American groups by Emma Jane Gay in Idaho, Kate Cory, and Laura May Armer in the American Southwest, and Emma Belle Freeman in Northern California. 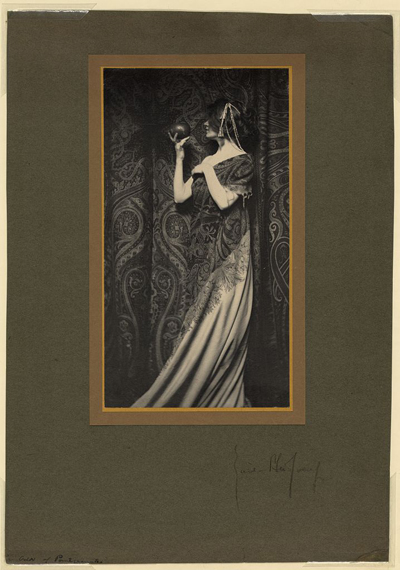 Although divisions between amateur and more specialized practices were far from distinct with regard to exhibitions, organizations, and publications, some American women established professional careers that merged studio portrait-making with deliberately aesthetic techniques, thereby helping to shape art photography at the turn of the 20th century. Often adopting the soft-focus convention characteristic of Pictorialism, the leading movement in art photography, many American women launched successful studio practices, as exemplified by Adelaide Hanscom and Blanche Cumming in San Francisco, and Eva Watson-Schütze in Philadelphia. In New York, Zaida Ben-Yusuf, a native of Britain, opened a studio on Fifth Avenue where she produced artistically conceived photographs that combine subtly expressive gestures with intricate patterns, as in The Odor of Pomegranates, c. 1899. Eva Watson-Schütze’s closely cropped, featherlike portraits of friends in Philadelphia and later in Chicago earned her recognition in art photography circles, most notably, London’s Linked Ring to which she was elected in 1902. That same year, Waston-Schütze served as one of two female founding members, along with Gertrude Käsebier, of the Photo-Secession, led by Alfred Stieglitz and dedicated to the promotion of art photography in the United States. A leading voice for women in art photography, Käsebier likewise attained national recognition for her evocative portraits and soft-focus scenes of women and children as seen in her 1899 work The Manger. Although she would leave the group in 1912, Käsebier remained steadfast in her advocacy for women photographers. Like many of her contemporaries, Doris Ulmann began a successful New York portrait business before shifting attention to photographing impoverished communities in the Appalachian Mountain region and the South Carolina Islands through a pictorialist aesthetic of soft-focus and narrative compositions.

While pictorialist impulses continued to flourish into the 1920s, women’s participation in photography from the 1920s through the 1940s expanded considerably in both art and commercial outlets. On the West Coast, photographers associated with the f/64 group turned away from painterly aspects of Pictorialism by adopting a photographic vocabulary of close-ups and overall clarity reflective of European modernist practices. Along with photographs by Alma Lavenson and Sonya Noskowiak, works such as Imogen Cunningham’s Aloe Bud, 1930 demonstrated the group’s attention to formal elements and self-expression. Unaffiliated with the f/64 group, yet similarly concerned with composition, Laura Gilpin’s photographs from the 1930s reveal a sustained interest in the peoples and landscapes of the American Southwest. Initially trained by f/64 chief torchbearer Edward Weston, Tina Modotti applied the movement’s rigorous formalist strategies to a series of socially conscious subjects such as workers’ movements, as seen in Hands Resting on Tool (1927) and Workers Parade (1926). 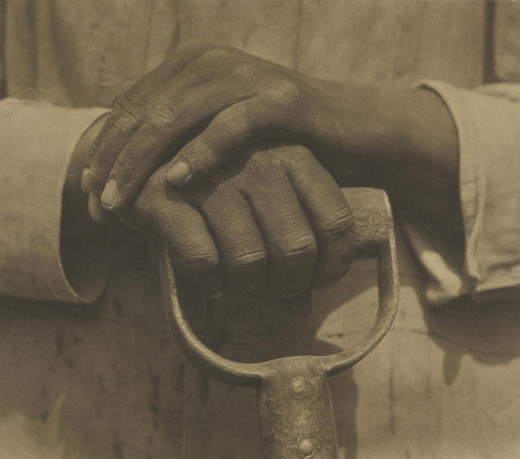 In the field of advertising photography, Canadian-born Margaret Watkins’s work for the J. Walter Thompson agency and Macy’s, which combined modernist compositional tactics with elegant lighting, garnered industry-wide recognition and a position teaching advertising photography at the Clarence White’s School for photography. Other leading figures such as Toni Frissell and Louise Dahl-Wolfe, who began their careers in advertising photography, were, by the 1930s, rapidly transforming fashion photography. Following photographic projects for the Women’s Army Corps, Frissell worked for Vogue and Harper’s Bazaar where she revolutionized the industry by taking models out of the studio and photographing in natural settings (see Woman wearing tennis outfit). Engaging dynamic angles, rhythmic patterns, and vibrant colors, Dahl-Wolfe helped shape fashion photography as illustrated in Harper’s Bazaar for more than two decades. 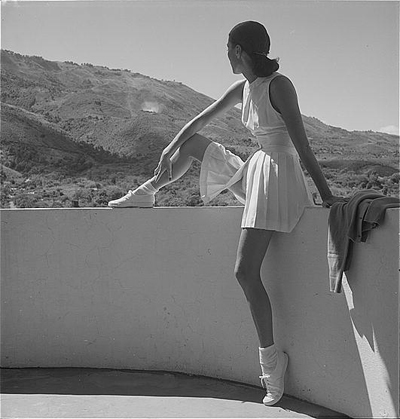 Toni Frissell: Woman wearing tennis outfit, seated on wall, with one leg on top of wall, looking at the mountains behind her, nitrate film negative, 1947 (Washington, DC, Library of Congress, Prints and Photographs Division); image courtesy of the Library of Congress

In response to the economic instability and the concurrent agricultural devastation during the Great Depression, President Franklin Delano Roosevelt launched the Farm Security Administration in 1935 as part of his New Deal program. Headed by Roy Stryker, the FSA’s Historical Section soon enlisted many of the country’s most accomplished photographers to document the experiences of Americans during this turbulent era. Chief among the women employed for the agency was Dorothea Lange, whose photographs depicting migrant laborers and the exodus of thousands of Americans from the Plains to California are characterized by a direct approach that sought to blend perceived neutrality with emotive appeal. Initially hired as a darkroom technician, Esther Bubley became a staff photographer focusing her camera on unguarded yet poignant moments in the lives of ordinary American women. Issues of economic disparity and race relations are balanced by careful composition in the work of Marion Post Wolcott. Likewise in the 1930s and ‘40s, photographers such as Lisette Model, Berenice Abbott, Helen Levitt, and Barbara Morgan, whose work in New York explored a broad range of urban issues related to racial inequality, effects of war, and lives of children, helped actively shape the perspectives and legacy of the Photo League, an organization devoted to addressing social complexities through photography. Still other American women, many who were European émigrés, such as Hansel Mieth, Nina Leen, and Lisa Larsen, established prolific careers as photojournalists for Life magazine from the mid-1930s through the 1940s. 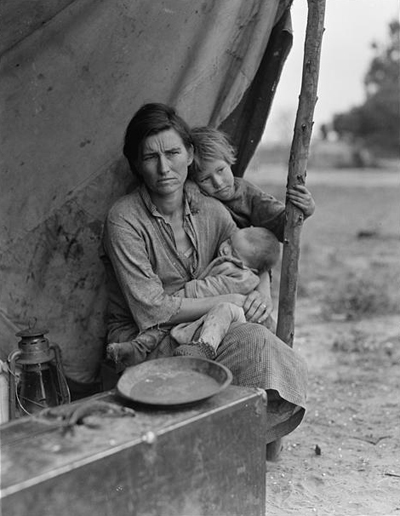 As millions of women entered the workforce during the Second World War, the field for professional women photographers expanded substantially to approximately 10,000, indicating a twofold increase from 1920. Covering the conflict from a range of perspectives, photojournalists such as Therese Bonney, Margaret Bourke-White, and Lee Miller helped establish a professional framework through which women in the second half of the twentieth century would continue to shape the medium of photography.