European and American Printmakers in the 19th Century

The nineteenth century was one of the most dynamic periods in the history of Western printmaking. Prints – defined as works of art made in multiples (each called an impression) by pressing an inked block or plate bearing a design onto a support, typically paper – had been circulating in Europe since the early fifteenth century. These early prints were primarily woodcuts, engravings, and etchings depicting Christian subjects, characters and stories from classical mythology, scenic views, and reproductions of celebrated paintings and sculptures. During the nineteenth century, however, new subjects, styles, and techniques helped establish the modern impulse in prints. 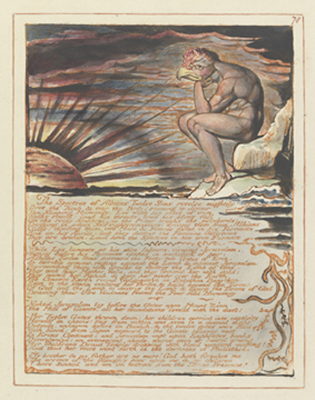 The English poet William Blake has long been considered a pioneering figure in these developments, despite the fact that he was little known during his lifetime. Blake derived much of his subject matter from his unusual philosophical and theological beliefs and devised new printing processes and techniques, such as monotype and relief etching. Relief etching allowed Blake to self-publish illustrated books of his own poetry, with both words and images produced from the etching plates and watercolour added by hand (see Jerusalem, Plate 78). Blake’s more influential and successful contemporary, the Spanish painter Francisco de Goya y Lucientes, enjoyed the patronage of the aristocracy but looked to printmaking as an appropriate venue for creating images with a biting satirical edge, attacking the horrors of war, the Catholic Church, and conservative, stratified Spanish society. In his highly inventive series of etchings Los Caprichos (1799), Goya fully exploited the intaglio technique aquatint, which creates tonal qualities similar to wash drawings (see The Sleep of Reason Produces Monsters). 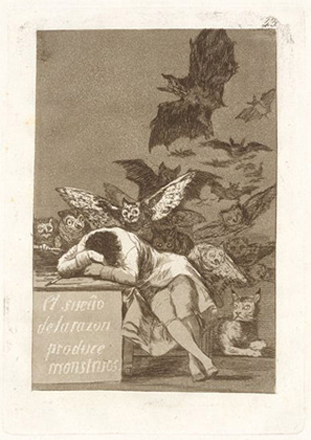 By the 1820s, artists had begun to fully exploit the relatively new process of lithography. Because the design for a lithograph is drawn or brushed onto a smooth stone instead of carved or etched into metal or wood, lithographs are capable of much more varied aesthetic qualities – tonal gradation, flowing lines, and fine textures. The French painter Eugène Delacroix made some of the earliest high-quality art lithographs as illustrations for the French translation of Goethe’s Faust, published in 1828. Lithography was also suitable for magazine illustrations and producing large, inexpensive pictures meant to be hung in the home. These types of prints were the domain of the prolific French lithographer and sculptor Honoré Daumier, who created satirical images for leftist periodicals like La Caricature during the politically unstable decades around the middle of the century. Daumier’s satire was often less subtle than that of Goya’s Caprichos, and he was even jailed briefly in 1832 for creating Gargantua, a crass, unflattering image of the French king Louis-Philippe. 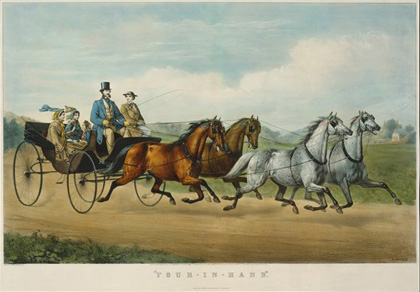 American developments and the etching revival

The development of printmaking in the United States took a much different course than in Europe. In the early part of the century, the few skilled printmakers in America focused on commercially viable ventures – illustrations for books and magazines, engravings reproducing history paintings, such as Asher Brown Durand’s Declaration of Independence (1820) after the painting by John Trumbull, and chromolithographs of American life like those by Currier & Ives (see Four-in-Hand). Winslow Homer, who would become one of America’s most renowned Realist painters, started out as an illustrator, making wood engravings for the popular magazine Harper’s Weekly. He served as an artist-reporter during the Civil War, making straightforward but sympathetic images of Union soldiers in camp, and later in his career made etched reproductions of many of his paintings (see Saved). By the final decades of the century, many printmakers had turned toward that mainstay of American art, landscape. Thomas Moran, for example, masterfully represented the wild and sublime qualities of the land in both lithographs (e.g., Solitude, 1869) and in etchings (e.g., The Mountain of the Holy Cross, Colorado,1888), a medium that was then gaining renewed importance. 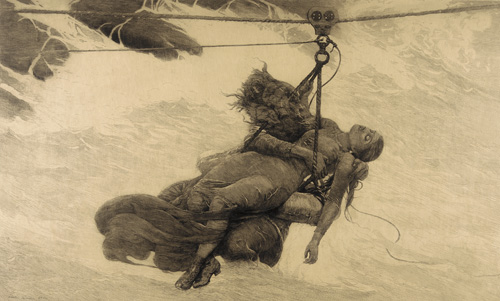 Etching had lessened in popularity over the course of the nineteenth century, displaced by the ubiquitous lithograph. By the middle of the century, however, artists in Europe and later America advocated an etching revival to counter the commercial associations printmaking had acquired. In France, the charge was led in part by Charles Méryon, who is known for his haunting views of Paris from the 1850s. The American James McNeill Whistler, also at the center of the etching revival, promoted prints as fine art objects, as opposed to images made cheaply and in endless quantities. He printed his etchings in very small editions on expensive paper and made each print unique by varying the way he wiped the excess ink from the plates before they were printed (see Fish Shop, Venice). 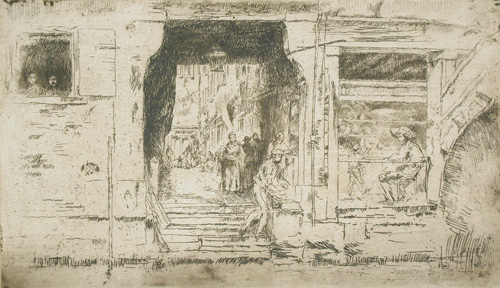 At the end of the century, many French Impressionists turned to printmaking, inspired by Japanese ukiyo-e woodblock prints. These colourful representations of courtesans, actors, and domestic scenes of women bathing were composed from high perspectives, with sharp spatial recession and flat areas of colour and pattern, techniques that Henri Toulouse-Lautrec and Jules Chéret used in posters advertising Parisian cabarets and entertainers. The American expatriate painter Mary Cassatt made a series of colour etchings (1891) that exemplify Impressionists’ interpretation of ukiyo-e prints, some of them with clear precedents in the work of Utamaro, whom Cassatt particularly admired. Henri Rivière, another central figure in japonisme, at first used the old-fashioned woodcut medium before turning to lithography to achieve the look of Japanese woodblocks.

Some Post-Impressionist primitivists also turned to woodcut because the medium originated in a pre-industrial context and employs a natural, “primal” material. For artists like Paul Gauguin, this involved a rejection of Western, industrialised society in favor of non-Western cultures untainted by modernity. After an extended stay in Tahiti, Gauguin created a series of roughly textured and crudely worked woodcuts, such as Nave Nave Fenua (Delightful Land), (1893–4). Like Gauguin, the Norwegian painter and technically innovative printmaker Edvard Munch also consciously evoked the qualities of the wood in prints like The Kiss (1897), for which he treated part of the block so that the grain would create a textured background for the silhouetted figures.

These modernist approaches to visualizing artistic process and materials played a crucial role in the development of twentieth-century modernism. This integration of style and technique, along with the overall technical, stylistic, and conceptual shifts nineteenth-century printmakers oversaw made possible the vibrant activity in printmaking in the decades to follow.

Find more images and information through these links, selected by the editors of Oxford Art Online.