Art that uses the Internet not only as its tool of production and distribution but also as its source material or medium, and exploits or reflects the Internet’s inherently connective characteristics. While not a distinct art form or style, Internet art has been discussed in connection to the history of media art, predominantly through studies of the screen (see Bosma, 2013; Manovich, 2001) and the way things are framed, including still or moving images (see Video art and New media art in India). Internet art exceeds this narrow definition and its lineage can be better understood in the context of telecommunications, with a focus on information exchange and its occurrences through networked channels of transmission and their inherent politics. Because of this it is linked to Conceptual art practices, including intermedia art, Fluxus, and Correspondence art (such as the work of Knowles, Alison or Filliou, Robert), which explored not only new modes of production but also formats of display.

Specific advancements in network technology and the way they entered the everyday are also reflected in the work of new media artists (of which Internet art can be considered a related practice). ARPANET, developed at DARPA (Defense Advanced Research Projects Agency) in America in 1969, launched computer networking, enabling international and remote communication; the Internet as it is manifest in the World Wide Web, invented by Tim Berners-Lee at CERN, Switzerland, in 1989, enabled users to visualize computational processes; the proprietary web (or Web 2.0) as discussed by Tim O’Reilly and Dale Dougherty in 2004 gave prominence to ready-to-use services (applications) and Internet-enabled devices. Artists such as Kit Galloway and Sherrie Rabinowitz (1950–2003) addressed access to network technologies with their founding of the Electronic Café in Santa Monica, CA, in 1988, while Jodi.org (formed by Joan Heemskerk (b 1968) and Dirk Paesmans (b 1965)) won a Webby Award in 1999 for net art projects challenging the conventions of Internet protocols such as their site, http://404.jodi.org/.

Because it depended on networked transmissions, early Internet art relied on sharing server space to host and disseminate work. The Thing, founded by artist Wolfgang Staehle (b 1950) as a Bulletin Board System (BBS) in 1991, gave life to an international community of artists who not only discussed contemporary art but also fostered the development of forms of online activism by artists such as RTMark (USA) or Electronic Disturbance Theatre (USA). The Thing also had different national iterations such as thething.it (Rome), thing.de (Berlin), and thing.ch (Basle), highlighting the international and collaborative nature of the network, while other online spaces for accessing Internet art such as Rhizome (founded in New York in 1996) and Mute (founded in London in 1994) focused on publishing information about the Internet and the ever-changing landscape of new media art production. 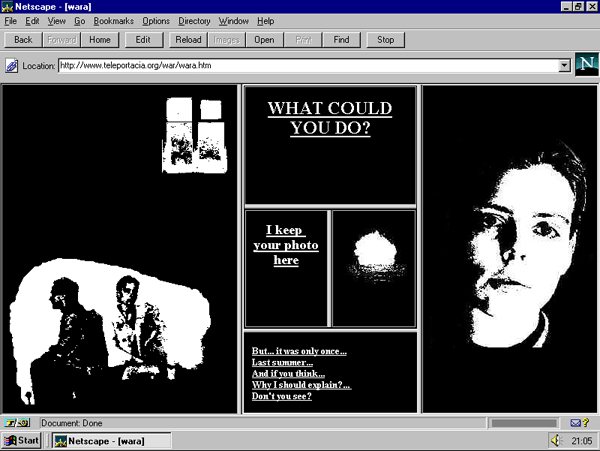 Olia Lialina: My Boyfriend Came Back from the War, internet art, 1996; image courtesy of the artist.

Artists, critics, and curators such as Jodi (Netherlands), Heath Bunting (b 1966; UK), Rachel Baker (UK), Vuk Ćosić (b 1966; Slovenia), Olia Lialina (b 1971; Russia), and Alexei Shulgin (b 1963; Russia), who initially met on the mailing list Nettime founded by Geert Lovink (b 1959; Netherlands) and Pit Schultz (b 1965; Netherlands) in 1995, explored the possibilities of working with converging communication technologies and the then-emerging graphical web. The work of this international group, within which artists had individual practices (the group was not a movement), began to epitomize what is now known as net.art. My Boyfriend Came Back from the War (1996) by Lialina, Tigertxt (2001) by Rachel Baker (as part of the collective irational.org), and Form Art (1997) by Shulgin show the diversity of the practices and explorations of the artists associated with net.art. Although the group met on various occasions (such as the Next 5 Minutes festival in Amsterdam in 1996), the context in which their work was publicly shown to a general (and offline) audience was Documenta X (1997) at Kassel, curated by Catherine David. This iteration of the quinquennial art event has often been used as an example of curatorial approaches to displaying net.art that reinforced the misunderstandings of online practices by the contemporary art world, yet it was also one of the first times that a series of web-based works commissioned for online display on a purposefully built website were shown in a dedicated physical space (called the The Hybrid Workspace laboratory, curated by Simon Lamunière).

Internet art in the decade roughly from 1995 to 2005 was characterized by an interest in exploring the possibilities of the network, specifically in relation to interfaces, hacking systems, and disruptive uses of computer code and software. (This differs from the focus on visualization and distribution characteristic of the years after the rise of Web 2.0.) Projects like r a d i o q u a l i a, initiated by artists–curators Honor Harger (b 1975; New Zealand) and Adam Hyde (New Zealand) in 1998, or Web Stalker (by the group I/O/D) are exemplary, as are projects based on broadcasting online, streaming audio and video, or short messaging systems. Projects often used computer connectivity to enable remote participation, such as biotechnology artist Stelarc’s performance Parasite (1997) in which networked computers tracking Internet search engines controlled muscle stimulators attached to the artist’s body. The art work Biennale.py created by the duo Eva and Franco Mattes (both b 1976; Italy) (formerly known as 0100101110101101.org) for the 49th Venice Biennale (2001) was a gesture to hack systems both computational and artistic: the work was a virus that was released on the opening night of the international event. Projects critiquing network infrastructure and fostering socially engaged practice are exemplified by those of the collective VNS Matrix. Founded by Virginia Barratt, Julianne Pierce, Francesca da Rimini, and Josephine Starrs in 1999 in Melbourne, Australia, the collective was associated with cyberfeminist practices and explored gender and identity in relation to emerging technology. The hypertext installation work Dollspace (1997–2001) by da Rimini is an example of the attitude of the group (see also Hershman (Leeson), Lynn and the work of Young-Hae Chang Heavy Industries in Korean art after 1970).

Much Internet art and the discourse around it was encountered at new media arts festivals, such as Transmediale (started in Berlin in 1988 as an offshoot of a film and video biennial) and FILE, the Electronic Language International Festival founded in Brazil in 1999. While these endeavours were mostly carried out by the artists themselves, from an institutional point of view, this period was also characterized by the emergence of initiatives aimed at supporting the production of Internet art and fostering the commission and collection of web-based works. Curator Steve Dietz was one of the most active in this context. As the new media curator of the Walker Art Center, Minneapolis, MN, Dietz founded the online exhibition space of the institution, Gallery 9 (1997–2003) and promoted the acquisitions of commissioned artworks. A few years later, the Tate, London, began a programme of net art commissions that were displayed within its own website; the Whitney Museum of American Art, New York, included Internet art projects in its 2000 Biennial. Other independent initiatives such as the ‘digital foundry’ äda’web (1994–8) founded by Benjamin Weil as part of the Digital City, Inc. enterprise (and later acquired by the Walker Art Center) and Turbulence (1996–), a project of the New Radio and Performing Arts, Inc., were also devoted to the support of Internet art. 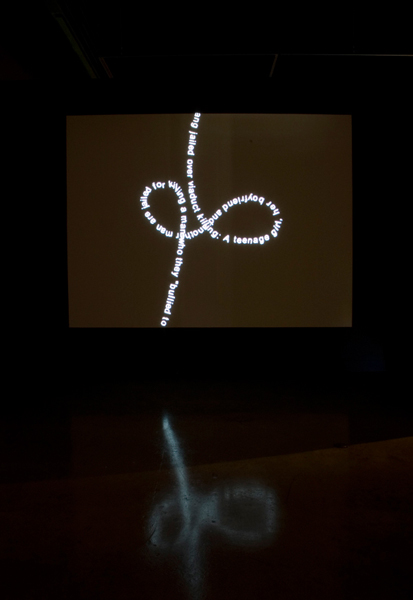 With the rise of the web as a mass medium and the increasingly ubiquitous public use of search engines, artists began to experiment more with ready-to-use services and Internet-enabled devices. Many locative-media projects, web-enabled performances, streaming video, or live data–driven art installations of this period, such as Decorative Newsfeeds (2004) by Thomson & Craighead (Jon Thomson (b 1969) and Alison Craighead (b 1971); both UK), critiqued the everyday experience of networked telecommunications enabled by the Internet. UK artist Heath Bunting (a co-founder of irational.org along with Minerva Cuevas and others) has consistently maintained a critical approach to the widespread use of and corporate control of Internet technologies, establishing networks of public media labs and pirate radio stations.

This period also saw the birth of ‘Surf Clubs’, a form of artistic expression that can be seen as a development akin to the early BBS communities but using the blog as a medium of production (Ramocki, 2008). Nasty Nets began its activity in 2006 and brought together artists, curators, and critics such as Marisa Olson (b 1977) and Paul Slocum, inspiring the growth of similar initiatives such as Spirit Surfers and Double Happiness. Olson, along with writer Gene McHugh, was a key figure in discourses around Post-Internet art, which held that that Internet art was bypassing its own medium to inhabit gallery spaces by using Internet culture and the web as source material (often translating virtual objects into real-world ones), nullifying the divide between the virtual and the physical. Artists epitomizing this shift, many of whom gained acclaim within the commercial art system (unlike their predecessors), were Cory Arcangel, Constant Dullaart (b 1979; Netherlands), Harm van den Dorpel (b 1981; Netherlands), Lizzie Fitch (b 1981; USA), and Ryan Trecartin (b 1981; USA).

The use of discussion forums, blogs, and comment threads to connect online artistic communities internationally has meant that proponents of Internet art have participated in the field’s own (near instant) critique, reflection, and self-historicization. Thus, an appreciation of Internet art cannot be separated from an understanding of the spaces and resources that enabled its production, including the politics of their accessibility. An example is the work of the Raqs Media Collective (formed in Delhi in 1992) and their founding of the Sarai Programme for research and production, and an attendant network of laboratories in the less-developed areas of the city that taught computer programming. Independent initiatives focused on challenging ‘the proprietary web’ and fostering collaboration (using open source methods and tools) continued well into the 2010s. A well-known example is the Free Art and Technology (F.A.T.) Lab founded in 2007 by a group of artists and technologists ‘to enrich the public domain through the research and development of creative technologies and media’ (F.A.T. Lab, 2015). One of their workshops, Facebook Resistance, was presented at Transmediale Festival (Berlin) in 2011. Museums also started to re-explore the relationship between the arts, design, and technology within the framework of start-up culture, such as the NEW INC initiative conceived by the New Museum in New York in 2013 to operate as an in-between co-working space and a programme for professional development. Since the 2010s, independent curators have increasingly shown interest in developing new approaches to commissioning and displaying web-based art, often experimenting with the relationships between the web-based exhibition and the gallery environment. Examples include CuratingYouTube (2007), a curatorial project exploiting the properties and working of YouTube, and the ‘Facebook Art Gallery’ #0000FF, whose goal was ‘to enhance facebook users’ visual experience and challenge the network’s limitations’ (#0000FF, 2014), both examples that rely heavily on the infrastructure and architecture of the adopted platform.