American painter, sculptor, conceptual artist, writer and curator. Hammond became active in feminist and lesbian art circles following her move to New York in 1969 after receiving her BA from the University of Minnesota in 1967. Hammond soon co-founded the feminist cooperative gallery AIR in 1972 and served as co-editor of the feminist journal Heresies in 1976. In 1984 she moved to New Mexico and later became a full professor at the University of Arizona, Tucson, where she taught from 1988 to 2005. Her book Wrappings: Essays on Feminism, Art & the Martial Arts surveys 1970s feminist art. She also wrote the first history of American lesbian art, Lesbian Art in America: A Contemporary History (2000). 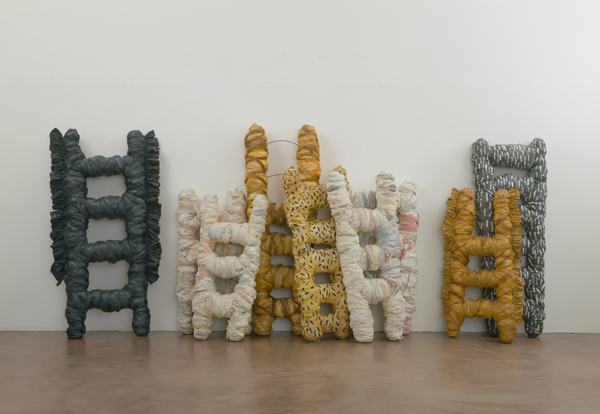 Her artistic practice spans four decades and a variety of media, including sculpture, painting, and some conceptual work. Inspired by movements such as Post-minimalism as well as feminism, Hammond’s oeuvre includes abstraction and representation, and always a keen awareness of surface and materials. Early monochrome abstract paintings of the 1970s had layered thickly painted surfaces that called attention to both the materiality of the paint and of the canvas. Hammond’s focus on materials also led her to create four series of fabric sculptures of recycled rags and cloth to evoke the personal histories of women. The Bags (1971) and Presences (1972) series are shapes of purses and human forms created by layered cloth thickly covered in acrylic. The Floorpieces series (1973) were braided and woven from fabric found by the artist and her daughter in dumpsters, then placed directly on the floor. Examples from her Wrapped Sculptures series, such as Kudzu (1981; Hartford, CT, Wadsworth Atheneum) and The Meeting of Passion and Intellect (1981; Washington, DC, N. Mus. Women A.), operated on a much larger scale and are some of her best known pieces (see also Hunkertime, 1979–80).

Following her move to New Mexico, Hammond’s artistic and scholarly practice continued to investigate women’s lives and issues of difference. By the 1990s and 2000s, her paintings adopted a large, installation-size scale and a variety of materials. Farm Ghosts: The Wife’s Tale (1991; artist’s col.) is a three-dimensional installation about the hardships of women’s domestic labor. Hammond incorporated elements from a farmhouse, such as a quilt, linoleum floor, tin ceiling, and washbasin and washcloth placed on the floor in front of the hung work. Hammond also continued to work in abstraction in later large-scale works such as Suture (2002; artist’s col.), whose monochromatic hues and heroic scale rival that of Abstract Expressionist male painters, such as Mark Rothko or Barnett Newman. Lucy Lippard discusses these later works as “formal maps of emotional terrain,” comparing their layered painterly surfaces to wounds on a body, and thus maintaining a feminist voice in her work.