Raised structure for passage over a declivity or obstacle. Until the advent of railways most important bridges spanned rivers, canals or sea inlets.

Bridge building and renovation was an essential part of imperial building programs in the Islamic lands and often reflected a ruler’s ambitions to stake out and control territory. Many early bridges were decorated with stone plaques that commemorated their patron. The piers of some stone bridges built in northern Mesopotamia (now Turkey) in the 12th and 13th centuries are decorated with relief sculpture, including Signs of the Zodiac at Cizre (1164) and figures in Turkish military dress at Hasankey (see Islamic art, §II). This tradition was also adopted in Egypt, for example in the north face of a bridge (1226–7) over the canal of Abu‛l-Munagga, near Cairo, which is decorated with 40 lions passant. 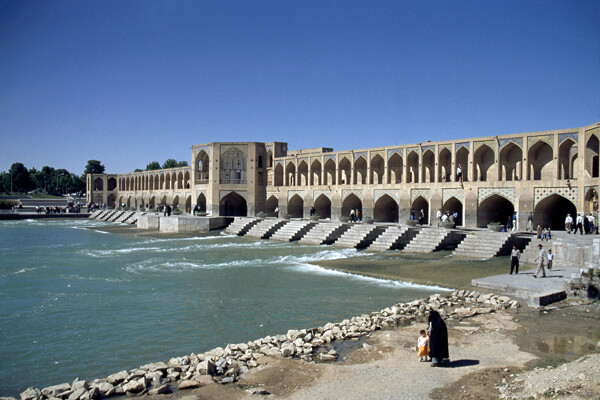 In later centuries, bridge building became a mark of imperial sway. For example, when the Timurid ruler Shahrukh (r. 1405–57; see Timurid family, §II, (2)) intended to make Merv in modern-day Turkmenistan his capital, he ordered the construction of a large number of civic amenities, including several bridges, although the city later fell into decay when he transferred the royal residence to Samarkand. Shah ‛Abbas (r. 1588–1629; see Safavid family, §II, (2)) built bridges throughout his empire in order to improve communication and trade. The lavish building program for his new capital at Isfahan included several bridges over the Zaindeh River, such as the Si-o-sih pul (Bridge of 33 [Arches]; 1602), constructed by his generalissimo Allahvardi Khan that linked the main avenue of the city, the Chahar Bagh, to the Armenian suburb of New Julfa. Downstream to the east, the Khwaju Bridge (1642–67) has 24 arches and covered arcades on two stories, separate lanes for pedestrians and caravans and steps down to the water on the lower side of every pier. These bridges not only controlled the river flow but also provided places for recreation and leisure. Similarly, the Mughal family emperors constructed numerous bridges along the highways that connected various capitals such as Agra and Kabul.

The Ottoman family rulers were also notable bridge-builders, and a large number of Ottoman bridges are still standing. For instance, Edirne, the early capital of the Ottoman Empire, boasts a multitude of bridges erected or renovated by various sultans and pashas, and the nearby Uzun Köprü (“Long Bridge”; 1443–4), with its 164 arches, is a feat of early engineering. Sinan, the most famous Ottoman architect, probably gained engineering experience building temporary bridges for the army. The finest bridge of the Ottoman Empire, and the most elegant, is the 30-meter single arch built for Süleyman the Magnificent (built 1566; destr. 1993, rebuilt 2001–2) at Mostar, Bosnia.

Bridges in the Middle East were sometimes built on Roman or Sasanian foundations. The Sharistan Bridge, to the southeast of Isfahan, for example, is built on Sasanian piers. In Iran, brick was the common material of bridges, with stone foundations. By the 3rd century ce Roman methods had been applied to the needs of the hot, dry climate in Iran. By contrast, in the Ottoman lands, most permanent bridges were constructed of stone. New methods of bridge construction have been adopted in modern times. The first suspension bridge over the Bosporus at Istanbul (1973; span 1.07 km), for example, has an aerodynamic deck and zigzag steel cables.