Chinese performance artist, active also in the USA . Zhang studied art at Henan University and the Central Academy of Fine Arts in Beijing. In the early 1990s he moved to Da Shan Zi (also known as Beijing’s East Village), an area on the outskirts of the city inhabited by a community of artists and itinerant workers from all over the country. Along with his peers, Zhu Ming (b 1972) and Ma Liuming (b 1969), he began to stage performances that became a central part of the activities of the artist community. Zhang is considered one of the pre-eminent performance artists of his generation in China. 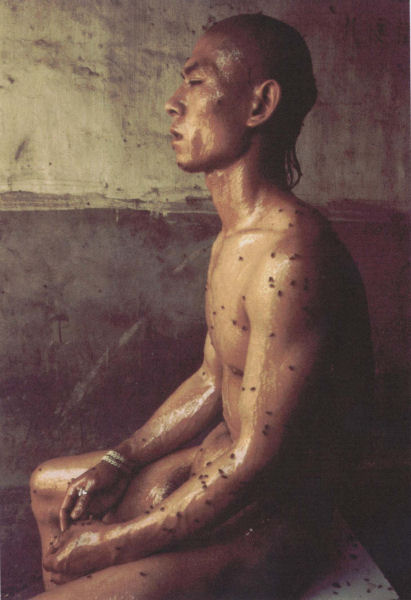 In the mid-1990s, performances such as 12 Square Metres (1994), 65KG (1994) and To Add One Meter to an Anonymous Mountain (1995) became synonymous with experimental art practice in China. In 12 Square Metres ( see also fig. ), Zhang sat naked in a dirty public toilet near his home for one hour. He covered his body with a sticky substance of honey mixed with fish oil, which attracted all manner of insects. Another work entitled 65KG , featured the artist chained to the ceiling of a building. He invited two hospital doctors to make incisions across his body so that blood dripped onto a hospital pan heated from below, burning his blood to create an unpleasant smell. A feeling of both discomfort and endurance characterizes these works.

After his participation in the exhibition Inside Out: New Chinese Art (1998), Zhang moved to New York. After emigrating to the USA, Zhang continued to stage performances, but they became increasingly international in their approach and philosophy, sometimes including large numbers of local residents. For example, My America: Hard to Acclimatise (1999), was a performance staged in Seattle, where the naked artist was surrounded by a group of naked volunteers who were given various instructions: to stand still, perform tai chi, or even pelt the artist with loaves of bread ( see fig. ). Although Zhang said that this performance was based on his initial reminiscences of settling in America, the end result was performance art on a grand scale. 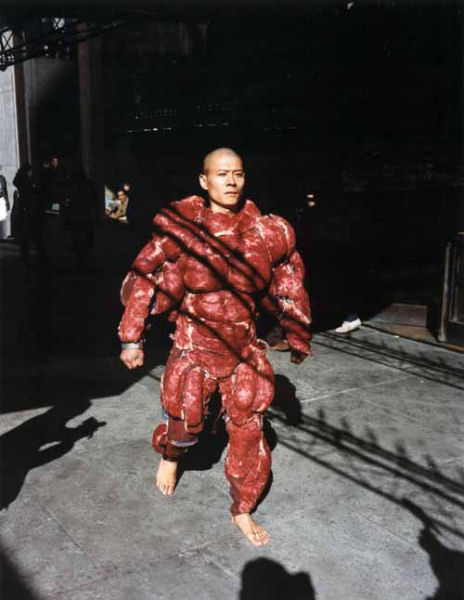 Zhang Huan: My New York, photo of performance in New York, 2002; photo courtesy of the artist

Other performance works using local volunteers include My Australia (2000), My Japan (2001), My New York (2002) and My Sydney (2004). Each performance responded to Zhang’s interpretation of current local events and issues. In My Australia, the artist appeared naked with a group of local volunteers whose poses mimicked the outdoor sculptures in the permanent collection of the National Gallery of Australia, Canberra. Zhang’s performances created a sense of spectacle that was both arresting and puzzling. They form a personal iconography that has evolved from endurance and mutilation (as seen in his works in China), to more involvement with the public.