American painter, architect, and diplomat. His importance lies in his historical paintings memorializing events in the American War of Independence. Applying Benjamin West’s and John Singleton Copley’s realistic innovations in history painting to American subjects, he created a series of images, reproduced in countless illustrations, that have become icons of American nationalism. They are also symbolic of his lifelong political and artistic identity.

Born into a well-to-do and politically prominent Connecticut family, Trumbull was the youngest child of Jonathan Trumbull, later Governor of Connecticut, and his wife Faith, a descendant of the Pilgrim leader John Robinson. Despite blindness in one eye (the result of a childhood accident), Trumbull was inclined from early boyhood towards art. His father intended that he prepare for one of the learned professions, either the ministry or the law, and in 1771 sent him to Harvard College. On his way to Cambridge, MA, Trumbull met Copley in Boston and was impressed by the artist’s personal elegance as well as by his paintings. At Harvard, Trumbull tutored himself in the fine arts both by studying the Copley portraits that hung there (he copied at least one, Rev. Edward Holyoke; untraced) and by reading extensively on the history, theory, and practice of art. He graduated in 1773 (the first American artist to be college educated) and returned home to Lebanon, CT, to take up painting. His early efforts were based on engravings, generally scenes of ancient Roman heroism (e.g. the Death of Paulus Aemilius at the Battle of Cannae, 1773; New Haven, CT, Yale U. A.G.). Trumbull’s father strongly opposed his artistic ambitions, considering a manual craft beneath the family’s station. When war with Britain broke out at Lexington, MA, on 19 April 1775, his father, by now governor, arranged for him to become an aide to General Joseph Spencer. In this capacity, Trumbull saw, from a distance, the Battle of Bunker Hill; it was the closest he came to any of the events he later depicted.

Following the British evacuation of Boston in March 1776, Trumbull moved to New York. His skill at drawing maps brought him to the attention of General George Washington and General Horatio Gates for whom he served briefly as aide-de-camp and adjutant-general respectively, attaining the rank of colonel. Always hypersensitive, he resigned from military service in 1777 when his expected commission did not arrive on time. He returned to Lebanon and resumed painting, mainly executing family portraits in the style of Copley (e.g. Governor and Mrs Jonathan Trumbull, Sr, 1778; Hartford, CT Hist. Soc.). Trumbull moved to Boston in June 1778, renting the former studio of the Scottish-born artist John Smibert. Since he could not study with Copley, who had gone to England, he taught himself by studying Smibert’s copies of Old Master paintings by Anthony van Dyck, Poussin, and Raphael, which had remained in the studio.

In 1780 Trumbull went to France on a speculative commercial venture for his family. The enterprise was unsuccessful and he continued on to England, where he sought out Benjamin West, who had become Painter of Historical Pictures to George III. West agreed to accept him as a pupil. Perhaps in retaliation for the execution in New York of Major John André as a British spy, or because he may have had a clandestine diplomatic mission, Trumbull was soon arrested as a spy and charged with treason. Thanks to West’s influence with the King, Trumbull’s life was spared but he was imprisoned for almost eight months and then deported. After hostilities ceased, he returned to London in January 1784 to resume his studies with West and to attend classes at the Royal Academy. 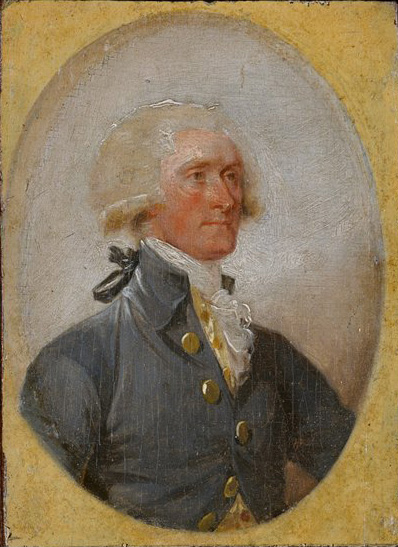 At West’s suggestion, and further encouraged by Thomas Jefferson, then American Minister in Paris, Trumbull began in 1785 what was to become his life’s great work—a series of paintings depicting events from the American War of Independence. (His original plan called for fourteen subjects, eight of which were completed.) By 1786 he had finished the first two, the Death of General Warren at the Battle of Bunker’s Hill (which West called the best picture of a modern battle that had been painted) and the Death of General Montgomery in the Attack on Quebec (both New Haven, CT, Yale U. A.G.), and shortly afterwards he started three other Revolutionary War battle scenes. West’s paintings served as theoretical and pictorial sources, while the active compositions, animated brushwork, rich colours, and dramatic lighting were derived from Copley’s Death of Major Peirson (1782–4; London, Tate). A high moral tone pervades the series: officers on opposing sides are shown to display courage, dignity, and kindness; and American history is raised to the level of timeless example. The best-known picture in the series is the Declaration of Independence (New Haven, CT, Yale U. A.G.), which Trumbull began in July 1786 in Paris, Jefferson having provided a first-hand account of the event. Jefferson, Benjamin Franklin, and John Adams were painted from life directly on to the canvas in 1787, but the majority of the likenesses in this and in the other history paintings were added from small pencil studies or miniature oil on mahogany panels made several years later (the largest number of studies is in the Yale University Art Gallery, New Haven, CT). These miniature portraits, such as Thomas Jefferson, show Trumbull’s talent at its best, the fluid brushstrokes and subtle glazes, spontaneity, and sensitive renderings of personality, a mark of his work during the 1790s. (For further illustration of Trumbull’s military pictures see Sortie Made by the Garrison of Gibraltar, 1789; New York, Met.)

In 1789 Trumbull returned to America, where he hoped to make his fortune from the sale of engravings after his history paintings, but he was able to sell few subscriptions. Discouraged, he ceased painting and in 1794 returned to Europe, where he remained for almost seven years, serving the new American government in various diplomatic and administrative posts. After his marriage to the Englishwoman Sarah Hope Harvey in 1800, Trumbull once again determined to paint for a living. In 1804 the Trumbulls moved to New York, where he soon became the city’s pre-eminent portrait painter. Despite his dislike of the ‘mere copying of faces’, portraits ultimately constituted the largest part of his oeuvre, the sitters being among the foremost political and cultural figures of New York society (e.g. Robert Lenox and Mrs Robert Lenox, both 1805; New York, Pub. Lib.). For the most part, these later works are uninspired. Trumbull had a short-lived interest in landscape, which led him to create a number of compositions whose structure anticipates the wilderness landscapes of the later Hudson River school (e.g. Falls of the Yantic at Norwich, c. 1806; Norwich, CT, Slater Mem. Mus.). Throughout his career he painted religious and literary subjects. During a stay in England (1808–16), prolonged because of the War of 1812, he produced a series of monumental subjects (e.g. Woman Taken in Adultery, 2.39×1.71 m, 1811; New Haven, CT, Yale U. A.G.), which show the influence of West’s late paintings.

On returning to New York, he was elected a director of the new American Academy of Fine Arts, and from 1817 to 1835 he served as its president, an important position that he used largely for his own advancement. He considered the commission of 1817 from Congress to paint four life-size Revolutionary War scenes for the Rotunda of the US Capitol in Washington, DC, to be his crowning achievement. He chose as subjects replicas of his original versions of the Declaration of Independence and the Surrender of Lord Cornwallis at Yorktown, October 19, 1781 (New Haven, Yale U. A.G.) and added the Resignation of General Washington, December 23, 1783, and the Surrender of General Burgoyne at Saratoga, October 16, 1777. The paintings were installed in the Rotunda in November 1826.

Trumbull’s art had a relatively limited impact on other artists. Despite his desire to be a mentor to younger artists, his increasingly intransigent ideas about artistic training alienated most younger members of the New York art world and resulted in the founding in 1826 of the National Academy of Design. By 1830 Trumbull received few commissions, and he was in poor health and difficult financial circumstances. Feeling unappreciated for his artistic contributions and concerned that the complete history series should find a permanent exhibition space, in 1831 he sold most of the works he possessed, including the Revolutionary War series, to Yale College in return for an annuity and the establishment there of a Trumbull Gallery, designed by himself with the help of architects Ithiel Town and Alexander Jackson Davis. Of his architecture, which included unexecuted plans for the expansion of Yale College, only the Meeting House in Lebanon, CT (1804–6), in an unadorned Neo-classical idiom, survives. At his death he was buried, as he had requested, beneath his life-size portrait of George Washington at the Battle of Trenton (1792; New Haven, CT, Yale U. A.G.) in the Trumbull Gallery. 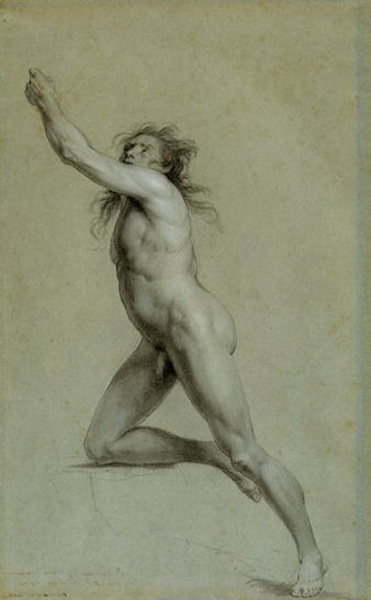