Cuban painter, ceramicist, and illustrator. Peláez studied under Leopoldo Romañach (1862–1951) at the Academia de San Alejandro in Havana, where she became interested in Impressionism. She graduated in 1924 and lived in Paris from 1927 to 1933, studying at the Académie de la Grande Chaumière, the Ecole Nationale Supérieure des Beaux-Arts, and the Ecole du Louvre. She also studied composition and color, as well as manuscript illustration, with the Russian Constructivist and stage designer Alexandra Exter. While in Paris, Peláez held an individual exhibition at the Galerie Zak in Paris in 1933 and in 1934 returned to Cuba. During these years Peláez illustrated various literary manuscripts, including Léon-Paul Fargue’s Sept poèmes (1933; unpubd.), Luis Amado Blanco’s Poema desesperado (1937), and her uncle Julián del Casal’s La agonía de Petronio (1937, unpubd.). Peláez is celebrated in Cuba and in the world of Latin American art for the stylistically innovative still lifes set in Spanish colonial domestic interiors that she developed in Havana during the 1930s and 1940s. During the 1950s, Peláez was a pioneering ceramicist in Cuba (see Cuba, fig.). She created several important murals in Havana at this time, including untitled ceramic murals at the Tribunal de Cuentas (1953) and the Havana Hilton (1957–1958). 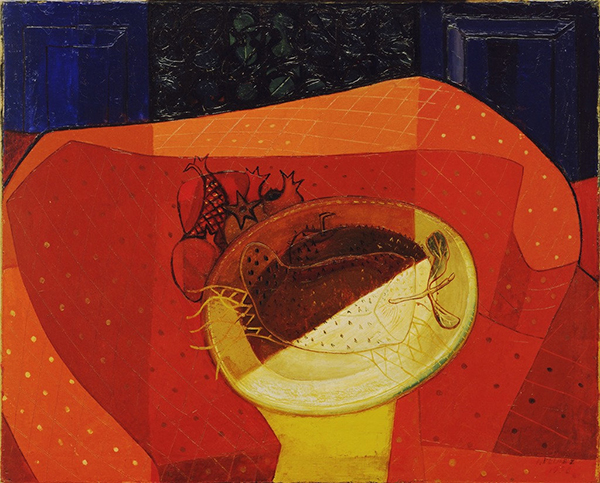 After her 1934 return to Cuba, Peláez animated multi-perspectival, Cubist still lifes of tropical fruit with swirling Futurist movement and the vibrant color contrasts of Exter’s unique take on Constructivism. Shortly thereafter (mid-1930s) she began to experiment with the patterns, shapes, and geometric relationships of the tablecloths and fruit dishes populating her still lifes, thereby laying the groundwork for the geometric constructions and rhythmic patterns that have been associated with her architectural ornamentation of the 1940s (e.g. Still-life in Red (1938; New York, MOMA)).

Peláez’s work is considered at the forefront of thematic and aesthetic shifts in the avant-garde expression of Cuban national identity. She departed from avant-garde preferences in the 1920s and 1930s for Afro-Cuban and guajiro (peasant) subjects as well as the wholesale adoption of modern European styles.

Since the 1940s, art critics have defined her domestic colonial interiors as “Baroque.” The first critic to apply this term to Peláez’s painting was a Swiss resident artist and critic, Robert Altmann. In 1945, writing in the Havana journal Orígenes, Altmann argued that Peláez’s ornament had a formal relationship to the Baroque decorative patterns that persisted in Cuba’s 19th-century domestic architecture, despite the prevailing neoclassicism of this period. Some art historians have subsequently attributed the form and colors of Peláez’s work in the 1940s to the ornament and stained glass of Cuba’s colonial architecture and consequently labeled this Baroque. Others have argued that the layering, accumulation, and multiplicity of her ornament, as well as the sensuality of her gesture, justified the Baroque label. Certainly the eroticism of the fruit and fish at the heart of her still lifes suggest a link to ecstasy, a key theme of the Italian Baroque.

Peláez’s work was part of a broader interest in the Spanish colonial past that permeated other sectors of Cuban cultural life at the time, including new architectural histories, building restoration projects, and literary themes. Thus her architectural motifs have been understood to engage tensions between past and present, tradition, and modernity. Some argue that her works are nostalgic, others that they were reflective of her contemporary moment. Indeed, her traditional domestic settings and her contemporary artistic languages, whose sexual expression often transgress taboos for the women who would have inhabited such traditional spaces in the past, speak to changing norms in Cuban society.