Dutch painter, architect, designer and writer. He was officially registered as the son of Wilhelm Küpper and Henrietta Catharina Margadant, but he was so convinced that his mother’s second husband, Theodorus Doesburg, was his father that he took his name. Little is known of his early life, but he began painting naturalistic subjects c. 1899. In 1903 he began his military service, and around the same time he met his first wife, Agnita Feis, a Theosophist and poet. Between about 1908 and 1910, much influenced by the work of Honoré Daumier, he produced caricatures, some of which were later published in his first book De maskers af! (1916). Also during this period he painted some Impressionist-inspired landscapes and portraits in the manner of George Hendrik Breitner. Between 1914 and 1915 the influence of Kandinsky became clear in such drawings as Streetmusic I and Streetmusic II (The Hague, Rijksdienst Beeld. Kst) and other abstract works.

With the mobilization of the Dutch forces following the outbreak of World War I, van Doesburg was sent to Tilburg near the Belgian front. His first marriage was already in difficulty, and in Tilburg he met Lena Milius, who became his second wife (1917). In 1915 he met the painter Janus de Winter, who became the subject of a second pamphlet by van Doesburg. De Winter was a mystic and Theosophist who worked mainly in watercolours and pastels. His influence can be seen in van Doesburg’s expressive and highly charged pastels and self-portraits of this period including Despair (1915; The Hague, Rijksdienst Beeld. Kst). Also in 1915 he discovered the work of Piet (er Cornelis) Mondrian, whose ‘spirituality’ was of an entirely different order from that of De Winter. Almost immediately he began to contemplate and organize a new periodical, De stijl: Maandblad voor nieuwe kunst, wetenschap en kultuur, not to be fully realized for another two years. In the meantime he wrote a considerable amount, including a good deal of criticism.

In 1916 van Doesburg participated in the foundation of the artists’ associations De Anderen and De Sphinx. Although his enthusiasm for these was short-lived, he met other like-minded artists, including Bart van der Leck, and even such architects as J. J. P. Oud, all of whom became actively engaged in De stijl. In August 1916 Oud commissioned him to design a stained-glass window for a house he was building in Broek-in-Waterland. This commission was followed by numerous others in stained glass, a medium that provided an opening into architectural design and a fruitful area for the further exploration of important themes. These included reduction of natural appearances into simplified geometric forms and the development of an art based on mathematical principles, ideas that van Doesburg thought the Cubists had been attempting. He produced series of drawings from a single subject where the heavy, emphatic outline was progressively ‘essentialized’ to a minimum of horizontal and vertical lines bounding coloured planes. This technique of painterly composition lent itself admirably to the creation of stained-glass windows. The windows were usually designed for specific buildings for which van Doesburg would also produce colour-schemes and even tiled floors, in which he would continue to elaborate his compositional principles (e.g. his collaborative work in 1917 with Oud at the Vakantiehuis De Vonk, Noordwijkerhout, illustrated in De stijl, Nov 1918; and with Gerrit Rietveld in a room for Bart de Ligt, 1919, illustrated in De stijl, 1920). He acted as colour consultant for the De Lange House (1917), Alkmaar, by Jan Wils, and the Hotel De Dubbele Sleutel (1918; destr. 1975), Woerden.

From as early as 1912 van Doesburg had published an impressive number of articles. He signed his work under various names, including I. K. Bonset (in his role as a Dadaist poet) and Aldo Camini (in his role as a Futurist), as well as his own. In his writings on art he revealed himself to be a very self-conscious artist, who engaged in a constant dialogue between theory and practice, and between his work in painting and in architecture, also exploring the relationship of his work to that of others. During 1917 discussion continued concerning the naming of official collaborators of De stijl. The first issue was dated October and appeared in November 1917 (see Stijl, De).

In 1920 and 1921 van Doesburg undertook work in Drachten for the architect Cornelis de Boer. Van Doesburg’s colour-schemes (produced for a block of middle-class housing and for an agricultural school across the street) linked interior with exterior, and the primary colours on the housing had their counterpoint in the secondary colours of the agricultural school.

While working on these colour-schemes he also became increasingly involved in Dada activities, including the publication of four issues of Mécano (1922–3), attending a Constructivist/Dadaist Congress in Weimar in September 1922 (with Tristan Tzara, Hans Arp, Kurt Schwitters, Hans Richter, Hannah Höch and others), and participating in performances in Hannover and Weimar and a Dada tour of the Netherlands to commemorate his final departure from his native land.

Through these activities and through his editorship of De stijl, van Doesburg gradually developed international contacts. At the end of 1920 he visited the Bauhaus; there has been some speculation that he was to have been appointed to the staff. On a second extended visit in May 1922, he gave his controversial De Stijl course to Bauhaus students at his studio in Weimar. There he met the young Dutch architect Cornelis van Eesteren, whose interest in De Stijl ideas resulted in collaborative projects that formed the centrepiece for the great exhibition Les Architectures du Stijl at Léonce Rosenberg’s Galerie de l’Effort Moderne in Paris in 1923. Rosenberg had commissioned van Doesburg and other members of De Stijl to design an ‘ideal house’ for him as early as December 1920. In response to this earlier request van Eesteren designed a house for Rosenberg in late 1922. The designs were sent in early 1923 to Gerrit Rietveld who built the model. A second model for a ‘maison particulière’ was designed by van Eesteren with a colour-scheme by van Doesburg, and a third model for a ‘maison d’artiste’ was designed principally by van Doesburg. This third model and Rietveld’s Schröder House (1924) are two of the prime examples of Elementarist architecture (see Elementarism). There has long been a dispute over the precise contributions of van Doesburg and van Eesteren to the second and third models, and the dispute over attribution caused the split in their partnership at the end of 1924.

Despite van Doesburg’s efforts, De Stijl was not given its own pavilion at the Exposition des Arts Décoratifs et Industriels Modernes (1925) in Paris. Although disappointed, he made a considerable breakthrough in his painting and architecture c. the end of 1924. Having previously concentrated on a format that included only horizontal and vertical elements he reintroduced the diagonal into his paintings, subsequently giving them the titles ‘counter-compositions’; these form an interesting comparison with Mondrian’s lozenge paintings of the following year, although it was the emphasis that van Doesburg gave to the diagonal that caused a split between the two (see fig.). In producing a ‘Flower Room’ for Charles, Vicomte de Noailles, van Doesburg used the ‘counter-compositional’ technique to create a dynamic tension between the upright architectural structure and the diagonal emphasis of the colour-scheme. This theme was continued in works of the next few years, most notably between 1926 and 1928 when he collaborated with Hans Arp and Sophie Taeuber-Arp on the renovation of the Café de l’Aubette, an entertainment complex in Strasbourg. Van Doesburg himself designed the major rooms, including the Café-Brasserie, the Petite Salle-Dancing and the Ciné-Dancing. These last two rooms were designed in contrast to one another: the former with horizontal–vertical compositions in primary colours; the latter with diagonal compositions closely resembling his painting Counter-composition XVI (1925; The Hague, Gemeentemus.). In his article ‘Schilderkunst: Van compositie tot contra-compositie’ he explained the theory behind these works. 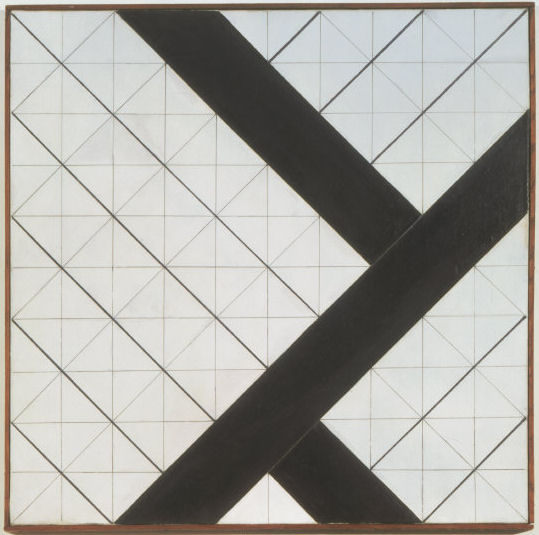 From 1925 van Doesburg intended to build a studio-house for himself and his third wife, Nelly van Moorsel. It was to have been a double house to accommodate themselves and the Arps, but after a number of designs were explored, the Arps withdrew, and van Doesburg produced his first architectural work free from collaboration with other architects. It marked his transition from painter to architect. Unfortunately, before the house was finished, he died of a heart attack following a bout of asthma. Shortly before his death he published his first and only issue of Art concret (see Concrete art) and was involved in planning a new group of artists, the emergent Abstraction–Création, which was to have been based at van Doesburg’s Studio-House in Meudon.

For further writings and bibliography see Stijl, De and Elementarism.