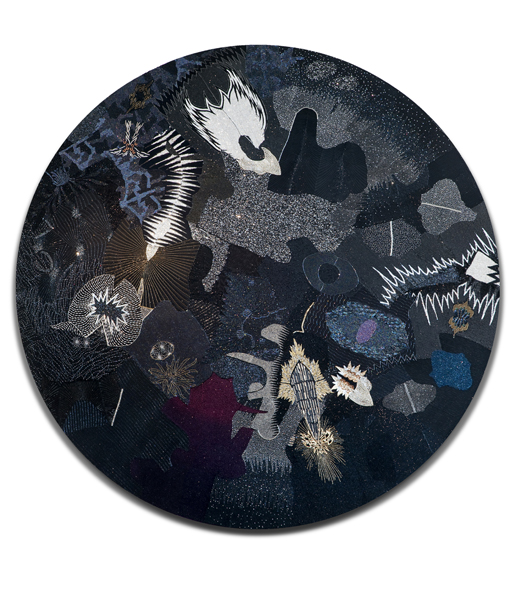 American sculptor and multimedia artist working in fibre, installation, video, and performance. The youngest of seven sons born into a central Missouri family, Cave demonstrated an early acumen with hand-made objects and throughout his career has created works out of texturally rich materials imbued with cultural meaning. Cave received his BFA (1982) from the Kansas City Art Institute, developing an interest in textiles and, after some graduate-level work at North Texas State University, received his MFA (1989) from the Cranbrook Academy of Art, renowned for their textile, fibre art, and design programmes. While working toward his art degrees, Cave simultaneously studied with the Alvin Ailey Dance Theater, a company known for introducing African American folk traditions into the modern dance vocabulary. Cave moved to Chicago where he became chair of the Department of Fashion Design at the School of the Art Institute in 1980.

Working across the disciplines of sculpture, textile, dance, and cultural performance, Cave’s oeuvre is based on the human figure; he has produced wearable art as sculptures, arrangements of human and animal figurines as installations, and performance works. Cave’s signature works, the multi-sensory ‘Soundsuits’, are full-body costumes consisting of unexpected materials ranging from humble woven rugs, synthetic hair, or buttons to shimmering sequins and paillettes in a contemporary variation on Rococo opulence. Cave’s first Soundsuit was created in 1992 (shortly after the vicious beating in Los Angeles of Rodney King, a black parolee, by white police officers and subsequent riots) when the artist, feeling vulnerable, instinctively created an ersatz body armour from tree twigs littering the ground. When worn, the suit made a rustling sound. Since then, the Soundsuits have taken inspiration from references as broad as ecclesiastical mitres, carnival costumes, Dogon masks, fashion, theatre, and Queer ball culture. Each Soundsuit has been designed around and worn by Cave, who has improvised a series of movements for the wearable sculptures, which, in turn, generate sounds such as a swish or percussive rhythm. Soundsuits often appear as Surrealist objects in choreographed performances.

Cave also has created static objects based on found-object or textile traditions. Cave’s sculpture and installation works often incorporate ceramic decorative implements from pre-war American decorative history. On the one hand, the appropriated animal figurines and bejewelled topiaries evoke an innocent era but, on the other, they grow sinister when juxtaposed with other found objects that Cave calls ‘Relics’ – antique pieces with derogatory depictions of African Americans such as lawn jockeys and ‘Mammy’ figures. The ‘Tondos’, circular tapestry works, readily hearken to Cave’s textile training and, like the Soundsuits, have lush, patterned surfaces. Unlike the Soundsuits, the Tondos tend toward abstraction and irregular patterning yet conjure astrological charts of the night sky.

All of Cave’s works take on a performative element, fostering a visual and bodily relationship with the viewer, oftentimes encouraging audience participation. Cave has argued that his approach – using found materials, alluding to the domestic sphere via craft traditions, and borrowing from popular cultural activities – is equally ethical and aesthetic. Utilizing craft in the fine arts elevates culturally devalued objects while also creating works that invite audiences into discourses about the decorative arts and displays of identity and power. Cave’s practice extends a tradition of significant post-World War II movements – such as Gutai, Aktionism, and Arte Povera – which valued audience participation, utilized unconventional art objects, and introduced performing arts, such as music and dance, into the vocabulary of fine art.