French critic and philosopher Nicolas Bourriaud adopted the term ‘relational aesthetics’ in the mid-1990s to refer to the work of a selected group of artists, and what he considers their novel approach to a socially conscious art of participation: an art that takes as its content the human relations elicited by the artwork. Its key practitioners, most of them emerging in the 1990s, include Rirkrit Tiravanija , Philippe Parreno (b 1964), Liam Gillick, Pierre Huyghe, Maurizio Cattelan, Carsten Höller , and Vanessa Beecroft . For example, Carsten Höller installed Test Site (2006) at the Tate Modern in London so that visitors could enjoy the amusement park thrill of large playground slides in the museum’s Turbine Hall, and bond with fellow viewers over their experience. Bourriaud’s collected writings in Relational Aesthetics (1998, Eng. edn 2002) helped to spark a new wave of interest in participatory art.

While Bourriaud omits acknowledging the historical roots of relational art, Marxist-influenced critiques of the changing conditions of modern life, and arguments for art’s ability to improve man’s relationship with reality have a long history in 20th-century art. Critics Walter Benjamin and Siegfried Kracauer were among the first to developed new models for an art of politicized participation in the 1920s. The relational art of the 1990s and early 2000s is a continuation and an extension of traditions of participatory art throughout the 20th century (such as Constructivism, Kinetic art , Neo-Concrete art, the legacy of composer John Cage for the arts of the 1950s and 1960s, happenings, Fluxus , and Conceptual art ). As a scholarly rubric in modern art, participatory art became especially significant in the context of kinetic and Op art . Popular in the 1950s and 1960s, these practices elicited physical interaction from the viewer in order to be ‘completed’. For instance, the Penetrables (1967–97) by Venezuelan kinetic artist Jesús Soto are room-sized installations of dense rows of coloured plastic or metal rods that heighten the viewer’s sensory experience of the site as he moves through it. Participatory practices seek to alter the viewer’s experience of space and time, to allow the viewer to ‘change’ the work, or sometimes both. In Chair Event (1961), American Fluxus artist George Brecht provided three chairs in the exhibition space for viewers to sit on. Most 20th-century participatory artworks promote an understanding of lived experience in which meaning is ‘open-ended’, as opposed to a more traditional art experience of interpreting an object’s predetermined meaning. 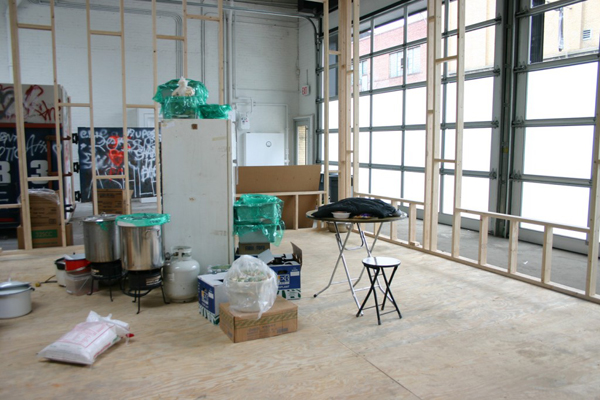 All art is potentially participatory, if viewers are willing to engage with the work. However, in Bourriaud’s formulation, not all participatory art is relational. A relational work, for Bourriaud, does not aim at a critique of the art institution or an expansion of the definition of art, but rather focuses on the social interactions sparked by the art exhibition. For example, in Untitled 1992 (Free) of 1992–2007, first presented at 303 Gallery in New York, Rirkrit Tiravanija moved what he found in the office and storage room into the exhibition space, reversing the relationship between public and private; he invited the director and his assistants to work there, and then cooked Thai curry in the office for everybody in attendance.

For Bourriaud, the relational artist is a social engineer, who establishes ‘situations’ to be used, rather than objects to contemplated. As a ‘social interstice’ (a concept Bourriaud borrows from Karl Marx), the site of the exhibition holds an important liberatory promise. As the art world operates partially independent of market logic and the mechanization of experience, social connections severed and lost in a post-industrialized society (most recently, affected by the internet) can be created anew in the space of the exhibition. A relational aesthetic garners a ‘hands-on utopia’ that focuses on re-engineering the viewer’s experience of the present moment, rather than promoting social aspirations toward a better future. Intersubjectivity and conviviality are Bourriaud’s two key concepts. He argues that we should not judge the physical manifestation of a relational work aesthetically, but only its ‘formation’ of intersubjective interchange between people (that is, the work’s social effects are more important than its appearance). He believes these situations of conviviality to be fundamentally democratic because the work ‘activates’ the viewer and levels the playing field between various participants in the piece, including the viewer, gallery director, collector, and the artist himself. Scholar Claire Bishop asked succinctly in 2004, ‘what types of social relations are being produced, for whom, and why?’, pointing to an important critical lacuna in Bourriaud’s theory by questioning on what terms relational art should be evaluated.