Spolia in medieval art and architecture

In its most general sense, spolia (pl., from Lat. spolium: ‘plunder’) denotes all artifacts re-employed in secondary contexts, from building blocks reused in a wall to pagan gems mounted on a Christian reliquary. It is a matter of debate whether this broad application of the term is justified, or whether it should be restricted to the relatively small subset of reused objects that were taken or ‘stripped’ (like spoils) from their original context, rather than found, purchased, inherited or otherwise acquired by non-violent means. It is likewise debated when the use of spolia should be considered meaningful, if at all. Arnold Esch defined five possible motives for using spolia: convenience, profanation, Christianization, political legitimation and aesthetic attraction. Michael Greenhalgh has argued for reducing the motives to three (at least with regard to marble): pragmatism, aesthetics and ideology; while Finbarr Barry Flood cautioned against reductive interpretations generated by any taxonomy, insisting that reused objects are mutable in meaning and capable of multiple interpretations during their life cycle.

Roman law explicitly prohibited spoliation, defined as the removal of marble and other ornaments from public buildings for reuse on private structures or in other cities. Constantine’s ‘denuding’ of cities by expropriating their statues and other monuments in order to embellish Constantinople (before ad 330) was a spectacular breach of custom in this respect. The closure of pagan temples in 391, however, created an inventory of abandoned marble structures ready for pillage, and lack of adequate maintenance also caused secular buildings (baths, porticos, theatres) in Roman cities to decay. By the 6th century, their columns and other marble ornaments were considered valuable antiques, and recovering them for reuse in new buildings a form of renovation. This attitude was codified in Italy by King Theodoric (reg 489–526), who explicitly permitted the alienation of ornament from public property and also transferred marbles from ruined sites in Rome to his residence in Ravenna. Charlemagne (reg 768–814) may have been following Theodoric’s example when he had columns and marble brought from Rome and Ravenna to his churches in Aachen and elsewhere, but by then it was already established practice to acquire such trophy ornaments for churches, whether by digging for them in the ruins of Roman cities in England and Francia (the Frankish kingdom) or transporting them from Rome itself. The trophy phase peaked in the 11th and 12th centuries, but as late as 1283 Abbot Richard de Ware was memorialized for having ‘carried stones from Rome’ to Westminster. The ‘stones’ of Rome—white and coloured marbles, and porphyry—conferred an aura of antiquity upon new buildings and associated their sponsors with the authority and legendary splendour of the past.

The reuse of durable building materials—marble, brick, roof tiles etc.—became less frequent in northern Europe after the 11th century as Romanesque and especially Gothic styles mandated that elevations be made entirely of stone blocks newly cut to particular specifications. In Rome and other parts of Italy, however, the recycling of marble ornament—including column shafts, capitals, bases, moulded entablatures and doorframes—continued into the 14th century, and it is also seen in the hypostyle mosques of Spain, North Africa, Egypt and Syria. Reuse of this type may have signified continuity with or emulation of the local high culture, or, in the later medieval West, the aspiration to revive the legacy of ancient Rome. True spolia—materials or objects taken violently from an opponent—were different and were usually displayed as such, as seen in such cases as the marble revetment from a Temple of Zeus that was reused as paving stones outside the 5th-century Cathedral of Gaza, ‘so that they might be trodden on’ (Mango, p. 31); the captured Islamic objects mounted on cathedrals in Spain and Italy in the 12th–13th centuries; and the ornaments from Constantinople displayedon the façade of S Marco in Venice after 1204. 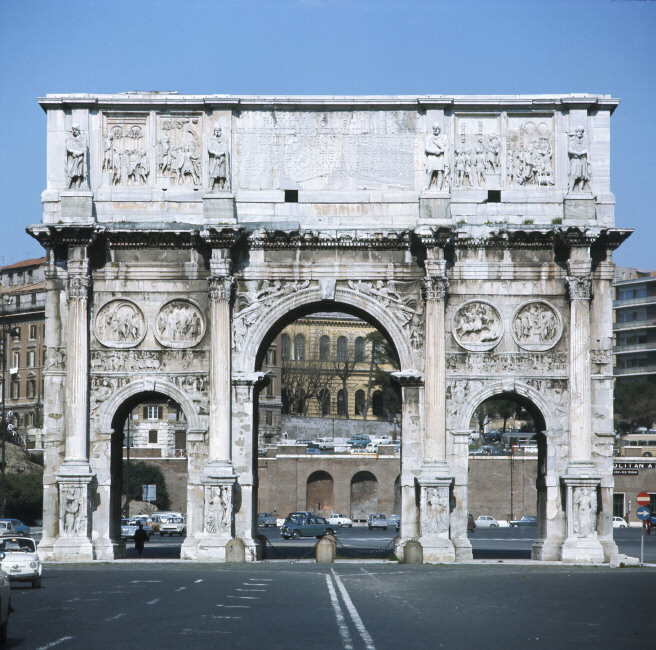 Figural spolia encourage programmatic interpretations, but such readings may be overly influenced by modern ideas of iconology. The Arch of Constantine (312–15) in Rome, displaying relief images made for 2nd-century (‘good’) emperors recut with 4th-century portraits, is generally considered the paradigm of programmatic reuse, but recent scholarship is sceptical. Similarly it is uncertain whether the ancient pagan cameos used to adorn altar crosses, reliquaries, Gospel Books and other liturgical objects after about 1000 in the West were given Christian allegorical interpretations, or whether their non-Christian imagery was ignored in favour of their spectacular materials. Like the pre-Islamic carvings of animals displayed on mosques in Egypt and Syria, the gems may have been considered apotropaic.