Astrology is the art of predicting events on earth as well as human character and disposition from the movements of the planets and fixed stars. Medieval astrology encompassed both general concepts of celestial influence, and the technical art of making predictions with horoscopes, symbolic maps of the heavens at particular moments and places constructed from astronomical information. The scientific foundations of the art were developed in ancient Greece, largely lost in early medieval Europe and recovered by the Latin West from Arabic sources in the 12th and 13th centuries. Late medieval astrological images were successfully Christianized and were adapted to particular contexts, acquired local meanings and changed over time.

Astrology developed into a scientific branch of learning in ancient Greece, but because of the opposition of the Church Fathers it was transmitted to early medieval Europe in only fragmentary form in technically unsophisticated textbooks and popular divinatory genres. Literary and scientific texts provided more general ideas about the nature and attributes of the planets which were influential on later iconography. The first significant astrological images appear in 11th-century illustrated astronomical texts (e.g. London, BL, Cotton MS. Tiberius BV), which were acquired and produced by monasteries to aid with time-keeping and the construction of the Christian calendar.

In the 12th and 13th centuries, Arabic translations of Greek works of astronomy (e.g. Ptolemy’s Almagest) and astrology (e.g. Ptolemy’s Quadripartitum), as well as Arabic texts and commentaries (e.g. works by Abu Ma’shar [Albumasar] and Al-Qabisi [Alcabitius]) and astronomical tables, were translated into Latin. These texts provided theories of celestial influence, systematic rules for interpreting planetary configurations and the skills to construct more accurate horoscopes. Images from Classical and Arabic sources were adapted to the Christian world view. Although personifications of the planets usually retained their Classical attributes, such as the Sun’s regal orb or the sickle wielded by Saturn, the planetary rulers and mythical figures (pagan gods) tended to be kept separate in medieval literary texts, enabling astrological images to avoid the taint of paganism. Some medieval Christian traditions of astrological iconography linked the planets closely to medieval preoccupations, representing them as king, bishop, knight, scholar etc. Astrological images could even be assigned a specifically Christian dimension. In Christine de Pizan’s Epistre Othéa (1399–1400) the descriptions and images of the planets and their followers illustrate the virtues and vices that a good knight should possess or avoid. 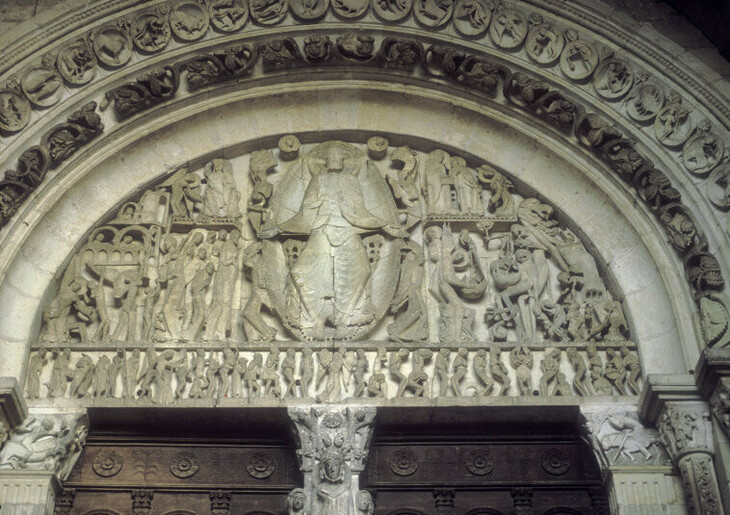 Astrological images became part of the widely disseminated Christian iconography of time, with the planets linked to the hours and days of the week and the zodiac signs to the twelve months. In manuscripts (such as Book of Hours), sculptures and mosaics with these astrological motifs became religious symbols which conveyed the order and harmony of the cycle of life. Zodiac signs could point to time’s end as well as to its divisions and progression, for example, when sculpted on the archivolts of tympanums depicting the Last Judgement, as they are at the Cathedrals of Autun and Chartres.

Astrological images also articulated a model of the cosmos in which men and women were subject to celestial influences. Medical diagrams associated zodiac signs with parts of the body (the zodiac man) and the planets with internal organs (the planetary man; see also Medical illustrated books, §1). These illustrations reminded physicians of appropriate times to bleed a patient and served as vivid advertisements of the physician’s knowledge of the Heavens.

Political legitimacy was reinforced by astrological iconography, from the incorporation of astrological images into the painting and sculptural programmes of the great halls and churches of the city states of northern Italy to the adoption of the emblem of the Sun King by the rulers of medieval France. Astrological images were flexible to particular political agendas and evolved over time to suit different contexts and audiences. Two new iconographic interpretations of the planets emerged in the 15th century, which in one case drew them further into Christianized personification and, in the other, strengthened the association between myth and astrology. In the first, they were portrayed as mounted knights holding banners, and in the second they were represented driving chariots harnessed with animals and birds. The 15th century also saw the successful popularization of astrology through the dissemination of the pictorial genre of the ‘children of the planets’ in the new artistic medium of the woodcut. This consisted of images of each planet together with the people, activities and sports particularly associated with it.

Medieval astrology complemented ideas of celestial influence in the Aristotelian geocentric universe. Astrological practice and iconography would become vulnerable to the undermining of this cosmological model in the 16th century.