Italian painter, architect and stage designer. His father Tommaso (fl 1503–23) was a painter and decorator at the court of the Este in Ferrara, and Girolamo was trained in the workshop of Garofalo. He visited Rome in the early 1520s (Fioravanti Baraldi) and in 1525 was in Bologna, where he worked with Biagio Pupini and Giovanni Borghese on the decoration of the sacristy of S Michele in Bosco. Around this time (1525) he painted the altarpiece of the Virgin Enthroned with Saints (Dresden, Gemäldegal. Alte Meister; destr.) for S Biagio in Bologna. 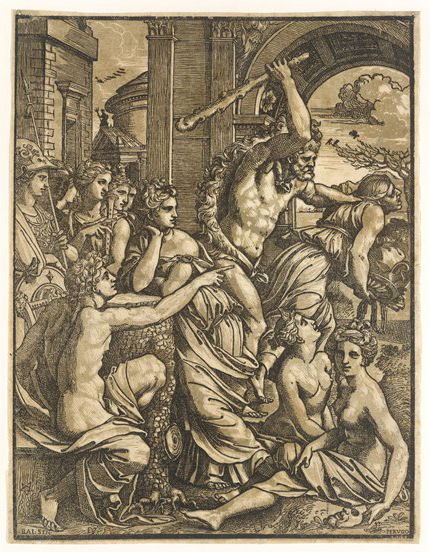 From these early works onwards, da Carpi developed a pictorial language that combined the Ferrarese models of Garofalo and Dosso Dossi with the influence of such works by Raphael as the St Cecilia (Bologna, Pin. N.), which he saw in Bologna, the Madonna of Foligno (Rome, Pin. Vaticana) and the frescoes in the loggia of the Villa Farnesina in Rome. Da Carpi’s Adoration of the Magi (c. 1528; Modena, Gal. & Mus. Estense) shows the influence of the cartoon (London, N.G.) on the same subject executed in Bologna c. 1523 by Baldassare Peruzzi for Conte Giovan Battista Bentivoglio. In 1530 da Carpi was again in Ferrara, where he worked with his father on the decoration of the cupola (destr.) and friezes in the nave of S Francesco. Some of the ideas in his SS Catherine and Ursula in S Francesco were clearly suggested by his meeting with Parmigianino in Bologna, c. 1527–30. Parmigianino’s influence is strong also in the Adoration of the Magi (c. 1532; Bologna, S Martino), the Mystic Marriage of St Catherine (c. 1534; Bologna, S Salvatore) and the later St Jerome (Ferrara, S Paolo). In these works he combined the inspiration of Parmigianino with a monumental style derived from Giulio Romano.

Parmigianino’s influence proved fundamental also for da Carpi’s portrait painting, a field in which he was very active, according to Vasari. Important examples include the portraits of Onofrio Bartolini Salimbeni (1528–9; Florence, Pitti), Cardinal Ippolito de’ Medici and Monsignor Mario Bracci (1532–3; London, N.G.) and Girolamo de’ Vincenti (1535; Naples, Capodimonte). Between 1531 and 1537 da Carpi settled in Ferrara, although he maintained close relations with patrons in Bologna. Around 1532–3, for S Francesco, Ferrara, he painted the altarpiece of the Apparition of the Virgin (Washington, DC, N.G.A.), which includes a portrait of the donor, Giulia Muzzarelli. This was his most mature work, in which he profited from his youthful study of Titian and Giulio Romano and his keen interest in the art of Correggio, which he saw in Modena and Parma (Vasari).

From 1536 da Carpi’s relations with the Este court intensified. In 1537 his name first appeared in the accounts for frescoes painted (1537–41) in the Sala delle Vigne in the Este villa at Belriguardo (nr Ferrara), where he worked with Garofalo, Dossi, Camillo Filippi (see Filippi family §(1)) and others. In this period he also worked on the construction of the Palazzo Naselli Crispi in Ferrara and on the decoration of other Este buildings including the Palazzo della ‘Montagna di Sotto’ or Montagnola (1541; destr.) and the villa at Copparo (1545), near Ferrara. In addition he created the sets for the tragedy Orbecche (1541) and the pastoral fable Egle (1545), both written by the humanist Giovan Battista Giraldi Cinzio. During the same years he painted several works on allegorical and mythological themes for Ercole II d’Este, including Opportunity and Repentance (1541), Ganimede (1541) and the Venus on the Eridano (1546; all Dresden, Gemäldegal. Alte Meister) for the ‘camera del poggiolo’ in the Castello Estense.

In 1549 da Carpi was called to Rome by Cardinal Ippolito II d’Este to work on the excavation of Hadrian’s Villa at Tivoli and the arrangement of the gardens of the palace at Monte Cavallo, on the Quirinal Hill in Rome. His interest in antiquity is attested by his drawings (London, BM; Philadelphia, PA, Rosenbach Mus.; Turin, Bib. Reale). In 1550 he entered the service of Pope Julius III as architect in charge of modifications to the Villa Belvedere in the Vatican. After his return to Ferrara in 1553, he worked on the reconstruction of the Castello Estense, which was damaged by fire in 1554.