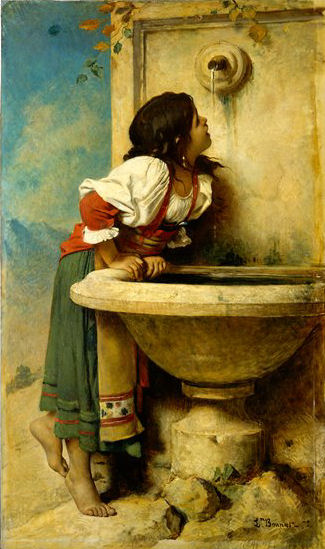 French painter, collector and teacher. He lived in Madrid from 1846 to 1853, where his father owned a bookshop, and there he studied with both José de Madrazo y Agudo and Federico de Madrazo y Küntz. After moving to Paris in 1854, he entered Léon Cogniet’s atelier at the Ecole des Beaux-Arts and competed for the Prix de Rome in 1854, 1855 and 1857. He won second prize in 1857 with the Resurrection of Lazarus (Bayonne, Mus. Bonnat), a painting characterized by the jury as frank, firm and powerful, terms applied to his art throughout his career. His early paintings of historical and religious subjects gave way in the late 1860s to the less esteemed field of genre—scenes of Italian life and the Near East—based on sketches made during visits to Italy (1858–60; see fig.) and the Near East and Greece (1868–70).

Bonnat’s final change of career occurred in the mid- to late 1870s, when he became internationally renowned for his portraits, particularly of members of the European and American establishment. His highly realistic technique reflected his frequent use of photographs as models. The portraits, which cost 30,000 francs each, were so desirable that by the 1880s he had to schedule three to four sittings a day to accommodate his long waiting list.

Bonnat’s portraits followed a pattern set by the monumental and elegant Mme Pasca (1874; Paris, Mus. d’Orsay), his first painting to be universally praised. His actress friend dominates a dark, amorphous space and is brightly lit to create a strong chiaroscuro effect. Bonnat’s style was strongly influenced by Ribera and the portraits by Titian, Velázquez and van Dyck that he saw as a youth in the Museo del Prado in Madrid. In addition he owed a debt to Rembrandt, Courbet and Manet, the last of whom also loved Spanish painting, a fact that may account for Bonnat’s support for Manet’s Salon entries. Bonnat’s portrait of Adolphe Thiers (1876; Paris, Mus. d’Orsay), the first President of the Third Republic, established his fame. The portrait is serious and formal, full of the strength and dignity the audience expected of this contemporary hero. Bonnat adapted a pose from Titian’s Charles V (Madrid, Prado), one of the first paintings to establish the pattern for state portraiture, which has been dominant ever since. His dour, stiff, implacable Thiers, portrayed as a confident national leader, became a model for every establishment figure desiring a portrait. Bonnat’s approach in this and the innumerable portraits that followed distinguished him from his rival portrait painters, Carolus-Duran, John Singer Sargent and Jules Lefebvre.

Bonnat’s work has a wide expressive range, though almost all his portraits flatter the sitters. Portraits of his close friends are full of energy and life (e.g. Harpignies, 1889; Paris, Petit Pal.). However, several portraits are dull and vapid (e.g. Leland Stanford jr, 1884; Stanford, CA, U. A.G. & Mus.), a result in part of the speed with which he worked to fulfil his many commissions. Contemporary critics mentioned that Bonnat’s portraits of public officials enhanced their dignity, and in most of his portraits the subjects appear younger and more animated than in their contemporary photographs. The stiffness of many of the portrait figures reflects the cold, inexpressive public image that most 19th-century patrons cultivated. By generalizing the setting and minimizing attributes, features that might indicate profession or character, Bonnat diminished the personality of his sitters while emphasizing the idea of the importance of the individual. They form a telling document of a triumphant bourgeoisie, produced in a period when the focus on great individuals was yielding to the idea that broad social and economic forces were the significant factors shaping the world.

Bonnat was an important teacher and ran an active studio for over 30 years. In addition to supervising an independent studio from 1865, he taught the evening course at the Ecole des Beaux-Arts in Paris from 1883 until he became a chef d’atelier at the same institution in 1888, a post he held until he became Director in 1905. His best-known students included Thomas Eakins, Gustave Caillebotte, Raoul Dufy and Henri de Toulouse-Lautrec, although they did not stay with him long and soon rejected his guidance. He influenced artists from Scandinavia to the USA. Bonnat was also a popular Salon juror, as it was felt that he would be a sympathetic judge. He was a liberal teacher who stressed simplicity in art above high academic finish, as well as overall effect rather than detail. He encouraged strong chiaroscuro and heavy modelling as well as careful drawing, the hallmarks of his own work. In the 20th century he altered his technique and produced works that show the marks of the Impressionism and Neo-Impressionism that he had so long opposed (e.g. George Cain, 1909; priv. col.).

Bonnat’s significance as an art collector dates from c. 1880, when he began collecting the Old Master drawings that form the basis of the Musée Bonnat in Bayonne (founded in 1924) and range from the Renaissance up to the 19th century.